Uploaded: Mar 19, 2014
The California Avenue Farmers' Market is set to expand this weekend, an unexpected boon from the city's massive streetscape project for the street, which began this week.

Starting this Sunday, March 23, the weekly market will extend an extra block down California Avenue to Birch Street, room that will accommodate 25 new vendors. It will still operate at the same hours, 9 a.m. to 1 p.m. 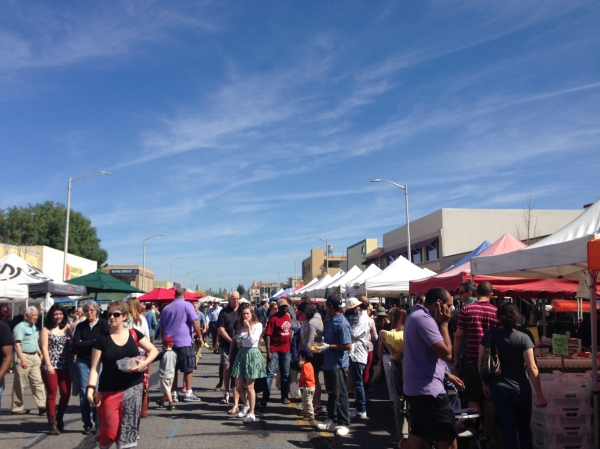 Marketgoers stroll down California Avenue the last weekend before the market's expansion.

"The city of Palo Alto came to us and thought it would be an opportune time to expand the market because we've been busting at the seams with a long wait list," said Ron Pardini, executive director of Urban Village, the organization that runs the market. "It's also an opportunity to help promote the California Avenue downtown while the construction is going on, and then continue to help draw people to those merchants that might otherwise be affected by the construction. We think it's a positive for everyone."

New vendors are bringing in a host of new food and drink options. A major newcomer is the Manresa Bread Project, a retail operation that sells bread baked at David Kinch's acclaimed Los Gatos restaurant, Manresa. (Manresa has been awarded two Michelin stars for five consecutive years; Kinch has won the Best Chef in America award for the Pacific region from the James Beard Foundation and was again nominated just this week for outstanding chef and for his cookbook, "Manresa: An Edible Reflection.")

Manresa's bread has only previously been available for purchase at Urban Village's Campbell Farmer's Market, at Pardini's request.

He said on one visit to the restaurant, he "couldn't stop eating the bread" and asked if he could buy some.

The Manresa baking team signed on with the Campbell market about a year ago; Palo Alto will be their first venture beyond that.

New meat slingers will include Barrett Farms, a poultry-focused farm in Lake County, Calif., that will sell wild game birds like quail and pheasant. Fogline Farm from Soquel will sell its fresh processed chicken and pork.

Any Peninsulites familiar with Far West Fungi at the San Francisco Ferry Building will be happy to know the specialty mushroom grower and distributor is joining the Cal Ave ranks.

On Sunday, Palo Alto Mayor Nancy Shepherd will do a ribbon cutting at10:30 a.m. A second musician will also be performing near the Birch Street end, Pardini said.

Also new to the Sunday market will be an information booth and a map of all the vendors, old and new.

For more information, go to urbanvillageonline.com.

I know from experience that bigger is better.

That may be partly true for farmers' markets, but not entirely.

Ideally, the number of stands and the balance of merchants needs to align well with the expected audience. If you have too many farmers selling the same item, none of them may end up with enough sales to justify ongoing market presence.

Likewise, if there are too many stands selling ultra-premium items, and not enough variety from vendors providing opportunities for value-conscious consumers, that will also dissuade repeat customers.

A well-managed farmers market will offer a large selection of vendors but not so much as to decrease sales to the individual merchant to make it an unappealing business venture. It's up to the market management to strike that balance which may change over time.

Report Objectionable Content
Posted by Jay Gertridge, a resident of Menlo Park,
on Mar 20, 2014 at 8:34 am

Report Objectionable Content
Posted by Resident, a resident of Another Palo Alto neighborhood,
on Mar 20, 2014 at 8:53 am


Sorry to see this as it is losing its appeal for me.

I like a farmers' market to get some great produce, cheese on my errand run. The bigger it is, the harder it is going to be to find what I want and to get on with my day. These things are becoming too irksome to use and too crowded to be practical.


does this take the pressure off the Mt View market at the train station?

it is impossible to use this station over the weekend because of how large the market has become and this is a main station on cal-train for the express and regular service on weekends.


The Mountain View farmers market does not impact train operations; I use this station all the time on weekends and I see quite a few people on the platforms, particularly for the weekend express trains or for special events (like Giants games).

The farmers market has zero impact on Saturday parking.

What it does do is curtail the availability of Sunday parking specifically in the southern three-quarters of the Caltrain lot (from about Sunday 2am to mid-afternoon), roughly 250 parking spaces. However there is ample nearby street parking and the city lots are free anyhow on weekends.

I've never found much issue in finding nearby parking on a Sunday.

I doubt if the expanded California Avenue farmers market will have much impact on the Mountain View market.