Owner Rie Rubin, a Portola Valley resident who's originally from Japan, said the cafe takes people back in time ? both culinarily and physically.

"We are trying to bring back the good old method of cooking and baking that actually eliminates a lot of additional ingredients or additives," Rubin explained. "As a result ? our bread is milder and gentler and actually feels good after you eat it. It makes a big difference."

All the baked goods ? breads, baguettes, croissants, tarts and the like ? are made from scratch in house, much of them behind a clear glass window inside the cafe so patrons can see the baking process for themselves.

Physically, Voyageur du Temps is housed in one of Los Altos' early train stations, built on 1st Street in 1913. The long, horizontal craftsman-style building is still reminiscent of a station ? and a meeting place, Rubin said. 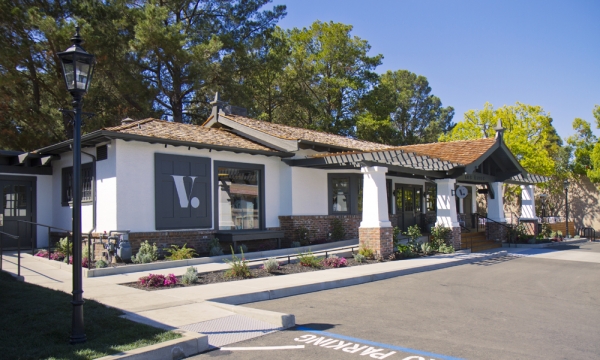 "We made sure to keep that historic aesthetic that creates a common space where people can gather and meet their neighbors, get drinks and great food," she said.

The 3,000-square-foot space has indoor and outdoor seating, enough to accommodate more than 100 people.

To run the kitchen, Rubin brought in two chefs from Tokyo, Nobu Hoyo and Hinobu Toyama, both of whom studied in Paris and were taught by French chefs.

They're baking a range of sweet treats ? danishes, fruit tarts, croissants of all kinds, something called a caramel cube, bread pudding, Japanese pastries and more ? as well as savory. And they're taking it seriously. Rubin said the staff spent three months perfecting their croissant recipe, and she actually asked job applicants to bring a baguette and croissant to interviews.

Salads and sandwiches are served all day; most hover in the $9 to $11 range.

And what would a cafe be without coffee? Voyageur's comes from Cafee Vita, a Seattle coffee company that sources beans directly from coffee growers in more than 11 countries, according to its website.

"(The coffee) is great by itself, but we are a cafe serving pastries and baked goods so it was very important to find something full body and gentle so it pairs really well," Rubin said.

The cafe also serves tea from Bellocq, a high-end "tea atelier" based in New York (originally from London).

Rubin is a fomer Los Altos resident who left her longtime job at a tech company to raise her children.

"But I always had a desire to open a coffee shop someday," she said.

Voyageurs food are not good French recipes. Some of the food has too much or too little of the main ingredients. Some of their recipes too heavy for today's culinary approaches. The supervisor is reluctant to listen to any comments even tough he asks to the customer's how were their thoughts about the food. Bread choices for sandwiches are wrong, it is hard to bite. Real baguette is supposed to be soft like in LA BAguette Stanford mall. I really want Los Altos have good quality places to eat. I would like to tell these to the owner. Possibly he does not know, he does not have a contact number or e-mail. I wonder how he is going to run his business without any comments from his customers. The only items were good that we tried after several times we went there were cold corn soup and a few cashiers treating customers with a big smile. But again the food is not good, and not edible choices. We eat gourmet and travel around the world quite a bit. This place is not casual, not gourmet, not café, not ordinary, just has good new furniture. Sorry! I wish I would be able to write something better, but we tried eight-nine bakeries and savories none were good. As a cookbook author I ate in so many places, even the average place would have some fine food, but this place did not have it. Maybe some of their pasteries were good but we are already eaten enough to disappoint ourselves so we will try other tewo locations opened until the owner realizes he needs to give attention to the customers personally. It was also disappointing to read this is by gourmet chefs. We live in Los Altos

Report Objectionable Content
+   3 people like this
Posted by Luz, a resident of Another Mountain View Neighborhood,
on May 15, 2016 at 1:57 pm


Please.... give this Voyageur du Temps some time! It brings bad vibes and it is mean to degrade a new place as this 'author' Serena... has done. Not nice....not nice at all. This writer could have said it in a few words..... such as: According to my standards..... not up to what I like. PERIOD. Do not hurt people by your comments. You do not gain anything except making a big thing out of ..... "Just not my taste". Thank you... and please watch your words. Our world is sad enough . Be nice. Luz


I plan to visit this new cafe' Voyageur Du Temps. I bet I'll find something there I will enjoy! Luz

Jumping on a bandwagon that ends up breaking down
By Diana Diamond | 21 comments | 4,876 views