Other dishes include pastas, Neapolitan meatballs and mussels with fresh chilies and garlic.

Delfina dessert is all things gelato, whether it's by itself, in a kid's cone, a root beer float, affogato, amarena cherry sundae or between two brioche buns (think a sweet slider, almost). All gelato is made in house.

Special to the Palo Alto pizzeria is a full bar, headed up by the company's head bartender, Alex Phillips. (Phillips' main post is at Rome-inspired Locanda in the Mission in San Francisco.)

Phillips said the opening cocktail menu will have about seven cocktails, mostly variations on Italian classics like the Negroni (traditionally gin, vermouth and bitters, usually Campari). A fresh, outdoor-patio friendly drink that will make an appearance is the Mio Mao: vodka or gin with lemon, Aperol, cucumber and mint. Drinks will range between $9 and $11, Phillips said.

The wine list will feature both Italian and California wines, an expansion for Italy-focused Delfina. There will be about 25 to 30 bottles offered, all available by the glass.

Beer on tap must include staples from both regions the restaurant represents: Anchor steam for the Bay Area and Peroni for Italy (among others).

The revamped Emerson Street space might be unrecognizable to locals who patronized Empire Tap Room ? dark wood has been replaced with light, the wall behind the bar is now white-tiled and another in the back by the kitchen is covered in bright blue tiles. Owner Craig Stoll said the blue tile is inspired by fish markets in Naples where the vivid ocean-blue color is abound.

Tables in the outdoor patio, which make up more than half of the restaurant's seating, are made from recycled Robert Mondavi wine barrels from the 1970s, Stoll said. A wall to the left of the front doors is now a chalkboard where patrons can put their names on a waiting list.

But underneath seat cushions of the same bright blue hue at some of the indoor tables hides one remnant of what used to be: wood repurposed from the Empire Tap Room bar top. 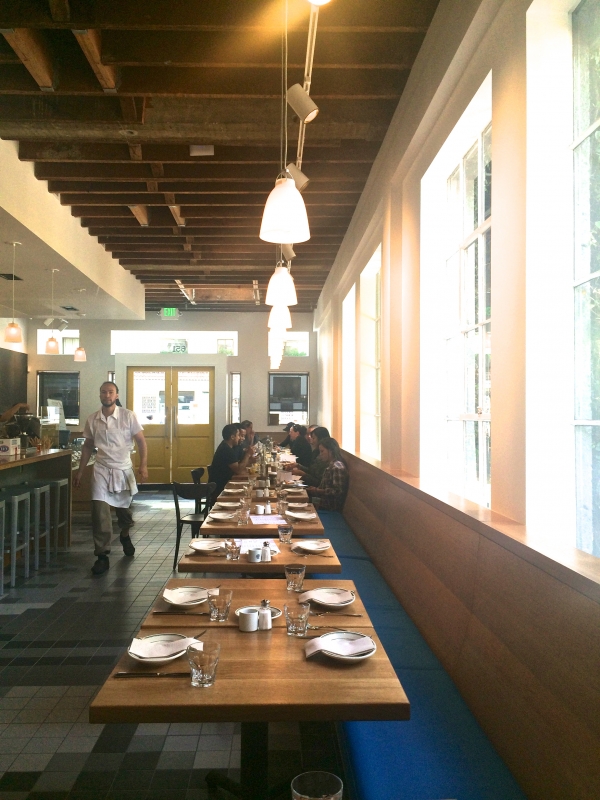 Above: A line of indoor tables at Pizzeria Delfina. The bench below the blue seat cushions is made from wood from the Empire Tap Room bar top.

Takeout is also available; no delivery at the moment (but Stoll said he's thinking about partnering with a local delivery company down the line).

Can the Memphis police behavior ever happen here?
By Diana Diamond | 41 comments | 2,391 views