Uploaded: May 15, 2014
A few weeks ago I placed an MPPD Police officer into handcuffs - after I twisted his arms into a painful hold. This was part of behind-the-scenes workshops provided by MPPD in their Community Academy ? a 9-week course (in March and April) introducing many roles and specialized teams within the Department. In view of a more favorable budget environment, Communications Officer Charleen Manning resurrected the Academy at the request of Chief Robert Jonsen.

The course was divided into 9 sections.

The Academy appropriately began with a welcome from the affable Chief Jonsen. He explained the motivations for the program: outreach from the PD to neighborhoods, outreach between neighborhoods, and education of potential volunteers to potentially supplement PD operations. Reflecting the preparation by the department, each participant was provided with a personalized binder of materials for the duration of the course. After introduction to the organization chart of the department we took a walking tour of the 'cop shop.' Inside the Communications Center we observed the intake of calls from the public and dispatch to patrolling squad cars. Also visible are views from several cameras at key intersections.

Officer Felicia Byars led the section on Domestic Violence (DV). A couple of officers (and Explorers) and students went through some role-playing of the encounters between the DV responders into domestic situations. The use of cameras in DV (as well as other situations) allows the officer to record the interaction with the public. While I personally am not wild about various photography of the public around town, the point was ably made that in DV situations these recordings are crucial to portraying the exact situation encountered by the officers should they need to testify months afterwards. Another point made was the preference to diffuse situations and move the parties to the proper social agencies and opportunities for resolution.

Traffic enforcement is probably the reason of the most of our interactions with the PD. The session began with the possible risks to the officers during a traffic stop, techniques to evaluate the vehicle occupants, tactical placement of the cop car in relation to the stopped, and how to get people out of the car with minimal mayhem. The highlight of the evening was role-playing cop and bad guy at a traffic stop. Several students got to drive the police cars; some turned the flashing lights on and off.

A tour of the San Mateo County Crime Lab began with a demonstration of the Lab's new 3D crime scene camera. Placed in the center of a room, this scans the area allowing remote virtual forensic work such as distance measurements. The lab manager then took us on a walking tour, stopping at three main forensic areas: DNA, fingerprints and ballistics.

Another participatory exercise was a Crime Scene Investigation. Officers set up a mock crime scene outside the Recreation Center. A yellow balloon represented a body in the driver's seat; there was blood on the ground, bullets in various spots, a fake weapon. The general technique is to examine wide areas and then close in on details. We searched the car, lifted fingerprints, bagged evidence, and searched the trunk for any surprises.

A full Saturday at the VA Campus covered several topics: defensive tactics (where I got to handcuff an officer), and demonstration of less-than-lethal weapons using the hallways of an abandoned hospital building. This included beanbag shotguns, a 40mm Styrofoam cannon, and practice paint cartridges shot with an AR rifle.

A third section used a federal tactical simulation theater and a pistol retrofitted with a laser. We were shown a series of short clips were projected on a screen from which we were to quickly assess the situation and decide whether and where to shoot. Like many things introduced in the academy it was harder than it looks. 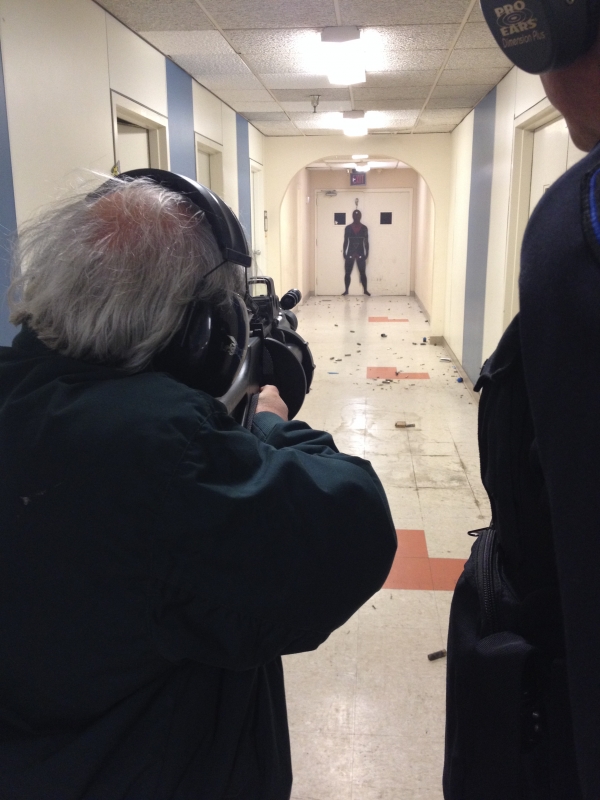 Awaiting us for Week 8 at the Onetta Harris Center were several unsavory characters hanging out along one wall. I thought, "This is interesting, they brought gang members to speak to us." Sometimes I'm naive. These were some undercover cops and they sure looked the role. The lectures covered drugs; evidence bags from a closed case including meth, grass and crack were passed around. About $50,000 in street value made its way between students' hands. The lectures on drugs also discussed the organization of gangs and their ecosystem from the streets into prisons, that sustains them ? and keeps much of California employed. 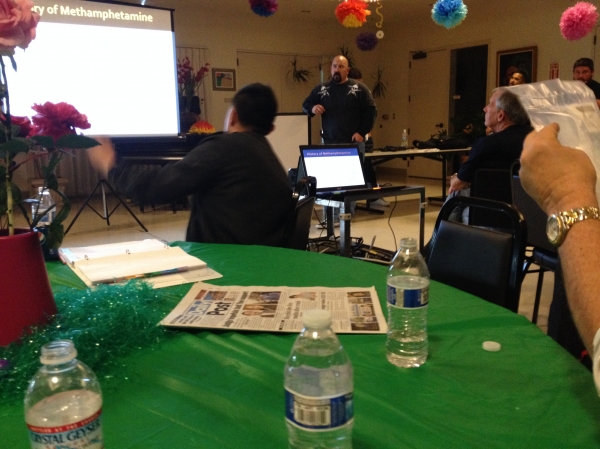 The SWAT Team presented the last formal session covering critical incidents, hostage negotiations, and other high adrenaline activities. They enacted a mock assault on the rec center showing how they would clear a room. 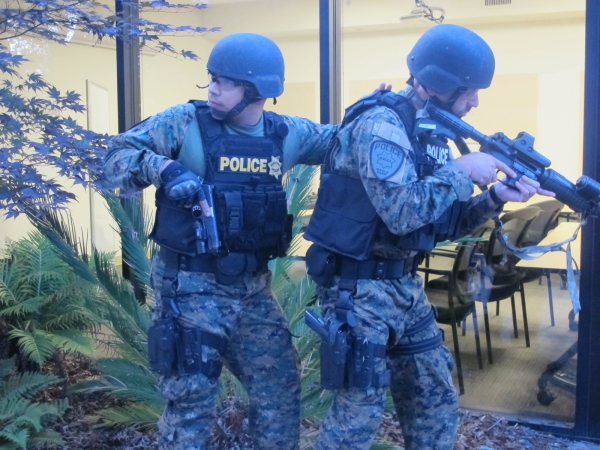 Included in the Academy was a 'ride along' with a patrolling officer. In response to my question, "Who's fun to ride with?" several officers quickly offered the services of "Steve Neumann." Ride with Officer Neumann I did, on a Friday night illuminated with full moon. In the period of an hour and a half our car responded to about 5 events on the east side, either as primary car or backup. Drug stops, felon screenings - interesting to say the least. Officer Neumann explained that the operational strategy is suppression early in the evening. Word then spreads that Menlo Park is not the place to hang out and transact business tonight. After an hour and a half activity quieted down.

The Academy was a really worthwhile program and the MPPD is to be commended not only for putting this together, but for how many officers are engaging speakers and so knowledgeable of their topics. Chief Jonsen has worked to improve morale - many officers are vocally supported the chief's efforts and are happy to be in Menlo Park.

I had the pleasure of attending the academy with Stu. I cannot say enough good things about the Menlo Park police department. I have a renewed respect and admiration for the entire department. If you have the time you should really contact Charlie and attend the next academy; you will not be disappointed.


Thank you-- this was so interesting to read. I wonder if there is an opportunity for local students to tour the crime lab?


That was a great story. If I had the time, I 'd sure like to attend that Academy.

Food hall forage: What we ate at State Street Market in Los Altos
By The Peninsula Foodist | 3 comments | 9,256 views

Princess Diana: "There were three of us in this marriage, so it was a bit crowded."
By Chandrama Anderson | 0 comments | 2,760 views