A Fatal Accident Waiting To Happen

If once is an incident, twice is a coincidence, and three times is a pattern, then eight major incidents on a single corner is a sign that there is a very real--and potentially deadly-- problem. This is certainly the case of repeated car accidents caused by cars jumping the curb and causing massive damage to an office building on Haven Avenue in Menlo Park. Unfortunately, jurisdictional issues present challenges to Menlo Park being able to implement measures to improve safety there.

According to Gary Williams, the owner of the office buildings at 3705 and 3723 Haven Avenue, there have been eight major accidents in front of his property over the past twelve years, including two involving drunk drivers. This year alone, there have been two major accidents, including one on Valentine's Day in which a car crashed through the office of John Freier, CEO of startup Statricks, who had gone home with a headache only an hour earlier. The incident cost Statricks between $15,000-$20,000 in demolished equipment. More importantly, had he not fallen ill and gone home, Freier would have likely been killed as the car crushed his desk and chair. 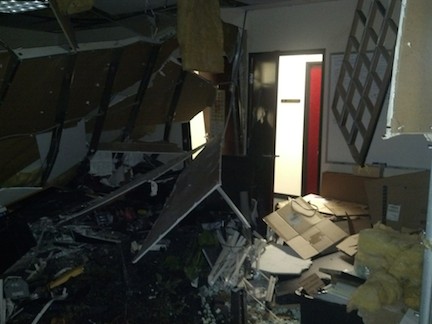 The office building, which received over a million dollars in renovations to attract high tech companies, is on the corner of a 90-degree turn in an area that is "pitch black" at night because it is void of streetlights. According to a letter Williams sent to the City Council this week, he has done everything he can to protect his building and its tenants, including installing 25,000 pounds of boulders, massive steel "I" beams, metal posts, and a steel-reinforced wall out in front of his building. Despite his efforts to buttress his property, in order to truly make this stretch of corridor safer, Williams believes that a streetlight and a guardrail with reflective paint need to be installed, and he is appealing to the City to take up this safety issue.

The problem is that Menlo Park doesn't hold all the cards.

According to Jesse Quirion, interim Public Works Director for Menlo Park, and Nikki Nagaya, the city's interim Transportation Manager, Haven Avenue from Bayfront Expressway to the 3723 Haven frontage is within Caltrans right-of-way. They point out that the City has notified Caltrans that the area is a problem, and confirm that they are working with Caltrans to study the situation and find a solution, such as a guardrail, that would reduce the frequency and severity of these collisions. However, because this stretch of road is within Caltrans jurisdiction, Caltrans would need to install the guardrail or grant the City a permit to install any modifications. They note that Caltrans did come out earlier this year to enhance the striping and reflectors in the area. Furthermore, Quirion notes that the City is working with the developer constructing the new apartments on Haven Avenue and that the city is "proposing improvements to this corridor which will be funded in part by grant funds and in part by the developer, however these improvements will need to be reviewed and approved by Caltrans prior to implementation."

Menlo Park Police Commander Bertini explains that when it comes to safety, there are "three Es": enforcement, education and engineering; when it comes to that third engineering piece, the "whose jurisdiction is this?" question is a major challenge. Safety concerns that are high on the radar of one constituency may not be high on the list of priorities of another. Adding to the challenge: Menlo Park has a curious mix of borders, with segments of the same street (e.g. Valparaiso) belonging to Menlo Park, Atherton, the county, and Caltrans. Getting an engineering change through one governmental process is a challenge, let alone multiple.

The net result is a process that feels painfully slow for Williams, who tried to initiate a request for a streetlight back in April of 2012. Because the City would need to apply to PG&E for an encroachment permit and submit a request for electrical service, the streetlight has yet to be installed.

But with the increase in vehicle, pedestrian, and bicycle traffic sure to come along with the completion of hundreds of apartments near Facebook, Williams is hoping that Quirion and Nagaya will be able to make a strong case to Caltrans that safety improvements must be done?and done quickly. John Freier is certainly hoping for those improvements so he can work in his office with something he hasn't had since last Valentine's Day: peace of mind.


For more pictures of damage done to the Statricks offices, go to: http://blog.statricks.com/that-time-a-drunk-driver-ran-into-our-office.html#sthash.T99vciBR.dpbs


This is a great article. It is unfortunate that sometimes the easy solution is much harder than it seems when different interests have shared responsibility over a problem area. Rather than coming together to solve the issue, people and agencies just take care of their own interests, whether that means shunting the responsibility onto others or taking credit for things they didn't do. At least we have a process that will theoretically one day fix this one issue at least.