Uploaded: Sep 11, 2014
I wrote about Downtown, a Palo Alto app started by a group of foreign entrepreneurs, when they first launched this April. The concept of the app was to create a virtual version of Palo Alto's downtowns, so people could browse retail stores or restaurants' offerings from the comfort of their own home or office, place orders and get items delivered to their door within about 30 minutes.

As many Silicon Valley entrepreneurs are trying to achieve today, the goal was to disrupt the way we purchase things, and to give a leg up to Palo Alto's small business owners.

The app's creators have since pivoted, launching a new app last week in partnership with Coupa Café that allows customers to place orders from the comfort of their own table. No waiting in line; no dealing with cash at the register. The Ramona Street café is now equipped with iBeacon technology from Estimote ? basically small wireless sensors that can be attached to any location or object that broadcast radio signals -- so café employees are pinged the location of your order when its placed.

And instead of Downtown's original concept, where there was a curated, much smaller list of menu items or a clothing store's best sellers available for purchase, Coupa customers can order from the entire menu. They can swipe through photos and descriptions of the food and drink without having to stand in line.

Here's a screen shot of one part of the Coupa menu: 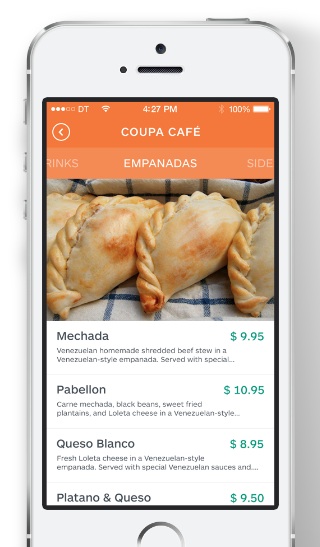 There's a clear advantage ? mostly convenience ? for the consumer, but Downtown is again claiming big benefits for smaller brick-and-mortar businesses struggling to make it in today's economy.

"In this time of wireless business, we thought it was time to disrupt the current way brick and mortar retail shops were helping their customers," Downtown co-founder and CEO Phillip Buckendorf said in a statement.

"By using Downtown, business owners gain more flexibility, reactivity, and better menu visibility," a press release announcing the app reads. "They also maximize their employees' performances by focusing on the quality of food and beverages rather than technical difficulties at the register."

It makes complete sense that Downtown has launched at Coupa, where Silicon Valley entrepreneurs often hob nob over Venezuelan coffee and customers can pay with bitcoins.

"Overall I'm impressed," Coupal said. "It's doing well beyond what I imagined."

Buckendorf said on Thursday what the team launched in April was "from the beginning more considered as a proof of concept. That allowed us to understand local commerce in a better way."

It also, of course, allowed them to build relationships with a range of local businesses. Buckendorf said they plan to expand the new payment app through partnerships with other shops. Next week, they'll be launching at John's Café on Lytton Avenue.

The app is only available for iPhones at this time. Go to downtownapp.co for more information.

And by the way I have half a mind to walk into Philz one Sunday, jump the line and abscond with someone else's pre-order joe. Ludditte that I am.

Report Objectionable Content
Posted by Mark Weiss, a resident of Another Palo Alto neighborhood,
on Sep 16, 2014 at 12:03 pm


I'd like to write a version of "Fire in The Hole" about this, and it's impact on workers. I like the people who take my order. I don't like Mr. Buckhalter or whoever.

Ich bin ein frankfurter. Make me one with everything. Confederacy of dunces.

Report Objectionable Content
Posted by Mark Weiss, a resident of Another Palo Alto neighborhood,
on Sep 16, 2014 at 12:06 pm


meanwhile the talking doughnuts at borrone market speak for themselves, no app, just appetite.


Here is Hazel Dickens doing Fire in the Hole as heard in "Matewan" a movie about workers rights. My apologies to Elena and her readers for flitting between hot dogs, jelly donuts and arepa. On my own blog I can tie together the whole farrago.

Think jelly in the whole not fire in the whole and you can almost taste it. This is also an oblique Rachel Kushner reference. (Italian motor cycles shooting flames and carving desert sands. Or dessert. I forget. I met a guy named Costa who played tennis for Serra and now rides bikes for his kicks. Met at Zot's. A.J. Costa. Probst!

I'm on a roll here, Kaiser. Congrats to Jacquetta for her Athena. there is an ad in the print edition of PaW.


I don't have a smart phone and don't even want one. Will the staff even look up to see real people waiting to order?

State Street Market plans overhaul of its eateries as it cuts ties with Bon Appétit, triggering layoffs
By The Peninsula Foodist | 11 comments | 4,012 views

Doing more with the natural spaces we have
By Sherry Listgarten | 6 comments | 2,616 views

Can the Memphis police behavior ever happen here?
By Diana Diamond | 0 comments | 114 views