Ogden has transformed a massive 4,000-square-foot space at 1165 Merrill St., across from the Caltrain station, into his vision of a modern California "diner," drawing on the now widespread farm-to-table sensibilities he helped pioneer throughout his career.

Early iterations of the menu, which Ogden showed me on a visit to the restaurant a few weeks ago, include starters like wood-grilled artichoke with chanterelle and Dungeness crab salad; beef steak tartare with apple and caramelized onion mustard, quail egg and anchovy parsley toast; Littleneck steamed clams with lemongrass, chilies, lime and spicy oyster sausage. (Now do you get why I put diner in quotes?) Dinner options range from mushroom toast and popcorn shrimp to fish and chips, pot roast and an oak-grilled chuck burger. Don't miss Ogden's famous butterscotch pudding or apple turnovers for dessert.

He said he's checked out the Menlo Park farmers' market and has been making connections with local farms to supply the restaurant.

"The whole concept is American diner plus organic (and) natural," he said.

Armed with a full liquor license, BFD will also have a daily happy hour with artisan cocktails, beer, wine and discounted small bites. Check out the full drink menu here.

Sure to be popular for brunch-starved Peninsulites is a large brunch menu with everything from pigs in a blanket and doughnuts to smoked salmon sliders, buttermilk pancakes, short rib hash and steak and eggs. Grab an "eye opener" to wash it all down: a Bradley's bloody mary, BFD bellini or blended champagne and watermelon margarita. (There's also plenty of coffee and fresh-pressed juice.)

"The whole idea of it is this new vision of what a diner should be from an American-California viewpoint," Ogden said. "(It's) an all-day sort of fun place just to hang out, to have a glass of wine or a beer."

Ogden, a James Beard award-winning chef, worked as executive chef at San Francisco's Campton Place Hotel in the early 1980s before opening his own The Lark Creek Inn in Larkspur in 1989. Numerous fine-dining restaurants throughout the Bay Area to follow would become part of his Lark Creek Restaurant Group. (He said he actually looked at the Merrill Street space in the '90s, hoping to snag it, but had no luck.) A restaurant he opened in Las Vegas in 2003 ? Bradley Ogden at Caesar's Palace ? earned him the much-coveted James Beard award for Best New Restaurant in 2004.

Ogden said the Menlo BFD actually has a similar feel to Lark Creek, which he described as "housey" and comfortable. Despite its large size, the plantation-style building does have that feel. Inside there is repurposed wood, exposed brick, bulb lights and deep booths. 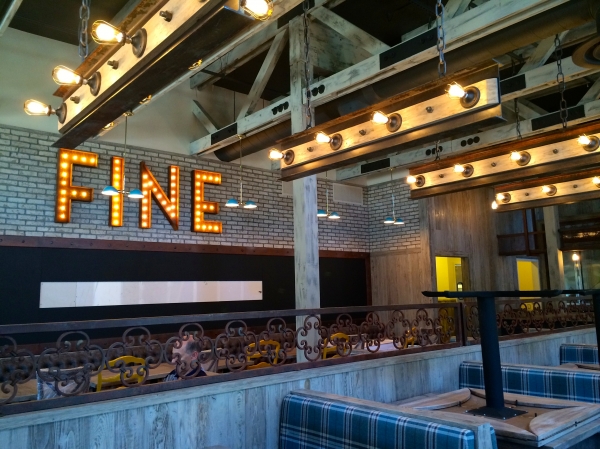 Outside along Merrill, there's the same wood-plank wrap-around porch, which seats about 60 people.

Ogden got the space this time around through his partner, Atherton entrepreneur Chris Kelly, who recently purchased the building. Gambardella's closed in December 2012; at the time, it looked like neighbors Crepes Cafe and Lisa's Tea Treasures would remain, but both eventually closed.

When Crepes Cafe announced its closure in July, owner Janet Scopazzi posted a message on the cafe doors that said the building's new landlords had "other plans" for the space, located at 1195 Merrill St. A longtime cafe employee told the Almanac that BFD would be taking over the entire building, which it has.

Ogden said Crepes Cafe "decided to leave," leaving him a 2,000 square-foot space that he might turn into some sort of BFD spinoff, though he's not sure what yet.

BFD is one of a few more casual concepts for the fine-dining chef. They're all housed under the umbrella of Bradley Ogden Hospitality, a restaurant group and consulting company started by Ogden, his son (and chef) Bryan Ogden and industry veteran Tony Angotti.

Menlo Park is the second BFD location (following Houston) and Ogden promises there will be many more. After living in San Jose for the past few years, he's relocated to the Peninsula, so he promises to be hands on at the new restaurant.

BFD? Yet another naive name choice in the world of LOL and OMG. Obviously Bradley wouldn't listen to his branding people.


I have eaten at many of Brad's fine restaurants including the original Lark Creek Inn & Yankee Pier (Larkspur) One Market and Lark Creek Steak (San Francisco), Lark Creek Walnut Creek, Lark Creek San Mateo (now closed), and Parcel 104 (Santa Clara Marriott). If Brad's Fine Diner is even half as good as his other restaurants it will indeed be a BFD!

I also predict that the talk among Menlo Park foodies will be which is the best Menlo Park restaurant Madera or BFD?

However,the best value Menlo Park restaurant in my opinion is Trellis. Kurt provides a very good meal for a very reasonable price (about half what Madera and BFD will charge).


I am always happy to see something new come to town; I hope it"s"reasonably" affordable, so it will become a mainstay. My concern is the parking? It looks like it can seat a lot of people, but I have heard nothing about the restaurant or the city addressing the parking issues. I live very close to this place, and my street is already packed with the vehicles of all day train commuters. Does anyone know what the plan is for parking? The adjoining condos have underground parking, but I don't know if they allow for the restaurants. The train's lot is small, and always full, already...just wondering??


Reading this just makes me long for a real diner in the area. Sigh. Oh, and I'm sure clients of the nearby veterinarian will be out of luck trying to park. Dang.

"Ogden said Crepes Cafe "decided to leave," leaving him a 2,000 square-foot space that he might turn into some sort of BFD spinoff, though he's not sure what yet."

is hardly a reflection of what is the real truth.

Crepes was forced to leave in a bitter confrontation with the landlord -- she did not just "decide to leave". [Portion removed.]


Yeah, I know that Ann's is still on Santa Cruz.

I_Won't - did the landlord force out Crepes Cafe, knowing that BFD wanted to take over the space?


The person who answers the phone to schedule reservations is very rude and not a great way to start a new local neighborhood restaurant.


We were so sad to see Gambardellas, Crepes Cafe and Lisa's Tea Treasures go. We have been anxiously anticipating the new restaurant to make it our new favorite weekly spot. We have tried repeatedly to get a table on weekends and weekdays when the restaurant appears almost empty. We are always told there is no availability. Needless to say, we have given up and will stick with wonderful local restaurants such as Carpaccio, Borrone and Left Bank. Too bad!

What Local Teens are Saying
By Sherry Listgarten | 19 comments | 2,756 views