Uploaded: Nov 14, 2014
After about a year and a half of business in Palo Alto, Tin Pot Creamery is expanding with a second location due to open in Los Altos this month.

The small-batch, artisan ice cream shop will have two prime locations come Nov. 21: the original at Town & Country Village and the new at 201 First St. in downtown Los Altos.

Owner Becky Sunseri ? a former Facebook pastry chef with a deep love for all things sweet ? said the Los Altos shop will be pretty much the same as Palo Alto, but "more streamlined" with 12 instead of 18 flavors. The ice cream will continue to be made at the Palo Alto store's kitchen and delivered by ? wait for it ? a milkman to 201 First St.

The new space is roughly the same size as Palo Alto's serving area (most of the Town & Country space is dedicated to a back kitchen and clean room), Sunseri said. There's also ample outdoor seating.

The second locations' menu might be smaller than Palo Alto's, but it will open with some exclusive seasonal flavors, Sunseri said. Don't miss pumpkin with oatmeal pecan streusel and eggnog with boozy caramel swirl, to name a few.

It will also have the "tried and true" ice cream flavors and Tin Pot's baked goods and coffee offerings. At Tin Pot, everything ? the ice cream, the toppings, the cones, the baked good add-ins ? is made in-house with locally grown, organic ingredients. 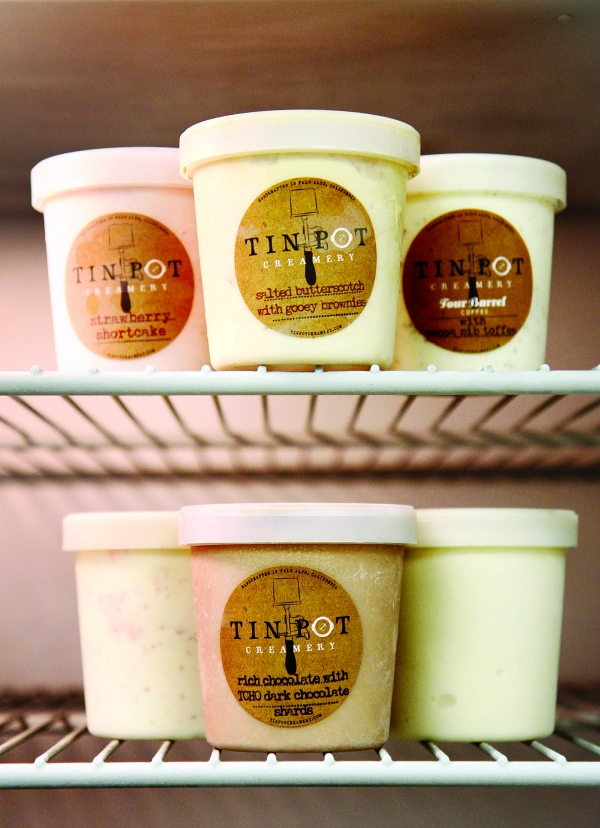 Based on how Los Altos goes, there could be more locations in the works, she said.

"It's been fun," Sunseri said. "I'm just trying to ride the momentum."

A great place to wind down with a treat after work.


who cares? it is amazing that people get paid to write fluff like this. What is next ? Someone selling Cotton Candy for an exorbitant price in Los Altos or Atherton?

Any given piece of writing on the Internet is not intended for everybody.

Here's a hint: Peninsula Foodist is a restaurant blog that focuses on mid-Peninsula eateries. If you don't care about that, DON'T READ THE BLOG.

There are probably great blogs about curling on the Internet. Guess what? I don't read them BECAUSE I DON'T CARE ABOUT CURLING. If people who do care about curling read them, that's great, hope they enjoy them.

That said, this is about a local business patronized by local residents, employing local people, making their own products in house. It is relevant.

It wouldn't make much sense to write about a gallon of some cheap generic vanilla ice cream sold at Safeway.

A fond farewell from the Peninsula Foodist
By paloaltoonline.com | 13 comments | 4,148 views

Palo Alto has an escalating transparency problem -- the police have shut their doors
By Diana Diamond | 6 comments | 1,575 views