New information on Cho's in Los Altos has been posted here.

The restaurant, which sold potstickers, pork buns and the like on the cheap for 35 years at 213 California Ave., announced the news on its Facebook page today, Dec. 12.

"Something new is coming to Los Altos," the post reads, with a photograph of the new restaurant at 209 1st St. According to Yelp, the space was most recently occupied by Chris' Fish and Chips and is near the corner of State Street.

The 2,337 people who signed a Change.org petition to keep Cho's open on California Avenue will surely be over as soon as they open. 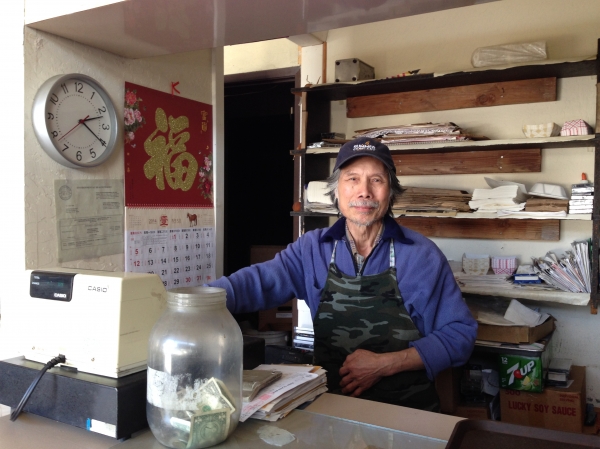 Above: The restaurant's namesake and co-owner (with his wife) Cho Yu at the now-shuttered California Avenue location in January 2014.

Report Objectionable Content
Posted by pogo, a resident of Woodside: other,
on Dec 13, 2014 at 2:17 pm
pogo is a registered user.


I will check it out! I never went to the one on California Ave. My dim sum has been limited to Ming's...

Report Objectionable Content
Posted by Hmmm, a resident of East Palo Alto,
on Dec 13, 2014 at 8:30 pm
Hmmm is a registered user.


I'm glad to hear it, and look forward to it.

Report Objectionable Content
Posted by lindaloo, a resident of Mountain View,
on Dec 14, 2014 at 11:42 am


Wonderful news to wake up to (yes, late on a Sunday a.m.) Cho's and downtown Los Altos FTW!

Report Objectionable Content
Posted by pogo, a resident of Woodside: other,
on Dec 14, 2014 at 12:56 pm
pogo is a registered user.


we've been eating Cho's dumplings for about 33 years - includes their old place
in mt view. can't wait till we get back onto our old eating habit.
any clues as to reopening date? any menu change? pricing?
good luck to Cho and Daisy at the new location.

Report Objectionable Content
Posted by Palo Alto Changes, a resident of Another Palo Alto neighborhood,
on Dec 17, 2014 at 2:58 pm


University Arts moved to Redwood City and now another great "Palo Alto" treasure moves away; this time to Los Altos.

Report Objectionable Content
Posted by whatever, a resident of Menlo Park: Central Menlo Park,
on Dec 17, 2014 at 4:54 pm


Cheap yes. But I can also take frozen dim sum out of my freezer just like Cho does, and then throw it in the steamer or frying pan.