Eggs and Bacon Walk Into a Bar

Eggs and Bacon walk into a bar.
Eggs: "Bartender, we want a drink."
Bartender: "Get outta here, I don't serve breakfast."

Ok, my joke repertoire is smallish, but this is the perfect entry into a blog about bacon, eggs (and beer). In Eggs with Legs, we learned egg proteins coagulate at 70°C (158°F), an important lesson when making hard boiled eggs, or my variation - Deviled Eggs with Bacon and Pickled Jalapeno.

There are many tips and tricks about making and peeling hard-boiled eggs. I have tried them all. Here's my suggestions. Please share yours.

How to hard-boil an egg:

Place eggs in a sauce pan and cover with cool water an inch or so. Bring the water to an easy boil, cover the pan immediately, turn off and remove from heat. Let eggs sit for 12 minutes (or so). Drain, run cold water over the eggs, place into a bowl of cool water, and into the refrigerator until cool. If you take the extra time to crack slightly after cooking, the cool water can leak in making the shell easier to peel. Maybe. Do not overcook your eggs! Not only will they be rubbery, you may also create a green ring - still ok to eat, but not as nice looking. And remember, since eggs coagulate at a temperature below the boiling point of water, you don't actually want to boil them. Review time ? what temperature does water boil at?

Also - older eggs (store bought compared to farm fresh) actually peel better because as eggs age, the shell absorbs air which creates space between egg and shell, making it easier to peel. Time for kitchen yoga - stand up, head over and have at it!

Start "boiling" your eggs. While this is happening, lightly boil the vinegar and sweetener in a small saucepan a few minutes, until sweetener has dissolved. Transfer to a bowl, add jalapeno slices, let cool in the refrigerator. The longer they sit, the more they will pickle. Over night is fine, or however long you wish.

Cook your bacon. I bake mine on a wire rack placed over a baking sheet at 400°F until crisp, 8 minutes or so. Turn over half way through the cooking. Saute vegetables in the bacon fat later.

When ready to assemble, inspect both tips of your hard boiled egg. Find the side where the yolk is closest to the tip. Slice off the white and only enough of the yolk to carefully release and pop it out. On the other end, slice off only enough white so the egg can stand. Eat the whites and transfer yolks to a hand strainer.

Push the yolks thru the strainer with a fork (this optional step ensures a smooth filling). Add mustard - salt and pepper; mix well. Carefully spoon the filling into the egg white and mound at on top. Garnish with a pickled jalapeno and piece of bacon. Drink with a beer. Yum! 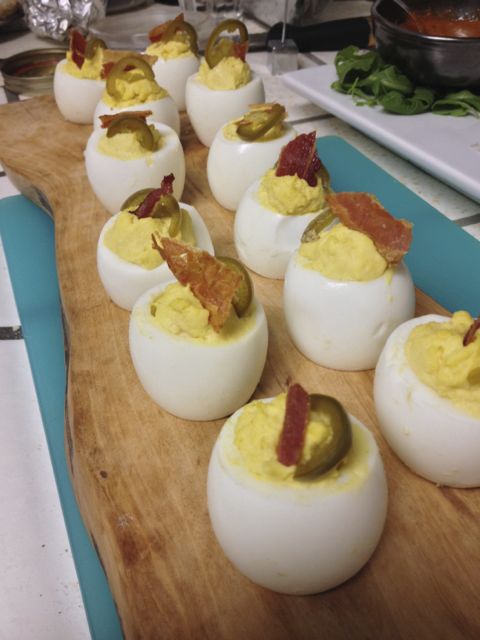 Speaking of bacon and beer, here's a Food Party! comin' to town ? The Bacon and Beer Classic. Wow. We'll be chowing down on both while groovin to DJs, interactive games, beer schools, and cooking demos. I hope someone samples gruit, a trendy beer found at places like Woods Beer Company in Oakland, and on tap at Magnolia Brewing Company in the City. Gruit is made with bitter herbs other than hops, herbs as such as rosemary, yarrow, bay leaf, hibiscus, and yerba mate. Anyone try it yet? 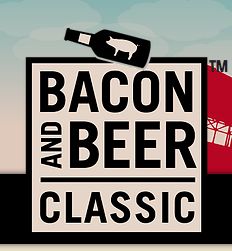 * TIP: Remove vein and seeds easily by inserting an old style vegetable peeler into the jalapeno, twist and remove.

P.S. Beer and eggs was the Breakfast of Champions at Grandma and Grandpa's Blind Pig in Detroit. Know the difference between a Blind Pig and a Speakeasy?

P.S.S. Still hopin for ideas on places to visit or the "Whole Foods" of China. Shanghai. Beijing. I know you are out there.....

Pull eggs out of fridge, soak in hot tap water so they aren't icy cold (no need to bring completely to room temperature). Meanwhile, boil water for cooking.

When the water is boiling, submerge eggs gently into the water. I don't bother adding vinegar and/or salt to the cooking water. Start the timer and cook 11-12 minutes, if the water returns to a low boil, reduce heat to low simmer. Remove eggs and shock in cold/ice water bath.

(Note: water for hot bath and cold shock can be used for other purposes, including plant watering. If you don't add anything to the cooking water, you can repurpose that too.)

Report Objectionable Content
Posted by Food nerd, a resident of Another Palo Alto neighborhood,
on Feb 27, 2015 at 2:00 pm

Descartes walks into a bar. Bartender says, "a beer for you?" Descartes says, "I think not!" and disappears.

The Dali Lama walks up to a hotdog stand and says, "Make me one with everything."

Report Objectionable Content
Posted by Laura Stec, a resident of Portola Valley: Westridge,
on Feb 28, 2015 at 6:42 am


Food nerd, you may be a nerd but you are also a Food Partier! Thanks for the laugh. Hi Single Guy. You are quite the kitchen aficionado. Ladies, this guy's got promise, no?

Report Objectionable Content
Posted by A Single Guy, a resident of Old Mountain View,
on Feb 28, 2015 at 3:33 pm

Report Objectionable Content
Posted by BroIL, a resident of Atherton: Lindenwood,
on Feb 28, 2015 at 8:44 pm


Well, well well... May I suggest a hard boiled egg, a dollop of horseradish, and a fine hand crafted IPA? Now that is "egg with your beer"

Report Objectionable Content
Posted by Laura Stec, a resident of Portola Valley: Westridge,
on Mar 1, 2015 at 9:00 am


BroIL, may I suggest that horseradish is homemade? Sto lat!

Can the Memphis police behavior ever happen here?
By Diana Diamond | 1 comment | 216 views