Soil Enlightenment, City of Palo Alto, and Horton Hears a Who

My former housemate, Paul Schmitt, is the only guy I ever met whose first action in the morning involved dirt. He wouldn't make coffee or check the news; he'd wake up, go outside, and start playing in compost.*

Paul had great compost, but I never realized the extent of his craft until I moved from Palo Alto to Portola Valley. As a goodbye gift, Paul gave me a bag. I was pouring it over house plants at the new home, when all of a sudden, I stopped. What was coming out of the bag was astounding. I'd say something cliché like, "Never seen anything like it before," but seeing it wasn't really the thing; it was sensing it. Paul's soil felt alive. Sure, it contained earthworms, but there was also so much more. Potting soils I know are light and powdery: this was moist and heavy, fluffy yet dense. It was a rich chocolate brown color, with a fresh, earthy smell that jumped right out of the bag. The whole thing appeared to pulsate.

As I ran my fingers back and forth though the vibrant dirt I realized I couldn't waste it to grow houseplants, it had to grow food. And this was my moment of soil-enlightenment. The dirty little love affair I had with soil while writing (Cool Cuisine) climaxed in a burst of poetic verse:

I want to eat soil, not oil!

Suddenly, I could see all things, like the 2 billion protozoa, bacteria, and arthropods said to be found in a tablespoon of healthy soil. At last, I got it; I groked soil. These were those things; I was holding them in my hands?invisible yet indispensable, so easy to pass over, so key to our health, so......high-vibe.

I peered into the soil, feeling like Horton, in Horton Hears a Who. Even though I couldn't see them, I finally knew they were there, and I needed to do something to help.

- Cool Cuisine, Taking the Bite Out of Global Warming, Chapter 7

If you too are looking for more meaning these days, consider raising compost, at least until you convince your town to do it for you. Lucky if you live in Palo Alto though - July 1 starts their home compost recycling program.

"The week of June 16th, Palo Alto residents get cart tags announcing the program, followed by four public meetings to learn more," says Wendy Hediger, Zero Waste Coordinator for Palo Alto. "One quarter of the food Americans buy ends up in a landfill. Thirty-nine percent of Palo Alto's garbage is still compostable. Our goal is to rescue 3000 tons of food scrap waste per year."

GreenWaste will collect and transport the scraps out to San Jose's Zanker Road where they'll be processed at a 39-acre waste facility - the first large-scale commercial dry fermentation anaerobic digestor in the United States (the largest in the world). Out-gassing methane is first captured for reusable energy, then the remaining waste is turned into high quality compost.

If you are a DIY'er though, composting (or feeding food scraps to microbes which is really what we are doing) is not difficult. And it's super satisfying. When I first started raising microbes, I was scared I wouldn't do it right?but it's easy. Probably the hardest thing is remembering to remove those stupid produce stickers from the peels. The stickers don't biodegrade, and word up is they adversely affect the whole system. So do remove and throw them away, or better yet, invent a biodegradable sticky. 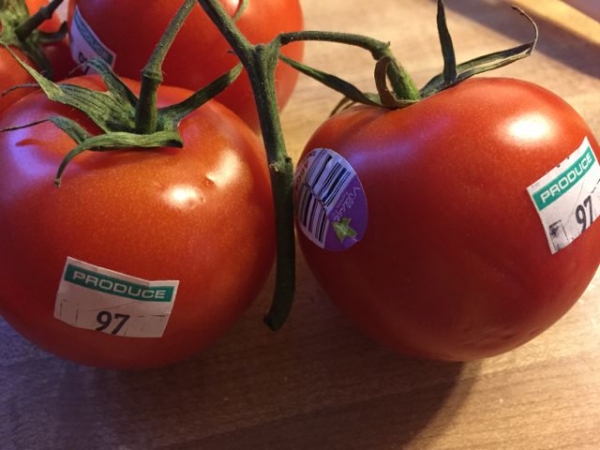 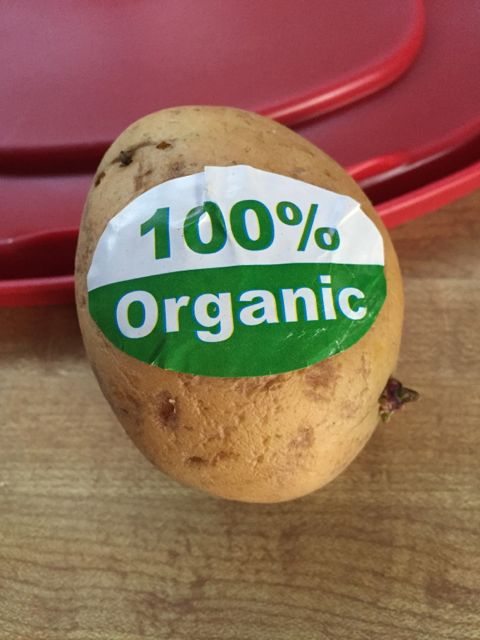 Once your bucket of food scraps is full, take it outside and serve up a delicious compost dinner to all the garden microbes, your own personal Whos down in Who-ville.

Then put your ear to the ground and listen.

Wait... what's that? It started in low, than it started to grow. 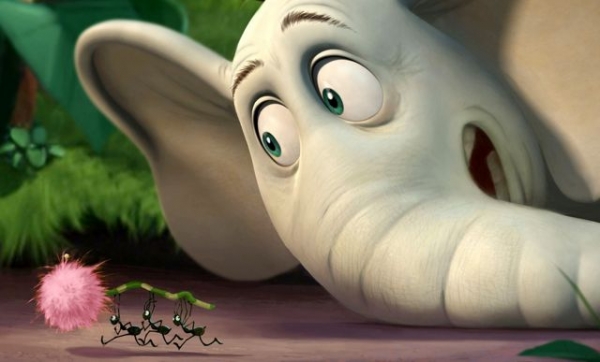 * only after the book was published did someone finally tell me what Paul was doing out there. Maybe you can guess?

He was either turning the compost which helps aerate it and maintain the process and/or he was checking the health of the compost pile by measuring the temperature of the center, which should be between 130-150 degrees Fahrenheit.

Or maybe he just likes playing with compost!

Report Objectionable Content
Posted by Steve, a resident of Shoreline West,
on Jun 11, 2015 at 7:31 am


Along with food scraps, you can also put paper towels, pizza boxes and any paper that is not shiny (coated) in your compost.

Report Objectionable Content
Posted by Steve, a resident of Shoreline West,
on Jun 11, 2015 at 7:33 am


"The stickers don't biodegrade, and word up is they adversely affect the whole system"

The stickers that say "organic" and "sustainably grown"? Oh, the irony.

Report Objectionable Content
Posted by Laura Stev, a resident of another community,
on Jun 11, 2015 at 8:42 am


I know Steve! That 100% sticker is the size of the potato. I couldn't believe it.

Report Objectionable Content
Posted by Retired Teacher, a resident of Duveneck/St. Francis,
on Jun 12, 2015 at 10:19 am


Great article, Laura! Food scraps are fertilizer on the hoof, so to speak. Not meat scraps and fat, though. Send them to SJ for transformation.

I have two compost bins behind the garage on my small lot--a cubic yard of compost each. Takes about six months if you don't turn the heap. There are a few tricks, though. Layer green and brown, put kitchen waste in the middle, keep it damp but not soggy. Seal the top with spent soil, water it, to keep the animal scavengers away.

If you have hard clay soil, as I do, another trick is to dig a hole a foot in diameter and 12-18 inches deep. Fill with compost, put a plant in--tomato, eggplant, squash, etc. Step out of the way before the plant hits you in the eye, it grows so fast. Saves water, too--you don't have to water an entire bed.

More great-tasting food than you can imagine!


My friends mom has a big mound of compost in her yard fenced off, it would fill almost my bathroom like waist high, anyway I want to destroy it but not let her know it's us. I heard if I dump milk into the pile it can mess it up. Any ideas would help, she is not that nice and cancelled a graduation party, now it's her turn! I've done googling but milk and mycotoxins is basically what I've got so far, maybe throw like 5 dozen eggs, 4 gallons of milk and some ground beef ($30.00, is our budget)...also how long will this take? We poured like 12 gallons of bleach on her lawn and flowers last month and forgot about it cause it took so long to show effects, then like 2 weeks later all the stuff was dead or dying, problem was by then we weren't mad anymore, she actually bought us season passes that day for knots berry farm.thanks for your help.

Report Objectionable Content
Posted by Laura Stec, a resident of another community,
on Jun 14, 2015 at 10:01 am


Jayson, not sure if you are trying to be a creative or a funny writer. My help is to let you know that both still need work.


im 17 lady. tour in no position to gove me advice on either, you wrote a blog that gets like 1000 views a week and think coffee is a date. lol. btw I was serious and just went with what I posted minus the meat.

Report Objectionable Content
Posted by Laura Stec, a resident of Portola Valley: Westridge,
on Jun 16, 2015 at 8:39 am


OK sthu - I think you are jayson? Everyone is welcome at The Food Party! Just be kind out there. We are all in this together.


Steve, thanks again for your suggestions. My mom just read the blog and said "I never knew you could compost pizza boxes"

Report Objectionable Content
Posted by CrescentParkAnon., a resident of Crescent Park,
on Jun 18, 2015 at 9:27 pm


>> The stickers don't biodegrade, and word up is they adversely affect the whole system.

I heard that these stickers do indeed biodegrade and that they are in fact edible even.
I suppose they have to be because if you do not get them off or all off them you are
ingesting some kind of toxic. It probably takes a while but if you do not like them
you should buy your produce at the farmer's market.

If you have different information about those stickers I'd like to know where it comes
from because I heard they were now regulated.


Report Objectionable Content
Posted by Laura Stec, a resident of Portola Valley,
on Jun 19, 2015 at 4:25 am


Interesting CrescentParkAnon. It was an article in the New York Times where I read it. When I get back to CA. I'll post a link.

Report Objectionable Content
Posted by Laura Stec, a resident of Portola Valley: Westridge,
on Jun 19, 2015 at 4:30 am

Doing more with the natural spaces we have
By Sherry Listgarten | 6 comments | 2,607 views

Can the Memphis police behavior ever happen here?
By Diana Diamond | 0 comments | 91 views