The new restaurant, formerly the home of Pineapple Grill, is massive, with three levels: an upper-level banquet room that can seat 175 people for private events; a mid-level dining room with an outdoor patio area; and a 60's Hollywood/Bollywood-themed lounge on the bottom floor dubbed the "Cellar." Each level has its own bar and kitchen.

The kitchen team from the Mountain View Amber India, headed by chef Salinder Singh (who has been with the restaurant for 20 years) and chef Sibji Bista (who has been with Amber for a decade), will continue to run things at the new location, Bist wrote in an email.

A new executive chef, Rupam Bhagat, has been brought in to serve as "cuisine director" for the banquet room, lounge and private dining. Bhagat comes with an associates degree in culinary arts from the Culinary Institute of America and cooking experience at several Ritz Carlton Hotel locations, including as close as Half Moon Bay and as far as Portugal, Bahrain and Naples.

The new restaurant's dining room menu will be the same as the longtime Mountain View location's, Bist said. 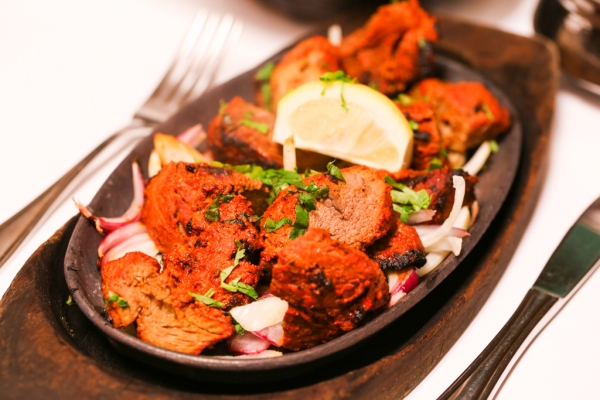 "We have focused on keeping the restaurant move as lateral as possible so the patrons continue to get and enjoy the same food and as much of the ambiance," he wrote in an email.

The kitchen team will debut new menu items in the "Cellar" like a spiced fried chicken with curry black-mustard honey and poutine with braised goat, goat cheese and fried chickpeas.

The lounge will also be open late and offer "something like the open mic, but for the tech music enthusiasts who would either come play with other fellow musicians or with their group of friends," Bist wrote. The lounge is decorated with sketches of Hollywood and Bollywood stars from the 1960s, several guitars and local art, Bist said.

A cocktail menu has been crafted with the help of Nick Melle, a consultant who has worked with well-known San Francisco watering holes Trick Dog and Smuggler's Cove. New Amber Club cocktails include the "Hotel California" with bonded bourbon, creme de cacao, lemon juice, ginger beer and tamarind; and the "Desperado," which combines a curry-infused honey, with tequila, Cocchi Americano and lemon.

This is the BEST Indian food in the Bay Area! My husband and I have been going to the Mt. View location for more than 16 years and the food is amazing, the service outstanding, and the new restaurant promises more of the same. We can't wait to get our reservations in!


Amber India had a great reputation when I moved here 15 years ago, but my experience was "meh". El Camino has DOZENS of better examples of Indian cuisine than Amber India starting in south mountain view down to Santa Clara. Their various restaurants get 3 or 3 1/2 stars in Yelp, which indicates "just ok". They are keeping the same chefs at the new location, so am not expecting much.


I agree with Indian food, I use to love Amber but have discovered much tastier alternatives further south down the El C. My daughter and I went on opening day for the lunch buffet, the food was eh, medium spiced for white people. We will continue to frequent the places further south.


So glad they are still here! Great food


This location also figures prominently in music history, when it was known as Chuck's Cellar: In 1971, Linda Ronstadt put together a backup band to play a gig here, the members Randy Meisner, Don Henley and Glenn Frey got along well enough to later form The Eagles. Web Link

Report Objectionable Content
+   2 people like this
Posted by Mike Keenly, a resident of Menlo Park: Allied Arts/Stanford Park,
on Oct 20, 2015 at 3:08 pm


Their old location had good street presence and was very accessible. The new location is hardly visible from the street. It may sound like a minor issue, but it can affect the success of a business.


+1 Meh, I totally hear you. I want to like it, just can't get excited over it. Most everything seems to have the same base flavors.

Stroll the streets of Paris on the Peninsula with Bon Marché
By The Peninsula Foodist | 7 comments | 10,201 views

Democracy and our police departments
By Diana Diamond | 15 comments | 4,386 views