I ask the bartender as J and I take seats at the bar of The Big Four. 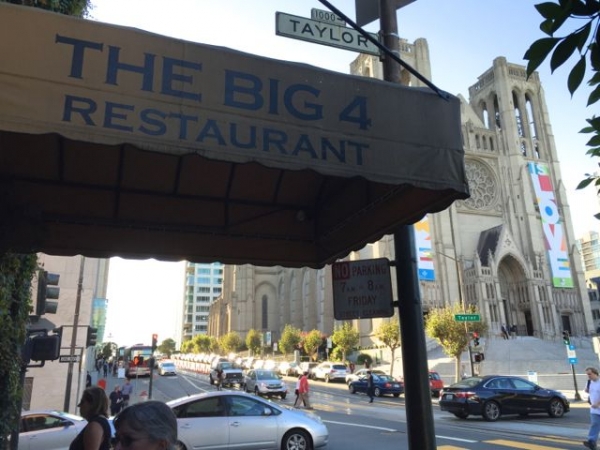 Straight off Big Four - Part One including happy hour out Weepers Corner at The Top of the Mark, we cozy up to a place where Leland Stanford and his three best buds might show up any minute for a shot of booze. Dark wood, crystal chandeliers, black leather, piano playing: it's only 5:30PM but the place is packed. The couple to our left are regulars from the neighborhood; the woman to our right catches a drink before Ringo Star plays the Masonic down the street. 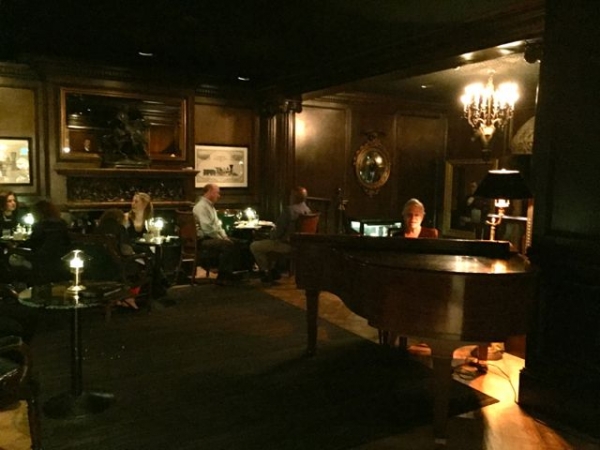 It's lively. It's exciting. It's old San Francisco.

"Haunted?" asks the bartender. I've heard some story about a bunch of pots being mysteriously thrown around once, but I don't know."

The menu is seasonal but with old-school style. Described as pleasantly familiar with a touch of contemporary sophistication, it's a nod to Nob Hill's storied past. We ordered the Tarragon Deviled Eggs ($12) and the Fried Squash Blossoms ($15). In an age of standing devils and huevos with Pickled Jalapeno with Bacon, I thought the eggs needed a facelift. And squash blossoms in September? "The last of the season" I'm told. Timely si or no, the batter was a surprisingly perfect and light accompaniment to the pedals, and the goat cheese stuffing was simple but yummy. 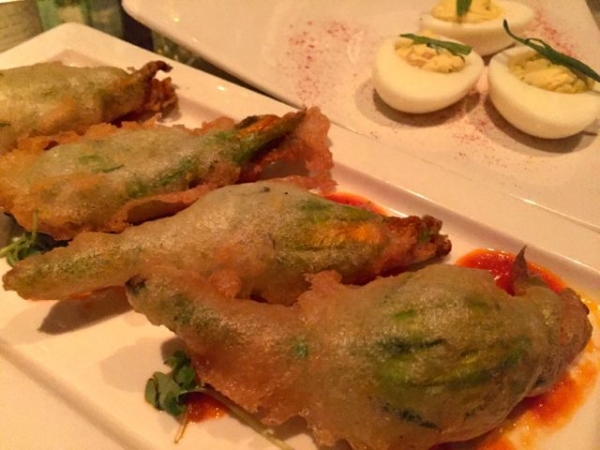 Opened in 1976, the Big Four kitchen ran under Chef Gloria for 37 years until Kevin Scott, New York fashion stylist turned chef, took over the stove a year and a half ago. "Some of our customers have been coming here for years. I honor the old menu with a touch of the new," he says. Scott is mentored by some of the City's greats' including my chef Hubert Keller (Fleur de Lys) and Traci des Jardins (Jardiniere, The Commissary & Arguello).

We order the Heirloom Tomato and Burrata appetizer ($16); simple again, yet delicious. Dry farmed tomatoes probably; the flavor so deep. Our server is Ron Henggeler, local historian and photographer, an impassioned man who has been collecting the barâ€™s leftover gallon maraschino and olive jars for the 20 years heâ€™s worked there (and 20 years prior to that). He fills them with San Franciscoâ€™s colorful history; ceramic chards, glass, and bottles from the Spanish and Gold Rush days, pieces of leather shoes, silverware, bones, 1906 earthquake relics, marble and tile from the original City Hall destroyed in 1906. With a thousand jars filled, the list is long. Giving each a whimsical headdress made from artifacts, he calls them Kachinas because they are spirits and familiars holding stories and memories of times past.

Ron serves the Classic Chicken Pot Pie, paired with a glass of Napoleon Amontillado Sherry ($37) and Steak Tartare, Quail Egg & Pain de Mie ($16). I am in love. I've become quite the potpie maker myself, but this crust competes. A creamy comforting balance of autumn fills my stomach and brings me home. The sherry poured over the pie is a new experience and one I look forward to having again. It made it just so right. 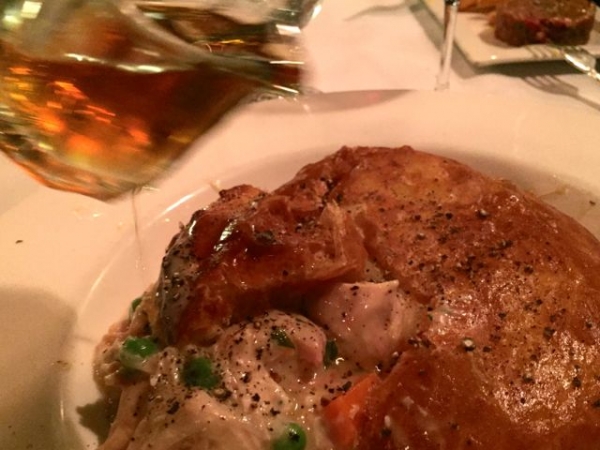 J says the salt is a touch heavy on her tartare, but the quality of the beef shines through, no matter. The accompanying toast points are classic, but here is another area where a small updo could work. Keep the essence; improve the vehicle. There is so much great bread in San Francisco.

Upon leaving, Ron escorts us to a back room lined with a photo montage he personally assembled. He fills our bellies and minds with even more history and spirit of the late 1800's and early 1900's. 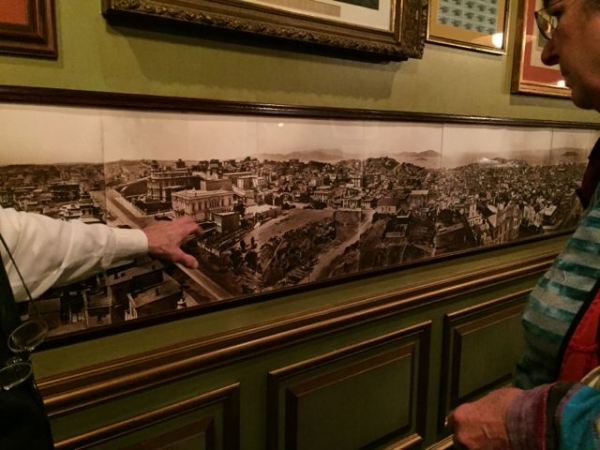 In a city filled with hot and trendy, walking into The Big Four means a meal with an old friend. The atmosphere and food blend so well with the service, which was impeccable. Dinner and drinks here were the perfect finale to our Nob Hill daycation. I encourage everyone to go out and tour your town. Learn her history. Experiencing the past adds rich tapestry to the present.

Then, I don't really know what became of me. Was it the dirty martini, the Amontillado, or the environment that swept up the moment in emotion? I reach for Ron's hand and kiss him on the lips.

"Thank you, thank you Ron. And oh - you are the one who would know. C. P. Huntington, Charles Crocker, Mark Hopkins and Leland Stanford... are they...still here? These men who started behind the 5 & 10 counters of Sacramento to become San Francisco's top movers and shakers - they all lived nearby. Surely they must have stuck around. Ron, is the hotel haunted?"

He stops. And thinks. And smiles.

Oh well... I bet those guys moved up to a new hill, now even closer than half way to the stars.

Far above the blue and windy sea.

My love, is that where you wait? 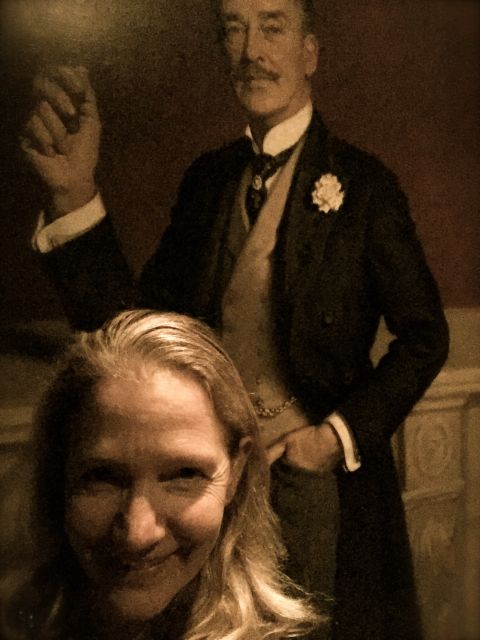 If you would like to learn more about Laura's server at the Big Four (also my favorite!), and his love of San Francisco, and it's history, and especially of the Big Four - Hopkins, Huntington, Stanford and Crocker - visit Ron's photography
homepage at


Here's a bit more from Ron about the back room photo montage and general history: " I am the one who mounted on the wall of the CPRR Banquet Room, the panoramic view of San Francisco taken by Eadweard Muybridge in 1878.

In the history of photography, Eadweard Muybridge is considered the Father of Cinema. Around the time that Muybridge captured the panoramic view of San Francisco from the tower of Mark Hopkinâ€™s mansion, he got together with Leland Stanford (next door neighbor to Hopkins). The two of them went down to Stanfordâ€™s farm in Palo Alto (site of todayâ€™s university) and using a series of cameras, proved that when a horse is galloping, all four hooves leave the ground together. Hence, the beginning of motion pictures. Thatâ€™s the story in a nut shell . . . "

Doing more with the natural spaces we have
By Sherry Listgarten | 9 comments | 3,048 views

Can the Memphis police behavior ever happen here?
By Diana Diamond | 14 comments | 1,099 views