The bakery announced the impending expansion on Instagram over the weekend, posting a photo of the space at 271 State St. with the caption, "Dear Los Altos, hope you're as excited as we are #comingsoon." 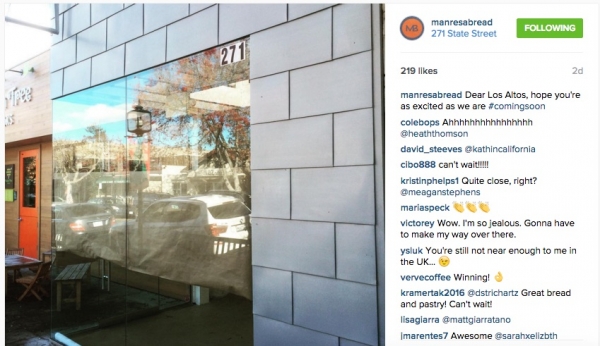 Andrew Burnham, partner at Manresa Bread, said Monday that they've long been eyeing Los Altos as one piece in a larger expansion puzzle. (He said they even looked at the same 271 State St. space several years ago with plans to open a bar, but that fell through.) They took notice of a changing downtown landscape, with Google co-founder Sergrey Brin buying up real estate and new developments being built (as well as new restaurants moving in).

"A couple years ago, we started seeing a lot of activity," Burnham said. "It's not New York City; it's not the most vibrant nightlife scene at the moment, still, but things, I think, have been changing a little bit and hopefully we’ll play a role in that."

Plus, with a 3,600-square-foot commissary that is capable of producing much more than the current bakery and restaurant demand, "it’s always been in our plans to branch out," Burnham said, and "the Peninsula was always kind of front and center, top of the fold in terms of where we were going to look."

Burnham said the Los Altos Manresa Bread will be similar to the existing Los Gatos bakery, which opened in February, not far from its Michelin-starred parent restaurant. But Los Altos will have full espresso and coffee service with Verve Coffee, something the Los Gatos bakery doesn’t yet have. There will also be cold-brew coffee flowing from a nitrogen tap, kefir on tap and all of the famed breads and baked goods. “Weekly staples” include levain bread, brioche, sourdough baguettes, croissants, kougin amanns and more, plus seasonal goods like pumpernickel buckwheat rye, fruit-and-nut loaves, polenta cakes, quiches and tartines.

After opening, they hope to start making macarons and chocolate, which hasn’t yet been done in Los Gatos, Burnham said.

Los Altos will "basically be a better reflection of what we want the experience to be like from the very beginning," Burnham said.

It also won’t be the last new Manresa Bread location. Other Peninsula cities are "on the hit list," Burnham said. Is there a goal for how many more they want to open? Yes, but "it’s sort of one that I keep to myself," he said.

Burnham described the Los Altos bakery as a "continuation" of Manresa’s efforts to bring vibrancy — and excellent baked goods — to "quaint-ish walking-distance-only kind of downtown areas," like Los Gatos, Los Altos and other Peninsula cities.

"We want to have these small, quaint neighborhood bakery spots," he said. "I think this is just exactly that and hopefully we’ll do some more."

Burnham also stayed mum on a targeted opening date, but he said they're aiming for sometime in the first quarter of 2016.

Manresa, which opened in 2002, has earned accolades from three Michelin stars to Bon Appetit's 2013 list of the "20 Most Important Restaurants in America." Chef-owner Kinch was nominated for the James Beard Foundation’s "Outstanding Chef" award in 2014 and received the Foundation’s "Best Chef: Pacific" award in 2010.

Kinch launched Manresa Bread in early 2013, starting by serving breads and pastries at pop-ups and farmers markets, including at Palo Alto’s California Avenue market on Sundays. Manresa Bread was driven by and is now overseen by Avery Ruzicka, the restaurant’s head baker.

Kinch and Burnham also announced in July that they plan to open a New Orleans-style restaurant this fall in Los Gatos, just a few blocks from Manresa.

I'm thrilled this is happening, however they will have to compete with Mayfield Bakery in Palo Alto and Alexander's in Mountain view. I love the Los Gatos location for it's baked goods, but it does feel not very professional. I hope they step it up and make it a destination worth going to in Los Altos. Manresa the restaurant is amazing, and I have and use the cookbook, but I'm really hoping the bakery in Los Altos lives up to the name. Can't wait to find out...

Report Objectionable Content
Posted by Los Altos Resident, a resident of another community,
on Dec 15, 2015 at 1:53 pm


"It's not New York City" is, in fact, our unofficial town slogan.

Report Objectionable Content
Posted by Carla, a resident of Downtown North,
on Dec 15, 2015 at 10:58 pm
Carla is a registered user.


Heck, it's not even Palo Alto City.

Report Objectionable Content
Posted by Kelly, a resident of Los Altos Hills,
on Apr 2, 2016 at 6:25 am


So Excited! Would love to join their team.

Doing more with the natural spaces we have
By Sherry Listgarten | 6 comments | 2,606 views

Can the Memphis police behavior ever happen here?
By Diana Diamond | 0 comments | 84 views