A deadline looms on the fate of public access to Martin’s Beach. 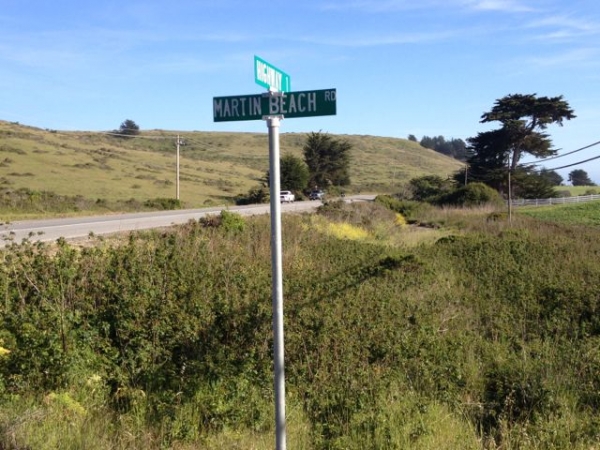 For those of you unfamiliar with the issue, Martin’s Beach, heaven on earth just south of Half Moon Bay, was closed to cars in 2008 after Sun Microsystems co-founder and modern day Darth Vader Vinod Khosla bought it, ignoring a 1972 California Coastal Zone Conservation Initiative making coastal lands public property. In response, the Surfrider Foundation sued Khosla for violating the California Coastal Act, and it’s been in the courts since then.

The Food Party! field-triped out there last year. First time for moi. It was quite an adventure. Anyone remember Tanned and Tatted? 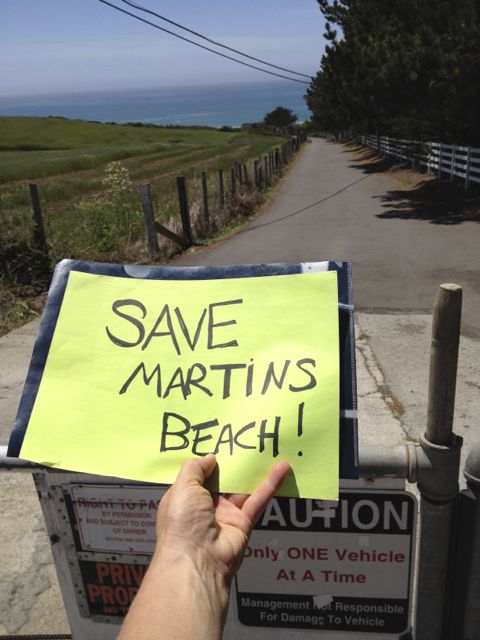 Also in 2014, we have Senator Jerry Hill to thank for bringing California Senate Bill 968 into law, requiring the California State Lands Commission to enter into negotiations with Khosla and reach an agreement to create a public access road to the beach.

And here’s the urgency. If no agreement is reached by January 1, 2016, the commission may acquire a right-of-way or easement by eminent domain.

So now’s the time to give a shout out to the State Lands Commissioners and let them know you care about maintaining public access to the site because, well, it is one of the best places around to have a Food Party!, or just enjoy the view.

If you haven’t picnicked on Martin’s Beach, take your leftover turkey and do it over the holiday. Though I never actually made it in Trespass Picnic on Martin’s Beach - part one, I have returned since then. The gate was closed, but we just walked over it and down the road. The county has decided not to bring trespassing charges for crossing Khosla’s property to get to the beach that belongs to us all.

So here's to a swell holiday. May you boogie long and prosper in 2016. 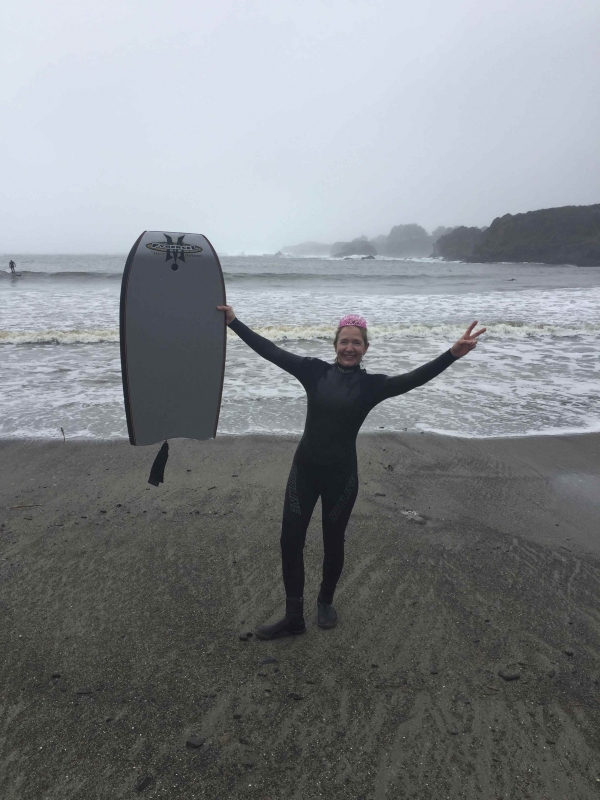 Yeah Laura! Thanks for keeping this issue alive.
Enjoyed meeting you last week at the PVFM and commiserating. Martin's is precious and belongs to us all.

Report Objectionable Content
Posted by Gary, a resident of another community,
on Dec 21, 2015 at 4:20 pm


What's that pink think on your head?


I'd just note that the two cases mentioned by Gary have both been tried and ruled on by judges. However, they're both being appealed. The first was the Buchwald ruling which mostly dealt with the California Constitution's requirement for access to navigable waterways, and was ruled in favor of Khosla with "quiet title" to the the road and (to my interpretation) the entire sandy beach. The second was the Mallach ruling, which was mostly about the closing of the road and hiring of security guards being "development" that was done without an application for a coastal development permit. That ruling states that Khosla was to stop preventing the public from accessing the road and beach, although it left room for the possibility that a permit could be granted for those actions. I personally don't think that the Coastal Commission would approve such permits, but the ruling states that it's speculative to insist they won't.

And as was noted, the county (really the San Mateo County Sheriff's Office) won't cite or arrest for trespassing with regards to accessing the road or beach. As far as they're concerned, public access is still under dispute and they're staying out of it.

There are other issues that complicate the attempts to get public access for Martins Beach. There's the Coastal Commission and their prescriptive use study. Then there's SB968 which kicks into its eminent domain phase this Jan 1. It would be really odd if an easement was purchased by eminent domain. I wonder what would happen to the cases. Also - the cost of the easement would really depend on whether or not it's determined that Khosla actually owns the road or beach, since that seems to be in question due to the Buchwald ruling.


Nice catch ??? I am a fan of boogie board birthdays, and this year I decided to wear my "birthday girl" crown in celebration.

y_p_w - thanks for the info. I don't know about Buchwald, but am pretty certain it doesn't suggest Khosla might own the beach. That bird has already flown.


You can read the ruling. It's filled with a lot of legalese and references to previous cases. However, the way I read it, he cited the terms of the federal land patent as not allowing for public encumbrances of any kind. In particular, it stated that "tideland-based public access [by water]" wasn't granted, which was the second cause of action from the Plaintiff (Friends of Martins Beach). His ruling did note that eminent domain or an easement as a condition of a coastal development permit could be an option to extract public access.

1. California state law does not control because a series of United States Supreme Court cases are preemptive in holding that no public right of access exists because Defendants” federal patent rights are controlling.

2. Any countervailing public rights under Article 10, Section 4 of the California Constitution do not and cannot override the federal land patent title in the Defendants because, as a matter of federal law, the patent acted as a quitclaim deed that ended any preexisting public access rights.

3. For the Court to rule otherwise would confer to the public a right of public access without any eminent domain proceeding and without any just compensation which is required as a matter of both federal and state constitutional law, and would constitute an unlawful taking of the Defendants’ federal land patentownership rights.
**unquote**

This was the part about speculative assertions that a CDP wouldn't be granted:

**quote**
Defendants contend they were told by the California Coastal Commission that they would never receive a permit of any kind due to their decision to terminate decades of public access to the water and coast at Martins Beach. Defendants admitted that there is no written support for this contention (Tr. 777:9-26), and Mr. Baugher testified that unless and until the LLCs apply for a permit, nobody knows how the Commission would rule on such an application.

Not only have Defendants admitted that nobody can know how the administrative process would play out, but that is the only logical conclusion this Court can draw – nobody knows what would happen if Defendants had applied for a permit, because no permit application was ever made.
**unquote**

And this is the summary of her decision. It clearly runs counter to Judge Buchwald's ruling, which is probably why the Sheriff came to the conclusion that the public access is still in doubt:

**quote**
1. Defendants are hereby ordered to cease preventing the public from accessing and using the water, beach and coast at Martins Beach until resolution of Defendants’ Coastal Development Permit application has been reached by San Mateo County and/or the Coastal Commission.

3. Defendants’ conduct in changing the public’s access to and use of the water, beach and coast at Martins Beach, specifically by permanently closing and locking a gate to the public across Martins Beach Road, adding signs to the gate, changing the messages on the billboard on the property and hiring security guards to deter the public from crossing or using the property to access the water, beach and coast at Martins Beach without a Coastal Development Permit(s) constitutes a violation of the California Coastal Act.
**unquote**

However, the final judgement kind of threw a wrench into this decision since it mentioned "to the same extent" with regard to the opening of the gate.

**quote**
B. Second Cause of Action for Injunctive Relief
1. Judgement is entered in favor of the Plaintiff.
2. Defendants are hereby ordered to cease preventing the public from using the water, beach and coast at Martins Beach until resolution of Defendants’ Coastal Development Permit application has been reached by San Mateo County and/or the Coastal Commission. The gate across Martins Beach Road must be unlocked and open to the same extent that it was unlocked and open at the time Defendants purchased the property.
**unquote**

Report Objectionable Content
Posted by A reader, a resident of another community,
on Dec 26, 2015 at 6:01 am

As the January 1, 2016 deadline identified by Sen. Jerry Hill's SB 968 approaches, you have the opportunity to determine if the best way to keep public access to Martin's Beach in San Mateo County is via a purchase using eminent domain -- or allowing the court cases that are in process to run their course.

We the citizens of California voted many years ago to retain public access to the beaches of California, as part of our state's natural heritage which all citizens are entitled to enjoy. I have a concern that using eminent domain to purchase such access, which is already ours by law, would set a precedent of paying property owners to provide such access -- but such access is not theirs to sell: it belongs to the people already.

Please consider your decision carefully in light of the precedent that it may set. While it's clear that Martin's Beach should be opened to the public, please don't do so in a manner that will put a price tag on access when other property owners near our beaches decide to follow Mr. Khosla's illegal actions.

Thank you for considering this perspective.


I'm not sure if using eminent domain to purchase this land is going to necessarily set a precedent. This land is somewhat unusual, and that's why Judge Buchwald came to his conclusions.

Most coastal land will still be subject to the terms of the California Constitution''s public access terms, as well as the Coastal Act. It's not as if every land owner on the coast is going to be able to try the same tactics used for Martins Beach.

This is not a typical case. Also - the cases might still work their way through, and settle the terms for land with similar histories. I've heard of attorneys who believe that the Buchwald ruling stands a good chance of being overturned.

How we eat away at our open space, even in Palo Alto
By Sherry Listgarten | 5 comments | 7,410 views

Three new restaurants from former Manresa chef David Kinch and his team are coming to Los Gatos
By The Peninsula Foodist | 2 comments | 4,546 views