Uploaded: Jan 18, 2016
Main Street Cafe, a community fixture in downtown Los Altos for the last decade, will be closing at the end of the month.

Owner Jamie Tomaselli confirmed the closure last week but would not comment further, and did not return additional requests for comment.

Paul Nyberg, owner of the building at 134 Main St. with his wife Liz, said that he decided to not renew Tomaselli's 10-year lease, which expires on Jan. 31. Paul is also the publisher of local newspaper the Los Altos Town Crier. The Nybergs bought the Town Crier in 1993 and, two years later, the building it occupies.

Nyberg said that Main Street Cafe wasn’t "very profitable" and another, "better" option for a restaurant tenant in that space has presented itself. He would not identify the restaurant.

In the wake of the news of the cafe's closure, a community group wrote a petition urging the Nybergs to keep the cafe under its current ownership, according to an article in the Town Crier.

"It would just not be the same, especially given the 'new age,' nontraditional establishments that seem to be replacing those with the traditional 'village’ feel,'" reads the letter, signed by 28 area residents who meet on Saturdays to discuss cars, according to the Town Crier. 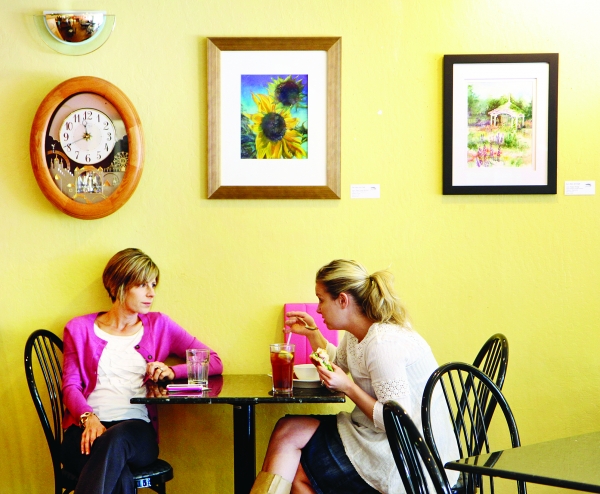 Customers have lunch at Main Street Cafe in Los Altos in 2012. The walls are covered with local art work that rotates each month. Photo by Michelle Le.

A 2012 Mountain View Voice feature on Main Street Cafe compared dining there to “dropping in at a neighbor's house, more about the friendliness than the food.” The cafe displayed and sold local art, stocked a small collection of books for sale and hosted community events like the Los Altos Police Department’s first-ever “Coffee with a Cop” event.

I love this place and the food is fresh and good. The problem is that you could go there and order nothing and stay all day. Many small groups met there and no one ordered food, not even a coffee. You cannot run a restaurant that way and expect it to last long. It does show a need, however, for a general meeting place - basically the old front-porch meeting places in days too long ago. Sadly, we can't turn the clock back. I wish Jamie all the best. This is likely one of the last welcoming places Los Altos folks can hang out, chat, knit, discuss books, etc.

Report Objectionable Content
Posted by charles reilly, a resident of another community,
on Jan 18, 2016 at 5:58 pm


Towns on the Peninsula seem to churn through lots of small-time restaurants every month. Broadway street in Redwood City has many, many restaurant locations that have never had success. If I were a landlord (which I usually am) I'd rather have one good, steady tenant than a series of short-terms ones. For some reason, after two or three failures, the location often becomes "jinxed" and people don't want to go there anymore.

Report Objectionable Content
Posted by Max Hauser, a resident of Old Mountain View,
on Jan 18, 2016 at 7:15 pm
Max Hauser is a registered user.


FYI, this subject (and its public reaction) also had a run somewhat earlier in the PA Daily Post, where I learned about it (starting January 8 with Jen Nowell's "Beloved cafe to close," which I think broke the story, well before the January-13 Town Crier article linked above). The Post isn't online (except behind a paywall as "archives"), but is distributed widely in print.

Report Objectionable Content
Posted by Jennifer Kretschmer, a resident of another community,
on Jan 19, 2016 at 8:15 am


So sad to see this place go. It's been a place where I've exhibited my artwork and met with other artists. The food and beverages were always delicious. The owners have always been so generous to the art community to share their walls.

Report Objectionable Content
Posted by Interesting, a resident of another community,
on Jan 19, 2016 at 3:54 pm


Here I thought that the Cafe was the break room for the Los Altos Town Crier!

Report Objectionable Content
Posted by Long-time resident, a resident of Los Altos,
on Jan 20, 2016 at 1:13 pm


This is so very sad. A welcoming place where you can sit at the bar for lunch and chat with any locals there or read. Jamie is unfailingly welcoming and kind. The food is delicious and served with a smile. The local car club brings its beautiful, Concours-ready, cars there very Saturday to chat and gather. Book clubs, realtors, and artists gather there. The trendy restaurants that have moved into our neighborhood offer none of this wonderful feel which, I have read, is one of the keys to happiness (6 encounters a day=happiness and a feeling of well-being). Also, the Town Crier did not publish this article promptly as the publishers are the owners of the building which houses The Main Street Cafe.

Report Objectionable Content
Posted by Connie, a resident of Atherton: Lloyden Park,
on Jan 25, 2016 at 12:18 pm


I wish I could to hire Jamie as my personal chef, what a giving and caring person! Unfortunately it all comes down to money in this world. Sad to see them go.

Report Objectionable Content
Posted by Max Hauser, a resident of Old Mountain View,
on Jan 25, 2016 at 3:25 pm
Max Hauser is a registered user.


I visited Main Street Cafe recently for the first time, had a light meal and coffee, talked to Jamie Tomaselli (who was indeed very welcoming) and one or two local regulars. I guess I've walked past many times when in downtown Los Altos and not known such a place was there.

Even by neighborhood coffee-house standards, Main St. Cafe seemed very deliberately organized as a community center. Not just the section with books, the artwork, the many people chatting at small tables in front (who, I suspect, had been there before), or the long counter; the large space even has a supplemental area of tables at the rear or State-Street end, labeled "Chat Room."

If the owner succeeds in opening elsewhere, I'm sure it will be popular and I hope someone posts an update here.

This barbecue business was kicked out of Belmont. Now it's a Sunday fixture in Redwood City.
By The Peninsula Foodist | 2 comments | 4,355 views

Can the Memphis police behavior ever happen here?
By Diana Diamond | 20 comments | 1,306 views