The restaurant is hosting a media dinner and soft openings this weekend before opening its doors to the public at 191 Castro St. at 11 a.m. on Monday. 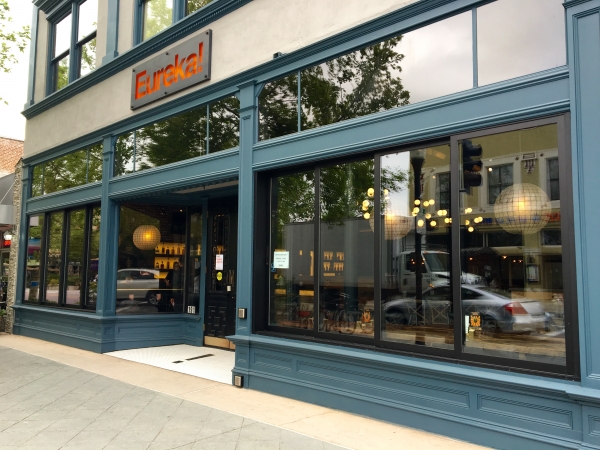 Eureka! is opening at the corner of Castro and Villa streets in downtown Mountain View. Photo by Elena Kadvany.

The first Eureka! opened several years ago in Redlands, and there are now more than a dozen locations throughout southern and northern California, including in Berkeley and a brand-new outpost in Cupertino. The restaurants serve burgers with hand-packed patties made from 100-percent vegetarian-fed, hormone and antibiotic-free, all-natural beef, according to the company's website. Buns are baked fresh and fries are hand cut. Produce is sourced locally when possible. 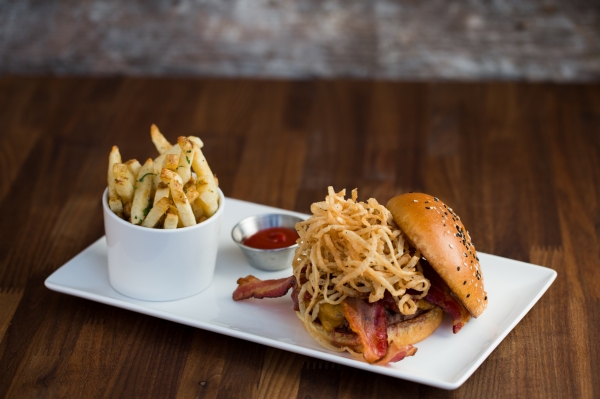 Beyond the burgers, there are starters like bruschetta, Brussel sprouts, mac and cheese, wings, nachos and shishito peppers plus salads, sandwiches and other entrees. View the full menu here.

Drinks-wise, Eureka! is focused on craft beer and small-batch whiskey, and draws on the local market to develop each outpost’s booze offerings, according to Alexia Penna, Eureka's public relations and marketing manager. Each restaurant serves 40 American craft beers on tap and more than 50 whiskeys.

Signature cocktails include the "Holy Smokes!," a Buffalo Trace bourbon cocktail infused with hickory smoke made with maple syrup, cherry liqueur and aztec chocolate bitters; and "Some Like it Hot," with Ascendent American Star vodka, cucumber, lime and firewater tincture (whatever that is).

There will also be regular live music every Thursday, half-off wine every Tuesday and a ”Steal the Glass" every Wednesday (local breweries provide glassware that participating imbibers can take home with them).

The restaurant group has remodeled the 110-year-old building at the corner of Castro and Villa streets with a "steampunk theme" featuring classic red brick walls, hex-tile floors, tufted booths and reclaimed wood throughout the entire space, according to a Eureka! press release. 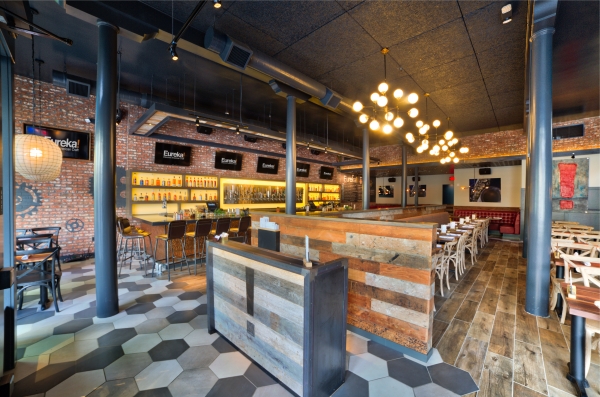 
Wow ! a restaurant that's not selling fusion food or milk tea ! Let's hear it for diversity ...


Actually, Charles, currently downtown MV has only two or three restaurants (counting the just-opened Izzo) with clearly "fusion" menu concepts (most that tried it in recent years failed, or in Gochi's case, moved away for other reasons). Not counting loose usage of the term sometimes (like the current "Best-Of" poll, to include restaurants that don't normally describe themselves that way, but might still accept a Best-in-Category award if it came their way). However, with Eureka there will be FIVE nearby bar-and-grill places with fancy burger menus (would have been six, if Buffalo hadn't closed). So far, I see no one fretting or griping over perceived excess burger bars.

On Elena's other recent blog re Buffalo becoming another Srasa Kitchen, a reader commented "it looks like we will have two Asian box style restaraunts and soon two Poke box style restaraunts. We need Indian!" That's a strange numerical logic. Five Indian (plus one Indian-Pakistani) restaurants are on, or within short walk of, Castro Street already (more, if you go farther afield). So if anything, it's the Poke and Build-a-Meal restaurants that are underrepresented.

In reality, with over 100 restaurants in walking distance of each other in the neighborhood, the diversity is enormous and more inclusive than many folks realize. Gripes about wanting more of one kind, or fewer of another kind, of restaurant there often just reflect unfamiliarity or misimpression of what'a really there.

Report Objectionable Content
Posted by GastroSt, a resident of Mountain View,
on Apr 20, 2016 at 10:13 pm


I think it is against common sense that an entire street is turning into a row of restaurants. It is in fact a shame. Other kind of businesses can't make money given the overrated rents etc. You get a second, third, or tenth burger place, or Indian restaurant, it is no good! We need vibrant neighborhoods, walkability, not many more restaurants. But this is what's happening on Univ. Ave, Cal Ave, and on Castro St. Castro had been able to keep a wide spectrum of shops, but the future doesn't seem to be too different from others. I just hope they don't change it to Gastro St. in near future.

Report Objectionable Content
Posted by scotty, a resident of Community Center,
on Apr 21, 2016 at 9:01 am

Report Objectionable Content
Posted by retrosynth, a resident of Blossom Valley,
on Apr 21, 2016 at 5:33 pm


I know Kapp's (and probably the 191 Restaurant and Bar) had issues with the bathrooms downstairs backing up. Whether it's fixed or not for the new place is a mistry.

Report Objectionable Content
Posted by chris, a resident of University South,
on Apr 23, 2016 at 1:06 pm

The internet and big box stores are causing retail to shrink.
Don't blame it on restaurants. The restaurants are showing up because that is where people spend their money.

Report Objectionable Content
Posted by TonyS, a resident of Shoreline West,
on Apr 25, 2016 at 8:48 am


@retrosynth - The bathrooms are brand-new and not downstairs anymore. The entire restaurant is a single floor (ADA) and extremely nice inside. I was lucky enough to be invited to the soft openings this weekend and the food is amazing, if you like bourbon they have the best collection of Pappy Van Winkle and George T Stagg on the West Coast. My favorite part: Happy Hour EVERY DAY from 2pm to 6pm, no longer do you walk downtown at 2 and not have a place to go eat. Beers are amazing. We are lucky to have them here in MV!

Three new restaurants from former Manresa chef David Kinch and his team are coming to Los Gatos
By The Peninsula Foodist | 2 comments | 4,648 views