Uploaded: Jun 8, 2016
Just as one fast-casual poké eatery opened in Palo Alto, another announced its impending arrival: Poki Bowl, which put up a temporary sign in the window of 2305 El Camino Real. 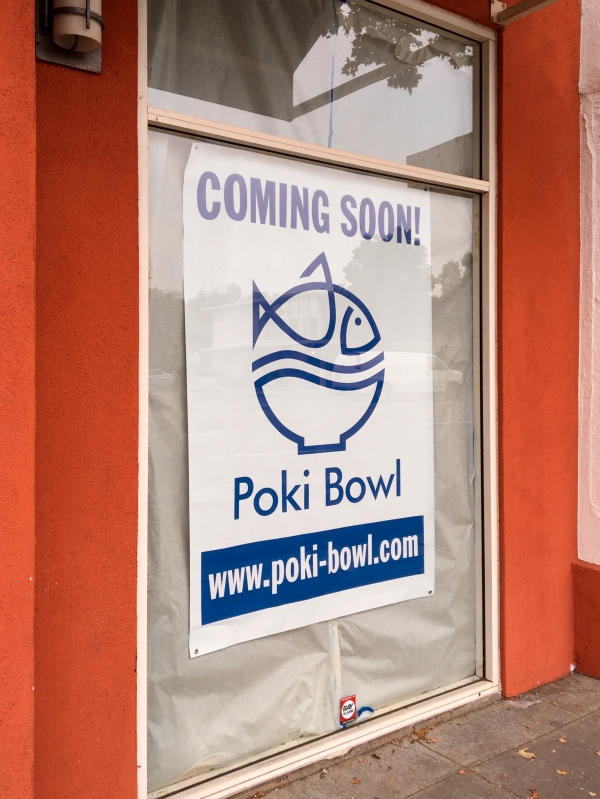 Poki Bowl also posted a photo of the sign with the caption "We see you Palo Alto!" on the company Instagram.

"We can't wait to open our door to all the customers requesting us to expand to the area," he wrote.

Poki Bowl, which operates two locations in San Jose, has taken over a space in Palo Alto that has been vacant for more than a year since the Cheese Steak Shop closed.

There, like the many other poké places sprouting up throughout the Bay Area in recent months, customers can customize a bowl based on the Hawaiian staple of diced and marinated seafood. Choose from a base of rice, chips, mixed greens (or half and half), then add your choice of poké, sauces and toppings.

Nguyen said if all goes well, he hopes to be open in a month or less.

When it opens, Poki Bowl will join the newly opened pokéLOVE at Town & Country Village in Palo Alto and Poke Bar inside Ava’s Market and Deli on Castro Street in downtown Mountain View.

Another eatery called Pokéworks was slated to come to 211 Castro St. in late 2015, but has yet to open. The last word from partner Kasper Hsu was that he aimed to be open in the beginning of June.

That's the same address as Pieology. Will Poke Bowl replace Pieology, or will it replace what was previously the Philly Cheesesteak shop?


location?: This is the space next door to Pieology. They do share the same address. Poki Bowl is replacing what used to be the Cheese Steak Shop.

Report Objectionable Content
Posted by resident, a resident of Midtown,
on Jun 10, 2016 at 9:21 am


I've been to the Poki Bowl in south San Jose. Fish quality is about the same as the PokeLove place in Town & Country shopping center, but Poki Bowl gives you more fish and less veggie filler for your money. Not sure if their portions and prices will be the same in Palo Alto, of course. I am glad to see some competition in town though. PokeLove seems busy enough that there should be enough customers for both places.

Report Objectionable Content
Posted by Billy Anderson, a resident of Evergreen Park,
on Jun 11, 2016 at 5:56 am


Its really good to hear that Poki Bowl is going to open in palo alto. I've been to the Poki Bowl so many times. These guys are really great . Nick Nguyen is always ready to serve best things in terms of quality and all . I wish them good luck to success.

Report Objectionable Content
Posted by umam, a resident of Greenmeadow,
on Sep 23, 2016 at 7:37 pm

How Much Time do You Spend Outdoors?
By Chandrama Anderson | 0 comments | 1,370 views