Uploaded: Sep 28, 2016
It's that time of year: Oktoberfest season is upon us. Mountain View's very own version of the traditional German festival will be returning this weekend, with two full days of brews, food and entertainment.

The annual event, which Steins Beer Garden first launched in 2013 in partnership with Mountain View brewery Tied House and the Mountain View Chamber of Commerce, will feature eight different beers — five authentic styles from German beer houses and three special brews from local breweries, according to Steins owner Ted Kim. Tied House will also be pouring its Oktoberfest Lager, along with a variety of German brews. 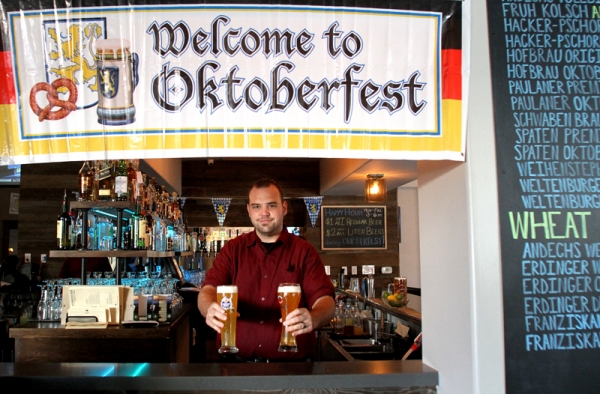 Cody Van Houten, a bartender at Steins Beer Garden in Mountain View, pours a Weihenstephaner Vitus Weizenbock, left, and Weihenstephaner Weissbier, right, a few of the many German beers on tap for Oktoberfest in 2013. Photo by Veronica Weber.

Drink tickets are $8 for one ticket or $30 for four tickets. (One ticket fills a o.5-liter stein.)

There will also be traditional German food, live music, a pretzel-eating contest and kid-friendly activities.

The festivities will take place from 11 a.m. to 7 p.m. on Saturday and Sunday in the parking lot behind Steins at Bryant and Dana streets in downtown Mountain View. The event organizers expect close to 7,000 people to attend throughout the weekend.

For more information, go to mvoktoberfest.com.