City Supper – The Future of Food

In prep for Bringing Urban Cuisine into Colleges and Universities, a talk I’m giving next year for NACUFS (National Association of College and University Food Services), The Food Party! has embarked on a 10-month research project to define “urban cuisine,” and share how it's happening around the country.

We’ve all been eating local lately, but how might that differ from eating urban? One main way is farmers tasked with growing food without much, or any, land. A recent road trip to Chicago offered a look at folks rising to this challenge.

Urban Cuisine Tour Stop #1
Uncommon Ground
Our tour starts at this Chicago restaurant still harvesting kale, carrots, herbs, lettuce and other produce from raised beds on their downtown rooftop. When I arrived last week, they just picked 400 pounds of produce. Not bad for an eastern town in October. 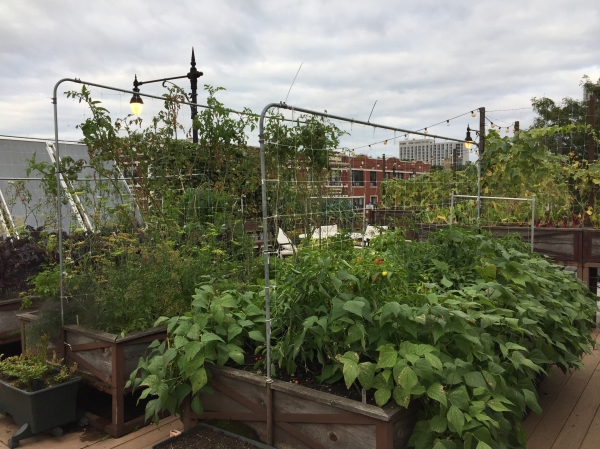 Urban Cuisine Tour Stop #2
Gotham Greens
Next a visit to Gotham Greens, the largest indoor greenhouse (LEED certified) in the U.S, growing hydroponically in water with added fertilizer, on top of the Method Soap building. Their football field-size greenhouse produces annually 100 acres of greens such as basil, Chicago Crisp and green oak leaf, which is handpicked, non GMO, and pesticide free. 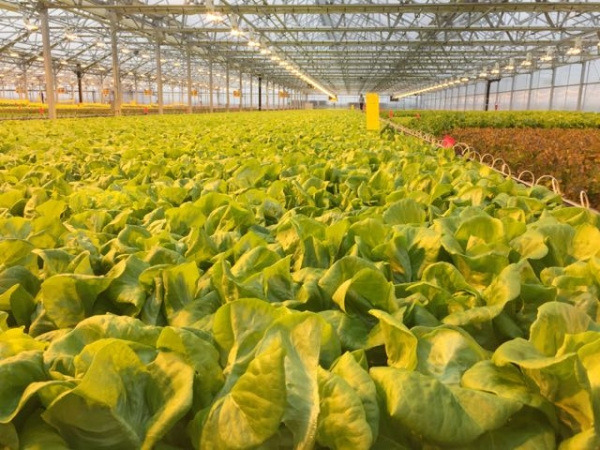 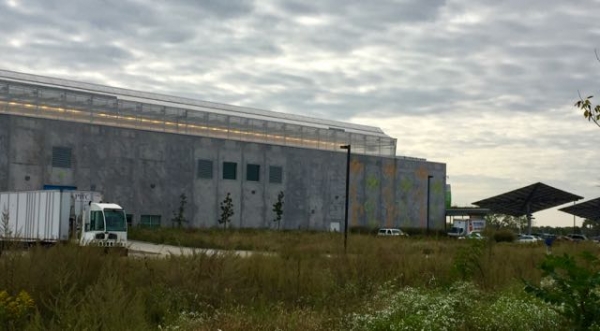 Urban Cuisine Tour Stop #3
The Plant
The Plant turned an ol’ meat processing plant into sixteen different, independent food businesses that operate mimicking natures closed loop system, incorporating each other’s waste. Example: The coffee maker’s bean chaff is used as a substrate for the mushroom business. The brewery’s leftover grain is fed to aquaponic tilapia, and their waste helps grow greens. In the near future, an anerobic digester will convert all the food waste into energy and power the entire building. 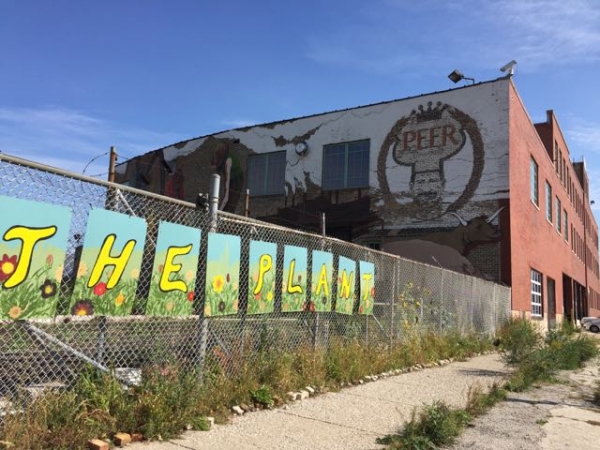 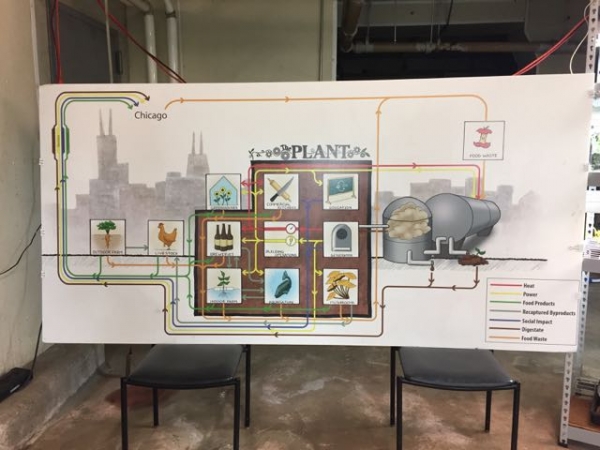 - diagram of the closed loop system 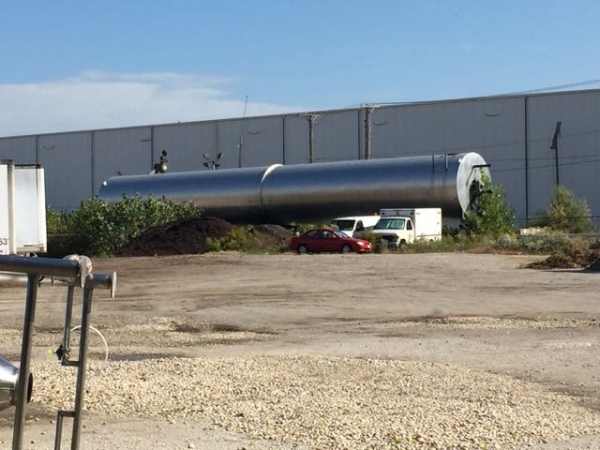 Urban Cuisine Tour Stop #4
Windy City Harvest
This urban agriculture education and jobs-training initiative (a project of the Botanic Garden) is helping to build Chicago’s urban food system. Their eight acres of urban farmland include the second largest roof garden in the U.S. - a half-acre atop McCormick Place. The garden grows “city crops” that can compete with traditional agriculture and make for a sustainable business model. So no hard to grow grains, or super easy and cheap zucchini and squash, but specialties like artisan greens and peppers, carrots, hops, beets, radishes, herbs, a tea garden, etc. The building’s original green roof has been adapted for crops with shallow roots, because weight limits prevent the addition of more soil. But it still yields 8,000 pounds of food, and 240 pounds of worm castings, annually. 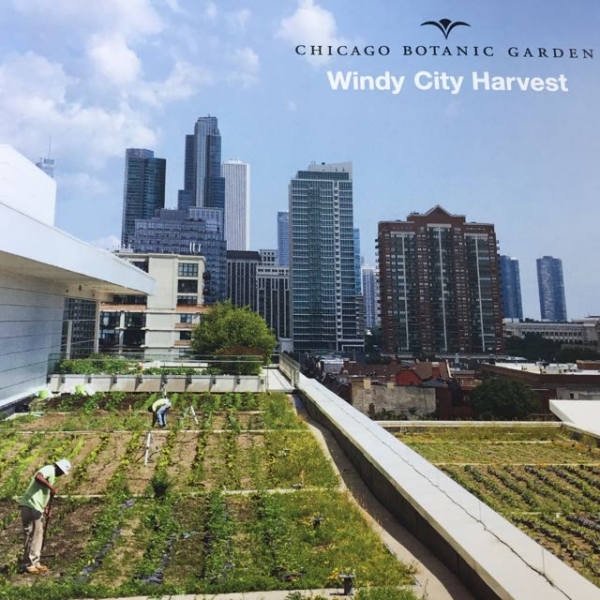 Urban Cuisine Tour Stop #5
Metro Farms
Finally a stop at this a large-scale tilapia/greens greenhouse - 10,300 square feet that produce 500 pounds of food a week at peak. Owner Benjamin Kant believes, as I do, aquaponics is superior / more high-vibe than hydroponics because the incorporation of fish poop in the fertilization and growing process mimics soil. “I think growing is as much about biology as it is chemistry which is why aquaponic is superior to hydroponic,” says Kant. Think about it – how can we replace soil until we know what's in it? (for one thing, microbes). 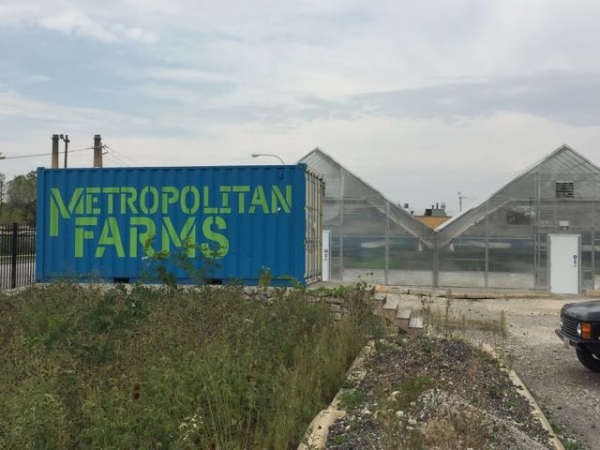 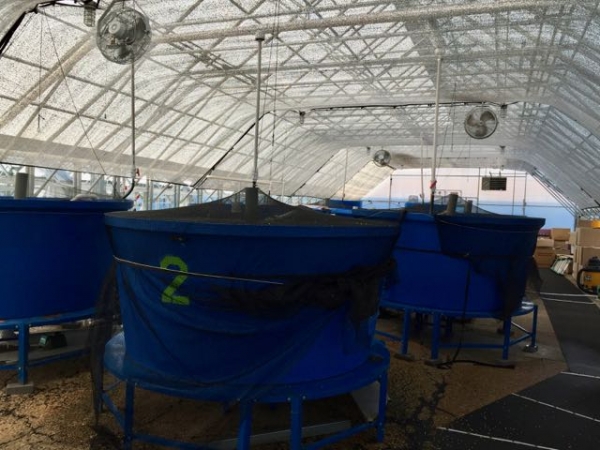 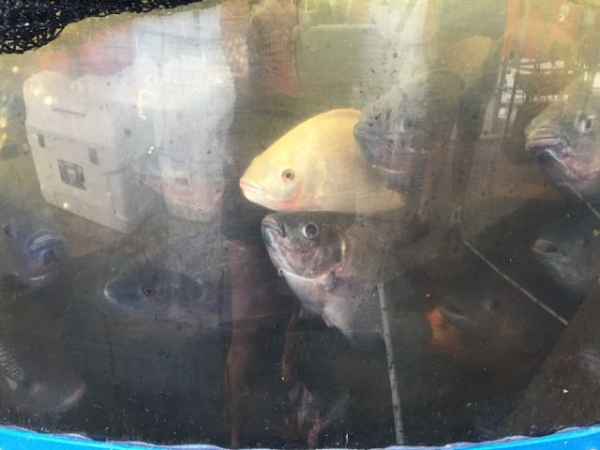 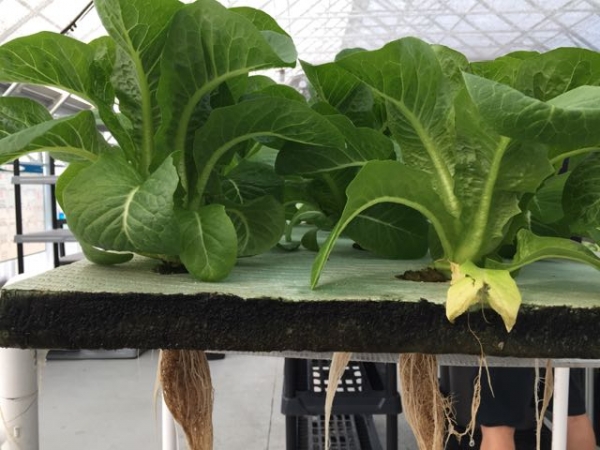 On a local note:
Santa Clara County has a budding urban ag scene. A movement to grow food in backyards and public spaces – and improve community health in the process – is being fueled in part by 2014’s Measure Q, a 15-year parcel tax that generates funding for land conservation projects. As reported by New American Media, the Santa Clara Valley Open Space Authority (SCVOSA), the independent special district responsible for implementing Measure Q, has devoted up to a quarter of funds for projects in urban areas, through an Urban Open Space grant program.

Also, last fall the Santa Clara County Board of Supervisors approved the Urban Agriculture Incentive Zone (UAIZ), which gives landowners a tax break for committing land to food production. San Francisco and Sacramento have similar programs in place. In San Jose specifically, up to 600 sites may be eligible for the incentive, if adopted by the City Council, which votes on the ordinance next month. Learn more here.


And for more about the future of food...
Join us for reThink Food, —a joint initiative of The Culinary Institute of America and the MIT Media Lab—November 4–6 at the CIA at Greystone in the Napa Valley. This year’s program explores the tensions between old and new, novel and familiar, tradition and innovation, and delves into the intersection of food with some of technology’s most exciting advancements around AI, robotics, virtual reality, big data, and genetics. The three-day event features interactive sessions and food experiences. It’s a fantastic gathering of really interesting people and ideas, and some great tasting food too.

So here's a question for you. What's the hardest thing to tackle when starting an urban farm?

Thanks, Laura, for this informative -- and exciting! -- look at the creative ways people in other parts of the country are managing to find places to grow food in highly populated urban environments. While our first goal should be to conserve farmland, these methods, especially roof top gardens, also show that it's possible to grow food locally and reduce the greenhouse gases from trucking food in from the countryside. it gives us all hope for humanity's future to see these innovative ideas taking root (pun intended!).


I think one of the hardest parts to developing an urban garden must be the irrigation systems.


Interesting, informative! IMO one of your best posts on this blog, Laura. I remember the idea of hydroponic farming (no soil, simple synthetic fertilizers) getting lots of hopeful media play in the US of the early to middle 1960s, complete with Science Kits for us kids to try it at home. Along with the United Nations and Esperanto, it was presented by some people as among the magic innovations due to very soon solve all the world's problems. But I think the main practical uses of hydroponics that established themselves, in California anyway, were home-sprouted seeds (very trendy by 1970), and certain non-mainstream agriculture, especially around Mendocino and Humboldt Counties.


Thanks Max. You know I just did a University of Michigan engineering school tour with my 16 year old nephew. Wow! College sure has changed since I was there - they have so much more. Inspires me to go back actually! They have huge workshops at U of M were E students build wall, bridges, boats, planes, spaceships, cars, nano things; so many departments of engineering. But I couldn't help but wonder, where is the food engineering school? I don't mean food science to create new eats; I mean schools which teach us how to build more sustainable agriculture systems. Does anyone know of a "food systems engineering school" in the US?

Report Objectionable Content
+  Like this comment
Posted by Casa De Cerveza, a resident of Evergreen Park,
on Oct 13, 2016 at 10:30 am
Casa De Cerveza is a registered user.


Casa, well that's an interesting link. I was just at the Urban Ag meeting for San Francisco, and found it interesting that the majority of the meeting was about how to make use of the very little land available in the City. No one was discussing Urban Ag WITHOUT land, which is what I am tasked to discover. So yes - I think rooftops are key to moving the issue forward. San Francisco, interestingly enough, seems to be behind the ball on UA.


Bambi, I thought I responded to you but don't see it. Good guess, but what heard over and over again, when asking those doing urban ag, is the biggest issue is contaminated land. Most vacant city land is that way because it used to have an old building, house, gas station or whatever, on it, making it too contaminated to grow in without adjustment. Solutions? Some plots are capped and new soil brought in. Sometimes the beds are raised above the contamination. Sometimes farmers grow vertically and not in the land at all. Sometimes no land is used - i.e. hydro and aquaponics.

Stroll the streets of Paris on the Peninsula with Bon Marché
By The Peninsula Foodist | 2 comments | 4,395 views

Democracy and our police departments
By Diana Diamond | 6 comments | 3,321 views