Everman, who opened Mexican eatery Cocina Central at the renovated El Camino Real shopping center in 2014, said he decided to sell because his operating partner, based in San Diego, "was unable to keep up with the regular management, so it didn't make sense to hang onto it."

Everman had teamed up with Isabel Cruz, who owns and operates six restaurants, including Isabel's Cantina in San Diego, to open the Mountain View Restaurant. He said in 2014 that they intended to open two or three more locations, though that plan never came to fruition. 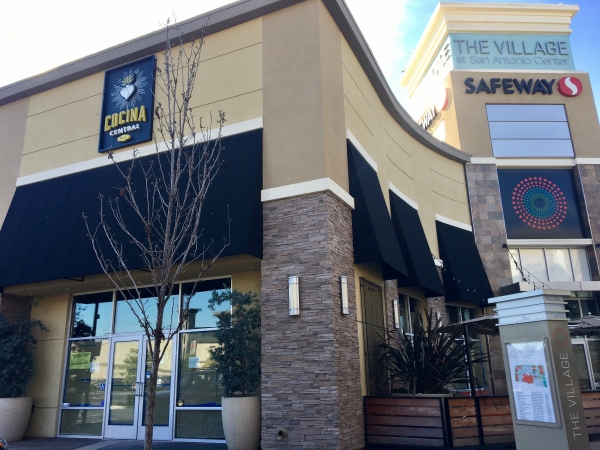 Everman sold the restaurant about six months ago to Mizu Sushi Bar & Grill, which also has a location in Southern California.

A public notice of the ownership-change application was posted in the restaurant's windows in late December.

Stay tuned on an opening date for the new restaurant. Mizu will join a myriad of dining options at the shopping center, including Paul Martin's, Veggie Grill, Sajj Mediterranean, Pacific Catch, The Counter, Pizza Studio and Nekter Juice.

Cautiously optimistic. This was clearly the wrong neighborhood for a faux-high-end Mexican joint. Mizu seems pretty far from a classic Japanese restaurant, but hopefully it will be better than Sushiko...

Now if only Pizza Studio could get replaced by a proper Indian place, life would be great. I wonder if the new buildings coming up have any ground floor spots set aside for restaurants, does anyone know?

Report Objectionable Content
Posted by Good bye to a bad restauarant, a resident of Mountain View,
on Jan 16, 2017 at 4:13 pm


I made the mistake of eating at Cocina Central once. Although the place was not crowded it took forever for the server to take my order. The food itself was mediocre at best and the server never came by to see how I was doing, no wonder they closed up

Report Objectionable Content
Posted by no thank you, a resident of Professorville,
on Jan 16, 2017 at 6:42 pm


No legitimate sushi restaurant will serve BBQ or fried foods. The fumes from the grill and fryer will contaminate the sushi rice and raw fish. We're going to pass on this one.

Report Objectionable Content
Posted by no thank you, a resident of Professorville,
on Jan 16, 2017 at 6:50 pm


Perhaps I was too harsh in the previous comment about "no legitimate sushi restaurant". I should have said no good quality sushi restaurant will serve BBQ or fried foods. The budget lunch special places have to be creative to make up for their food quality level.

Report Objectionable Content
Posted by Poke Lover, a resident of Mountain View,
on Jan 16, 2017 at 9:36 pm

I beg to differ. Any proper Izakaya serves both plenty of grilled foods and sushi and sashimi. Sure, many Japanese joints in the US with very large menus (you know, the type that serves sauce-drenched rolls) end up being terrible, but it's not because they happen to have a grill.

Report Objectionable Content
Posted by LuvSushi, a resident of Mountain View,
on Mar 31, 2017 at 9:46 am

Obviously you have not been to the Mizu location in San Jose. I would recommend to try it before you make any negative comments toward it. Their food is absolutely AMAZING! I love their sushi so much! So fresh and flavorful. I am so excited that they are expanding their branch to further up the Peninsula. Now it is close to where I work also! I recommend for everybody to try this new Mizu Sushi and Grill!

State Street Market plans overhaul of its eateries as it cuts ties with Bon Appétit, triggering layoffs
By The Peninsula Foodist | 11 comments | 4,008 views

Doing more with the natural spaces we have
By Sherry Listgarten | 6 comments | 2,587 views