Uploaded: Apr 6, 2017
Chantilly, a French and Northern Italian restaurant that got its start in 1974 in Palo Alto, has shuttered, its owners confirmed this week.

Chantilly closed its doors on El Camino Real in Redwood City on Saturday, April 1. The restaurant had operated there since 1999, when it relocated from Palo Alto and the owners changed its name from Chantilly II to Chantilly.

Kittrell and Gus Talasaz, the original owners, were joined by executive chef and partner Bernabe Oropeza and his wife Maria in the early 1990s, according to the restaurant's website.

"We thank the four generations of families, corporations and dedicated patrons who walked through our doors, helping make the Chantilly one of the top eating establishments in the Bay Area," the four co-owners wrote in an email on Wednesday, declining to comment further.

The two-story building at 3001 El Camino Real afforded Chantilly with private dining rooms — where "for over three decades, some of the most significant Silicon Valley deals have occurred," the restaurant's website reads — plus a private bar, a floor dedicated to special events and a large wine cellar, partially on display in one of the popular private rooms, The Wine Room. 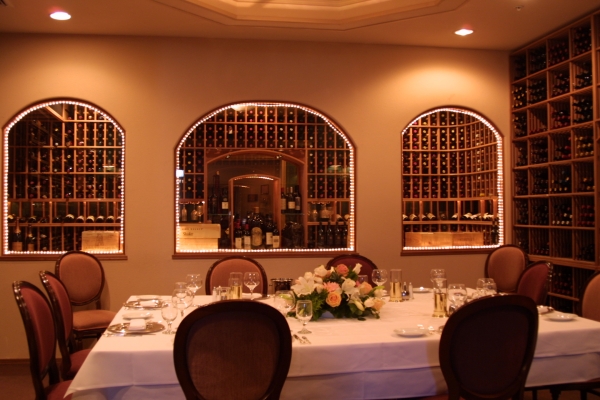 A 1994 Palo Alto Weekly review of the second iteration of the restaurant describes the original Chantilly on Ramona Street as a "haunt for high-tech movers and shakers."

"Muckety-mucks from Intel, Intuit, Microsoft, AMD, National Semiconductor, Hewlett-Packard and all the other big names in the Valley were closeted in the private rooms of Chantilly II while the rest of us ate in the main dining room and wondered what deals were being cut behind those doors," reviewer Laura Reily wrote. "The jury's still out on whether technology's titans will pull up a chair at the new Chantilly, but everyone else seems to have settled right in."

For fans of Chantilly, reminisce with a review of the original Palo Alto location from 1994.

I have such fond memories of Chantilly when it was on Ramona back in the late 70s. I was a student at Paly and had a couple of hot dates at Chantilly. The spinach salad with hot bacon dressing, prepared at your table, was the thing. My date would also send me long stemmed roses that came in a long white box. Those were the days!


WHAT???!!!!!! Is this an April Fool's joke? You can't possibly mean this, Gus. You could have at least invited us to The Last Supper!! What will we ever do for our "special dinners"? Where can we possibly go that could ever be the same?I will so miss your gentle smile, your cheerful and obliging staff, the roses, the quiet dining, the wonderful food, and the altogether "special-ness" of our favorite place. How about we run a special story on you and the "whys and wherefores"? I'm trusting this is at least good news for you, if not your local "gentry". Finally, you get to be just a regular guy, home for dinner, reading the paper, catching up on family activities, spending time with grandchildren, etc. I get that. But we will miss you terribly. Sending lots and lots of hugs to you and all your fabulous staff. You have created a void that no one can fill. Love & Hugs, Ron & Elsie

Report Objectionable Content
Posted by Margo Ritter, a resident of Atherton: other,
on Apr 6, 2017 at 2:15 pm


Oh dear, we are so sorry ! Every summer when we come back to Atherton we head to Chantilly for a nice quiet and romantic dinner, the dover sole was out of this world ! It was so elegant and we were always made to feel so special. How I loved dressing up to dine there, this coming summer just won't be the same. Thanks for the wonderful memories and I still have two imari ashtrays from the Palo Alto location that I now use for candies ! Margo and Pete


It wasn't just the food at Chantilly, it was the service and the quiet. It is rare these days to dine at a restaurant where you can talk to your table mates without repeating or straining to hear. It was a supremely civilized place. My memories run the gamut from a special dinner with the Princess of Sweden to a tasting and food pairing of Duckhorn wines, and most especially dining with good friends in the main dining room and being able to have a conversation.

Thank you for the many years of good service. You will be missed.


Ahhh, I feel sad. We celebrated so many family events there -- birthdays, baby announcements, wedding anniversaries. Our family loves Gus and his family.

Report Objectionable Content
Posted by davidcowan, a resident of Atherton: Lindenwood,
on Apr 9, 2017 at 6:42 pm


Our whole family is very sad at this turn of events. I really wish there was a "we are closing in two weeks" announcement so I could show up and get 14 more days of your steak calamari (best in the Bay Area!). Please, please, tell me you are opening up elsewhere in the area, we are willing to drive.....

Report Objectionable Content
Posted by Beth Pascal, a resident of another community,
on Apr 20, 2017 at 10:48 pm


Pure class from greeting to the end of the meal! Have celebrated many landmark birthdays, anniversary's, and other signifant events including the night our daughter found out she had passed the bar! We will miss the fabulous food, the ambiance and the staff and owners! There is no other place on the Peninsula that comes close to matching Chantilly's!
Wishing Gus, his son and family a well-deserved retirement!

Report Objectionable Content
Posted by Hicham Dri, a resident of Los Altos,
on May 8, 2017 at 8:12 am


Gus , ?????
You will be missed in this industry, truly one of a kind restaurateur that knows his trade well, dining is an event that speaks to your soul and Gus knows how provide the perfect atmosphere to achieve that, from his story telling to his food and wine recommendation rest assured that you will have a great experience at his restaurant.
I worked for Gus for seven years, the experience and the knowledge I acquired was so beneficial.
Thank you for your support during my work there Boss.
I wish you a very relaxing life full of joy laughter and happiness, you deserve it.
Cheers!

This barbecue business was kicked out of Belmont. Now it's a Sunday fixture in Redwood City.
By The Peninsula Foodist | 6 comments | 5,489 views