A sign recently appeared in the fast-casual restaurant's windows at 292 Castro St. announcing that Srasa Kitchen is "consolidating operations" at an original location on Middlefield Road. The sign indicates a new concept called Pushcart Creamery, described as "fresh handmade ice cream rolls," will be coming soon. The restaurant's website no longer lists the Castro Street location and information.

Poon said, however, that Srasa No. 2 is closed only temporarily. He has not yet decided if he's opening an ice cream shop in its place. 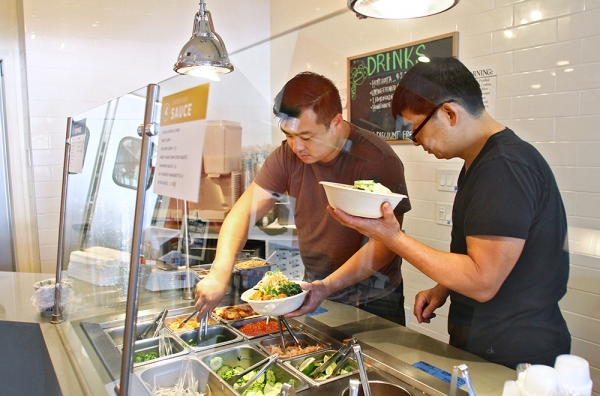 He said staffing issues ("cost," not difficulty hiring), his parents' decision to retire and his feeling spread thin led to the temporary closure. The ice cream shop was an "initial idea" but it's still up in the air, he said.

"Nothing is for sure yet," Poon said. "We haven't made any final decisions."

Poon said a more concrete decision will be made in the next few weeks; check back here for updates.

The Poon family opened the first Srasa Kitchen in Mountain View in 2015. Last year, they decided to close Poon's downtown restaurant Buffalo and open a second Srasa in the same space.

At Srasa, diners can choose from pre-set combinations or build their own Asian-fusion bowls by drawing on an array of fresh Cambodian, Thai, Vietnamese and Chinese ingredients.

I'm getting really frustrated with this. If you don't want to own a restaurant, sell it to someone else who will actually keep something open for more than 3 months this time. :/


A decent percentage of Castro St restaurants are usually near empty as city leaders think they can magically talk people out of their cars by ELIMINATING downtown parking.

I've had dinner in dt Palo Alto and Redwood City in the past few weeks-- hopping restaurant scene, and easy parking. Hmm...


I like Srasa. Good concept. Good food but the portions seem to get smaller and smaller and selections more and more limited.


I think the ice cream idea should be tested. Owner, if you are listening; treat this idea the way a product manager would before building it: talk to people on the street, ask them what kind of ice cream place they would want, ask them where they currently go, ask them what they don't like about the current place, etc.

I for one would like an ice cream shop similar to the high-end creameries moving into Palo Alto and Los Altos. You might even think about franchising. Maybe there is a cool shop in LA that hasn't expanded here yet (like Poke Bar which moved here last year and is very popular).


Common problem when owners are not 100% committed to building a brand. Instead he will be labeled a "revolving" restaurant owner, and will never gain traction unless he commits, and advertises his ventures. Both Buffalo and Srasa are great concepts - but without 100% sweat and commitment....just round and round and round...like a merry go round....am I sad? No...Get someone who is a committed Chef/Owner who is passionate about Mountain View!


I've dined at the Srasa on Middlefield a couple of times and have been pleased with the quality of their product each time. It's nice having a couple of restaurants in the Middlefield-Whisman neighborhood and my family also enjoys Joy Sushi for lunch and dinner.


Bring back Buffalo! That was a big hit, and like no other on the street. We ate there weekly and were saddened to see it close!


Some commenters above seem to be unaware of various background, so here's some review:

1. This second Srasa location struggled from the start to find employees. It's a problem for Castro St. businesses in general (in early March, a local photographer walked down the street and documented "Help Wanted" signs at 25 of 79 businesses), especially with the astronomical local housing costs.

2. The Poon family are actually among the longest-tenured and most-successful restaurateurs in MV, with a track record of gauging and serving what the public wants. The original Srasa on Middlefield was great when we tried it -- a decent value and unusual, interesting offerings and (as "NW Resident" already noted) a welcome new option in its neighborhood.

3. I miss Buffalo too, but these owners retired "Buffalo" deliberately and for good business reasons (which they explained at the time to anyone who asked). The "modern burger pub" concept already had serious local competition nearby (Bierhaus, Steins); but the popular Eureka group opening a block away last Spring, widely announced in advance (it now dominates that market for the neighborhood), sealed their plans. Their Srasa on Middlefield was much more unique, and already doing well.

4. Finally, most complaints about "overcrowded" Castro-Street restaurants come from people who insist on trying to go there at exactly peak-demand times when everyone else does so. That's a self-generated problem, if only they could step back and notice. Slightly off peak times, parking remains easy. I never try to park there at 7PM Fri. or Sat. night, or 12-1 weekdays for lunch. But avoiding those peaks still leaves plenty of convenient times for those who must park.


Yes,find out what the locals want! Ice cream would be an awesome addition to our downtown. Especially since there's only one ice cream shop. I'm with the other commenter... we want something like Tin Pot Creamery. Provide us with ice cream made with organic ingredients (including the milk, sugar and eggs) and I guarantee you... you will have a huge following. Take a look around downtown. So many restaurants now are part of the "never ever" program. Never using meats with hormones and antibiotics. Sourcing their meats and seafood locally and/or sustainably. So yes... a sweet shop that follows this belief will definitely see customers!