Uploaded: Apr 27, 2017
Fans of longtime Mountain View Chinese restaurant Fu Lam Mum have likely noticed that the restaurant recently closed for remodeling. Have no fear: Owner Ben Quan hopes to reopen the restaurant by August or September, he said Thursday. 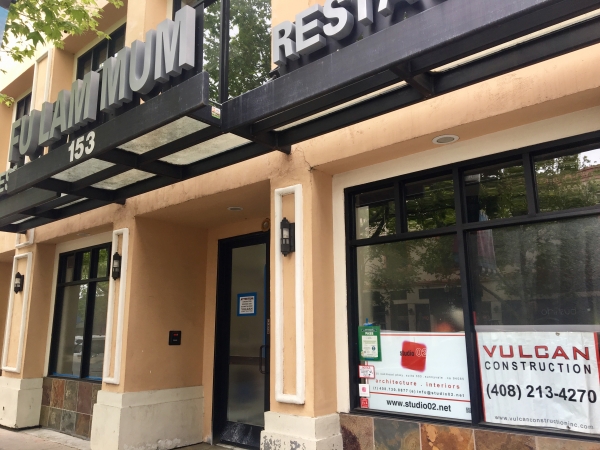 Quan, who also owns the property at 153 Castro St., decided to convert a second-floor mezzanine previously used by the restaurant to office space. Tubular Labs, a video content company that currently occupies a third floor of the building, plans to expand into the remodeled space, Quan said. City building permits show they intend to add 2,335 square feet to the second floor.

Fu Lam Mum will remain on the first floor.

Recently? It's been closed for at least 2+ months.

Report Objectionable Content
Posted by Brian, a resident of Menlo Park: The Willows,
on Apr 28, 2017 at 9:40 am


I agree with Out of date, it has been closed for months. In fact I want to say it closed around Christmas so this info is just a little late to be useful.

Report Objectionable Content
Posted by john_alderman, a resident of Crescent Park,
on Apr 28, 2017 at 10:21 am
john_alderman is a registered user.


@Brian - since it going to be closed for the next ~5 months, it is still going to be useful information for a while.

Report Objectionable Content
Posted by Abigail, a resident of Willowgate,
on Apr 28, 2017 at 12:10 pm


They had posted about expanding the second floor. I was hoping that meant more seating for dim sum but it sounds like it means less seating overall. I hope I can get a dim sum table when they reopen!


Who cares? At the rate restaurants come and go these days in Mountain View, I hardly find this news, or useful.


That means the open air eating area and decorative wall will be gone. 8 month is a long remolding time.

Report Objectionable Content
Posted by Reader, a resident of another community,
on May 1, 2017 at 8:52 am

Well, the employees certainly care and I'm guessing the ownership does as well.

Also, this restaurant is fairly busy, so I'm guessing a lot of diners care. If you don't care, that's fine, but others do care about things that you don't care for. And not just restaurant closures.


Just look up the building permits for the details...

Report Objectionable Content
Posted by SukwinderDixit, a resident of Rex Manor,
on May 1, 2017 at 3:41 pm
SukwinderDixit is a registered user.


man i miss that place they make the good foods


Congrats to the owner, it's easy money to rent the second floor than the restaurant business. Imagine how many dim sum and stir-fry dishes they need to sell for the same amount of profit!

Report Objectionable Content
Posted by Sandy DiGiulioWassonQuan, a resident of Mountain View,
on May 3, 2017 at 10:15 am


Hopefully a remodel will include an upgrade in quality of food. We were ashamed and embarrassed by the last meal we had there when we had guests. Soup seemed to be made of leftovers from the compost bin. Rest of meal was also very poor and skimpy.

Report Objectionable Content
Posted by Eater, a resident of Mountain View,
on May 3, 2017 at 10:58 am


Sandy, what did the management say, when you brought that complaint to their attention in person? Which is the principled, responsible, proper thing to do, if you ever have a seriously disappointing experience in a restaurant. Reporting it to someone who can do something about it, and who may also try to make amends, also helps to distinguish you from the passive-aggressive-disorder customer types who say never a single word in person, instead saving, even (as it were) cherishing, their resentment to later spout off online, even if the act of doing so conveys much more about themselves than about the restaurant.

Also, many restaurant kitchens have "off" days, of no significance to a typical experience or trend. All the more reason to report them to the management.

Report Objectionable Content
Posted by Alix, a resident of Charleston Meadows,
on Jun 20, 2017 at 9:26 pm

Report Objectionable Content
Posted by Mark, a resident of Old Mountain View,
on Jun 27, 2017 at 9:22 pm


Sandy is spot on. I used to eat there or do take out 3-4 nights a week. In the year before they closed to remodel, their food quality steadily declined, they cut back on their hours, raised their prices a few times, and instead of being busy they were often empty. Hopefully they will improve their kitchen and bring back the good prices and the good food.

How we eat away at our open space, even in Palo Alto
By Sherry Listgarten | 5 comments | 7,533 views