Uploaded: Jun 12, 2017
At Hiroshi in downtown Los Altos, there is one seating of eight people each evening, no printed menu and a price per head upwards of $400.

Owner and namesake Hiroshi Kimura, a native of Japan, opened the restaurant at 328 Main St. in March. The focus is on Wagyu beef flown in weekly from Japan — as is seafood like crab and uni — served omakase-style, said Kevin Biggerstaff, the restaurant's general manager.

He described the one-seating concept as popular in Japan and becoming more so in the United States. The restaurant orders enough food for eight people and draws on whatever is available, hence the lack of a set menu. Kimura accommodates vegetarians or pescatarians, Biggerstaff said. 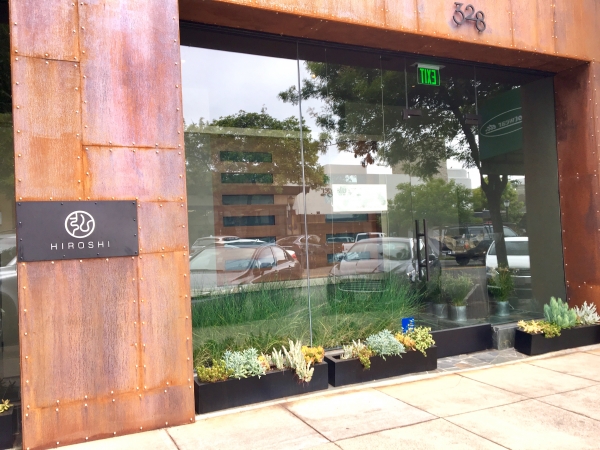 Hiroshi serves Wagyu beef flown in weekly from Japan to one group of diners each night. Photo by Elena Kadvany.

Previously, Kimura owned Yakiniku Hiroshi, a Japanese restaurant in Honolulu where customers could grill meats at their tables, for 28 years. He also ran several restaurants in Tokyo. His "speciality," Biggerstaff said, is Wagyu steak.

On the Hiroshi website, Kimura writes: "Since the age of sixteen, I have spent forty plus years in pursuit of perfecting the art of Wagyu steaks. I can now proudly share with you all my accumulated experiences and knowledge at our restaurant, to provide you with a Wagyu steak experience like none other."

Kimura decided to open the restaurant after a recent visit took him through downtown Los Altos, which reminded him of certain areas of Japan, Biggerstaff said. (For those who might be surprised to hear that, it was Los Altos' cleanliness and quietness that felt familiar to Kimura.)

The Los Altos restaurant espouses the spirit of "omotenashi," Kimura writes, which describes Japanese hospitality. Everything inside Hiroshi, from the food and drink to tableware, has been personally "hand-picked and/or prepared" by Kimura, the website states. A recent diner posted a photo on Yelp showing "handcut crystal glasses" on the dining table, which she said was made from a 800-year-old Japanese keyaki tree. The wine list is also shown on an iPad.

For more photos of the space and food, head to Hiroshi's Facebook page.

Since the restaurant orders enough ingredients to accommodate eight people, Hiroshi has taken groups of five or six, but the diners pay the same price. The dinner starts at about $395 per person before tax and gratuity but has been averaging at about $500 per diner, Biggerstaff said.

Wow, can't wait for a special occasion to visit Hiroshi!


Wow, when my next wildcat oil well comes in I might think about it. But, in the meantime, Elena, just a little advice from someone who can't and will never be able to afford to eat there: You should write for us common folks, not for the super rich. Calculate how many of your faithful readers you're reaching with that article...maybe .01%? Serve the PAO readers better than that.


@Gale, it's a food blog. If it were a stamp collector blog, I'm sure we'd see $500 routinely spent for a square inch of paper, but that wouldn't interest near so many people.

This does, however, put a whole new spin on the carbon footprint of beef.


@Gale Johnson - I think she tries to cover all local restaurant news, not just expensive places. Just last week, she covered Kali Greek Kitchen, as new inexpensive take-out restaurant on California Ave. I never plan to eat a $400 meal, but I do appreciate the diversity of coverage in this column.

Report Objectionable Content
+   3 people like this
Posted by john_alderman, a resident of Crescent Park,
on Jun 15, 2017 at 1:29 pm
john_alderman is a registered user.


@gale- Here is an article about Hobee's for you.


Report Objectionable Content
+   1 person likes this
Posted by Bette, a resident of Another Palo Alto neighborhood,
on Jun 15, 2017 at 7:22 pm


The strong connection between food choices and environmental degradation needs awareness. The issue isn't just the heavy focus on meat---but also flying it in from distant places and increased use of fossil fuels and pollutants.

Many suffer from the air traffic over Palo Alto yet support systems that bring more of same.

Am sure the new restaurant is exquisite in artistry and dishes. Perhaps better in an art museum than to eat in on our rapidly failing planet?