Belly up to the new "Cold Bar," which opened in June toward the front of the cafe's outdoor courtyard on University Avenue, for an "Oji Old Fashioned" with slow-dripped coffee and jasmine orange peel ($6) or a "Suzuki Refresher" with sparkling cold-brew coffee, mint and lime ($8). (Blue Bottle did at one point after opening in 2015 apply for an actual liquor license to serve beer and wine, but the process was halted at some point, a company spokesperson said.)

Palo Alto's Cold Bar is the brainchild of manager Corey Lenko and lead barista Cristian Lara. The bar's offerings go "beyond what you might except from a coffee bar," the two wrote in an email.

"Here, coffee is an ingredient and also the star. By combining a variety of coffees with other ingredients, guests can appreciate the distinct flavor notes of each coffee and understand the coffee’s contribution to each drink," they said.

The drink recipes were developed in-house and also "crowdsourced from Blue Bottle staff from every corner of the company," Lenko and Lara said.

Only two other Blue Bottles have Cold Bars, in San Francisco and Los Angeles.

Palo Alto's Cold Bar currently has seven drinks on the menu (see below). There may be seasonal additions in the future, Lenko and Lara said. Customers can also order pourover coffees and food at the Cold Bar; espresso drinks are still ordered inside the cafe. 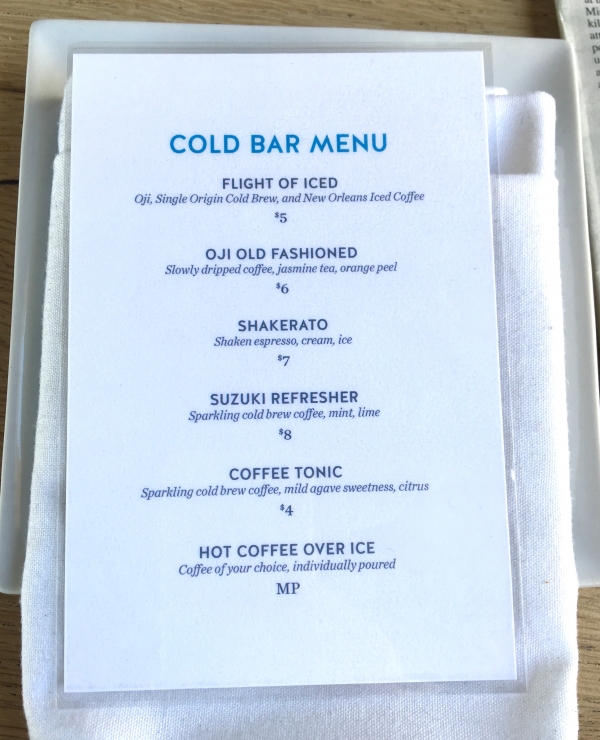 
No one can please everyone all the time. (And this comment is not just about coffee bars or restaurants in general.)

If you don't like it, don't buy it. Vote with your dollars.

While the idea doesn't appeal to me either, at least I can keep an open mind to the possibility that someone might enjoy these new offerings.


Oh, and one other thing. Comments like "yuk" might feel cathartic, but they aren't a particularly neighborly thing to say to business owner who is trying to make it in your neighborhood.

Again, if you don't like it, go somewhere else. It's not like Blue Bottle Coffee has deliberately done something to ruin your existence.