Uploaded: Jul 27, 2017
Nearly three weeks after the much-anticipated opening of high-end Japanese restaurant Nobu at The Epiphany Hotel in downtown Palo Alto, the hotel announced Wednesday that it will now also be managed by Nobu Hospitality group.

The Hamilton Avenue hotel still remains under the ownership of Oracle founder Larry Ellison, but Nobu Hospitality — a company founded by chef Nobu Matsuhisa, actor Robert De Niro and Hollywood producer Meir Teper —will assume management on Oct. 2. The hotel has been managed by Joie de Vivre, a boutique hotel chain based in San Francisco.

The 83-room hotel will be "rebranded" as the "Nobu Hotel Epiphany," a press release states. Ellison, who purchased The Epiphany in 2015, previously partnered with Matsuhisa to build a hotel on the Pacific Coast Highway in Malibu. There is also a Nobu at the Lanai, Hawaii, Four Seasons, which Ellison owns. 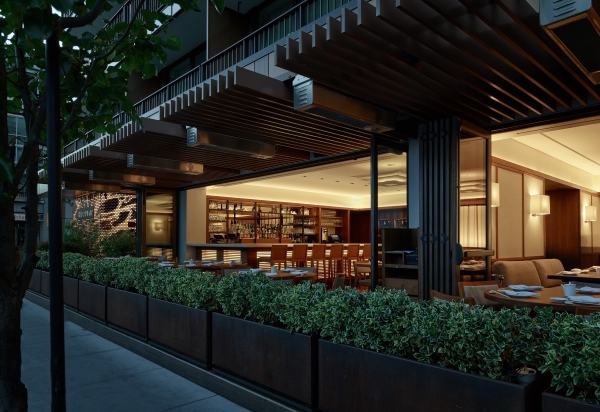 The new Nobu at The Epiphany Hotel in downtown Palo Alto. Photo by Kevin Scott/Courtesy Nobu.

Trevor Horwell, chief executive officer of Nobu Hospitality, said in the release that the company is "pleased" to expand its West Coast presence.

"The hotel will continue to maintain its individuality and distinct character while benefiting from Nobu's operating culture and philosophy," he said.

Nobu Hospitality also operates hotels in cities from Malibu and Miami to Manila, London, Ibiza and elsewhere. The first Nobu Hotel opened in 2013 inside Caesars Palace Las Vegas. Nobu hotels are places "to go and be seen," the hospitality group's website states.

The current rate for a premium king room at The Epiphany, excluding taxes and fees, starts at $449 per night, per the hotel website. The hotel did not say whether prices will change under the new management, but that "rates will continue to be priced competitively within the market.

"Nobu is a luxury, lifestyle brand and competes with top luxury hotel brands globally," the hospitality group said in a statement.

Under the new management, the Palo Alto hotel will offer "exclusive Nobu amenities" like 24-hour room service from the restaurant and priority reservations for hotel guests.

Three new restaurants from former Manresa chef David Kinch and his team are coming to Los Gatos
By The Peninsula Foodist | 2 comments | 4,658 views