Bacchus Management Group has taken over the former Chantilly space at 3001 El Camino Real, founding partner Tim Stannard said this week. Chantilly closed in April after 43 years of business. Chantilly had a long and storied history in the area, with rumors of high-profile Silicon Valley deals being made in its private rooms.

Stannard said the new restaurant will be similar in concept to The Village Pub and Spruce in San Francisco, which Bacchus also owns, but with a special focus on premium steak. 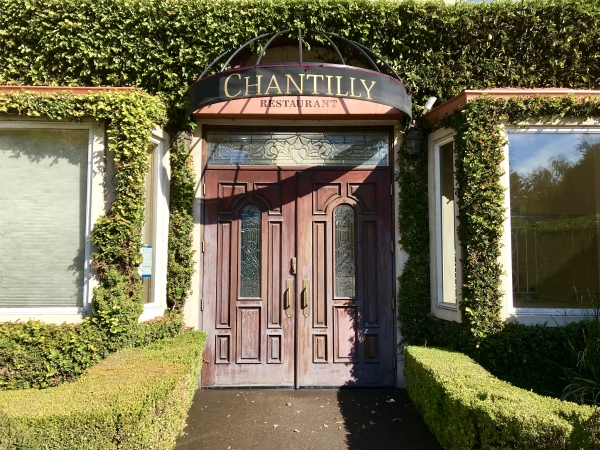 The Bay Area has long been lacking when it comes to quality steakhouses, he said, and he wants to fill that void. The new restaurant will draw on an existing partnership Bacchus has with Flannery Beef, whose owner carefully selects and dry-ages premium beef from all over the country.

Stannard is hoping the restaurant will follow in The Village Pub and Spruce's footsteps and earn one Michelin star and a Wine Spectator Grand Award, the magazine's highest award. Though the building's address is located in Redwood City, its close proximity to Atherton means he envisions it being embedded in that community.

"It was an opportunity to build what I think is another really special neighborhood restaurant," Stannard said. "Our goal is to be of one-star Michelin quality right out the gate."

The restaurant will have formal wait service and a sommelier.

Stannard said they hope to start construction in the next month or so, with a goal of opening in summer 2018. Staff are already in training at The Village Pub.

Stannard stayed mum on what the restaurant's name will be, but said they're "digging around" Atherton history to find something relevant to the community. (He's also keen on a name with a personal connection: a hamburger shack in New Haven, Connecticut, where his father took him growing up, called Louis' Lunch.)

Stannard first took over The Village Pub in 2001. Bacchus also now operates newly opened The Village Bakery in Woodside, The Saratoga in San Francisco, four Pizza Antica locations and Oakland coffee company Roast Co. All of the restaurants are supplied by SMIP Ranch, a private farm in the hills above Woodside.

I've decided that restaurants around here benefit from being near other restaurants. Downtown Redwood City AND Palo Alto both enable potential diners to stroll along the sidewalk, read menus, check out the vibe & pricing, and see if they like the crowd. Then, if there's a table open - terrific! If not, on to the next one ... !!! Milagro sends you a text when you're table is ready ...


Chantilly ran 43 years in the location, before closing this year (to customer dismay in comments): Web Link Other "destination" restaurants around the region (especially if they have Michelin stars) stand by themselves, I'm thinking of examples and they are pretty much special-occasion places anyway, less practical for spur-of-the-moment eating choices. I think Charles's point is good for many restaurants, but from the description above (even first paragraph), this experienced firm aims to make another stand-alone, "occasion" venue.

"Special focus on premium steak" brings to mind two implications: more-traditionalistic diners than those favoring Baumé or Chez TJ (steakhouses thrive in other parts of the country where things like Asian cuisines, seafood, and "fusions" are less common), and power business meals. Just hoping the wine list shows range and novelty, and not just a corresponding "special focus on" heavy and cult California cabernets (compare Forbes Mill steakhouse in Los Gatos), or, even worse, one of those turn-key, everything-offered-by-Southern-W&S tourist-restaurant lists that, when combined with 20k (or is it 30?) of advertising expenditure at The Wine Spectator, reliably secure that magazine's "coveted" wine-list awards.


Reality check; "Chantilly ran 43 years in the location" is not true, they were in downtown PA for most of my lifetime, and I'm 54 years young


Thanks for the correction on that detail, though it doesn't really speak to the situation I mentioned. However many of its 43 years were elsewhere, Chantilly still occupied that Redwood City space for a LONG time and stayed in business there, which was my point (and separates places like it from the dense dining streets Charles Reilly mentioned). Like the Village Pub (about 30 years, counting original incarnation pre-Bacchus), Chez TJ (35 years I think), La Foret (39 years), 231 Ellsworth in San Mateo for many years, French Laundry in Yountville (23 years), Berkeley's Chez Panisse (46 years). These are different styles of restaurants, but all are special-occasion, expensive, destination places that get critical praise from out-of-town media like the Michelin Guide which is what this new business's owners say they plan. These restaurants all did good business despite standing apart, not in dense restaurant streets that we have in several peninsula towns, mine included, with many adjacent options for pedestrians to stroll past and choose, spur-of-the-moment. (Chez TJ is and 231 was near such restaurant areas, but not part of them, you would not pass their doors if you strolled past the other restaurants.)


I wonder what this future restaurant's impact will be on John Bentley's?

(Apparent answer: no impact, since the closure of Bentley's had already long been in the works.)

Report Objectionable Content
+   1 person likes this
Posted by Reader, a resident of another community,
on Dec 5, 2017 at 2:32 pm


Moreover, the John Bentley's location is not slated to be another restaurant. It is destined to become a senior living complex which will not compete with this new steakhouse.

Best of luck to this new steakhouse's operators and best wishes to John Bentley in his retirement.

What to do if you get a noisy Rheem/Ruud heat pump water heater
By Sherry Listgarten | 11 comments | 3,422 views

Palo Alto's most feared food critic is … an Aussiedoodle?
By The Peninsula Foodist | 14 comments | 3,132 views

Do Palo Alto city officials ever, ever have enough money?
By Diana Diamond | 27 comments | 2,257 views