Uploaded: Jan 16, 2018
Shake Shack, the burger darling of the East Coast, is coming to Palo Alto this fall.

Shake Shack announced on Tuesday that it will be opening at Stanford Shopping Center. The restaurant is taking over the Wells Fargo bank next to PF Chang's, along El Camino Real. 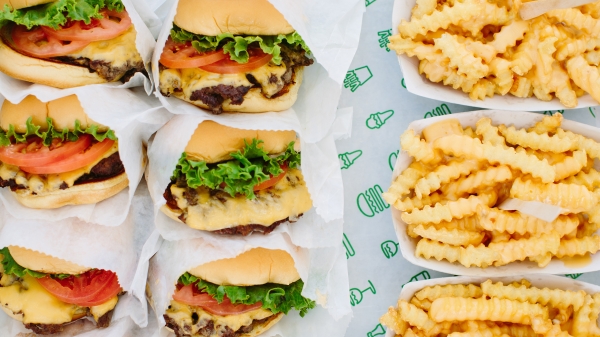 Shake Shack CEO Randy Garutti said in the release that the company has "long admired the talented chefs, winemakers and artisans of the Bay Area's vibrant food scene.

"It is with great respect and humility that we enter that landscape, deepen our West Coast roots, and bring a new community gathering place to this iconic city after so many years," he said.

Shake Shack, often described as In-N-Out's East Coast competition, started as a hot dog cart in New York City in 2004. The company has since grown exponentially, with more than 100 locations across the country, including eight in Southern California, and more than 50 international outposts in cities such as London, Istanbul, Tokyo and Moscow. Founder Danny Meyer is now a renowned restaurateur and CEO of Union Square Hospitality Group in New York City.

Shake Shack's burgers are made from a proprietary blend of all-natural Angus beef, per the company's website. All burgers are cooked medium unless otherwise requested and served on a non-GMO Martin's potato roll.  The signature "ShackBurger" is a single or double cheeseburger with lettuce, tomato and "ShackSauce."

Ingredients are carefully sourced at Shake Shack. The beef is hormone- and antibiotic-free, vegetarian fed, humanely raised and source verified; the chicken, cage-free; and the frozen custard made with milk from dairy farmers who "pledge not to use artificial growth hormones," the website states.

The Palo Alto location will also have some "exclusive" menu items, said Kristyn Clark, senior manager of brand communications for Shake Shack. The chain plans to work with local purveyors to develop them.

It will be "reminiscent of our original Shack in NYC's Madison Square Park," she said.

Shake Shack will enter a crowded burger landscape in Palo Alto, with Gott's Roadside, Kirk's Steakburgers, Wahlburgers, Umami Burger and The Counter all close by -- not to mention two In-N-Out locations in Mountain View.

Check out renderings of the Palo Alto restaurant below, courtesy of Shake Shack:

I've had some duds (notably the Shake Shack in Leicester Square, London) but having eaten at SS in twenty cities around the world, I say this is great news for SS fans in the Bay Area. Burgers are arguably tastier than In n' Out. I found it interesting that Palo Alto is mentioned in the same breath as Marin and the Marina district of SF. And I'm sure the lines will be horrendous for the first few weeks after opening.

Report Objectionable Content
Posted by charles reilly, a resident of another community,
on Jan 17, 2018 at 5:25 am


I like this blog because it offers articles (not reviews) on a diverse variety of restaurant types; appealing to different kinds of folks with different tastes. Running a restaurant looks easy and the industry is, ironically, misunderstood by the vast majority of it's customers. For the most part, restaurants are small business and it's great that The Almanac supports and publicizes them.


I sure hope they offer a veggie option like " impossible foods" plant based burger that sells out by noon everyday at Whole Foods..otherwise won't be eating at yet another meat centric restaurant...

Report Objectionable Content
Posted by At least, a resident of Charleston Gardens,
on Jan 17, 2018 at 4:03 pm


Oh gee, another burger joint ... however, this one seems to have some parking, at least.


Rebecca, if you'd read the article you would have noticed that Shake Shack offers a vegetarian portobello mushroom burger.

Report Objectionable Content
Posted by @Dorthy, a resident of Another Mountain View Neighborhood,
on Jan 18, 2018 at 11:25 am


I think she was much more interested in telling everyone she decided not to eat meat.
Q: How can you tell if someone is a vegetarian?
A: Don't worry, they'll tell you.
(Same joke for rescue dog owners, haha)

Report Objectionable Content
Posted by Meat, a resident of Duveneck/St. Francis,
on Jan 18, 2018 at 11:26 am
Meat is a registered user.


@ Rebecca, I'm not sure you're in Shake Shack's target market group, just as people wanting a burger will most likely not end up at Veggie Grill, or some other vegetable-centric restaurant

Report Objectionable Content
Posted by now you did it, rebecca, a resident of Charleston Gardens,
on Jan 18, 2018 at 12:28 pm


"otherwise won't be eating at yet another meat centric restaurant.."

Report Objectionable Content
Posted by non-vegetarian, a resident of Adobe-Meadow,
on Jan 18, 2018 at 1:09 pm


I have friends who are vegetarian and others who are meat eaters and want to meet for a meal. It is good to be able to find a place that will suit both. Most meat eaters are just as unlikely to pick a vegetarian restaurant as a vegetarian choosing a burger place by choice.

This sounds like a great compromise for friends who want both.

Report Objectionable Content
Posted by Dunkelman, a resident of Rengstorff Park,
on Jan 18, 2018 at 3:42 pm


Is it intentional to omit mentioning Habit Burger in this article? Habit Burger serves great food. Tempura Beans is out of the world experience and their shakes are so good even for a lactose intolerant person like me. Who can match their sushi grade grilled Albacore Tuna ? THey are located in Sunnyvale and I consider Habit Burger to be a great place to eat a really healthy and tasty food.


What are their hours, and is is safe to assume the shakes will be the best hence Shake Shack,

Since you went into such detail about everything else,
non-gmo, cage free, no antibiotics, local, this and that,

please describe in detail the shakes, I'm getting hungry, my guess is something similar to the Creamery,

somebody mentioned parking, brilliant, non of which exists in p.a.

Report Objectionable Content
Posted by Reader, a resident of another community,
on Jan 19, 2018 at 10:14 am

The Habit Burger omission was probably an oversight.

Why don't you just visit the Shake Shack website and view the shakes yourself? As for the hours, who knows? They aren't open yet.


Report Objectionable Content
Posted by Elena Kadvany, education reporter of the Palo Alto Weekly,
on Jan 19, 2018 at 10:24 am
Elena Kadvany is a registered user.

Down home cookin: Hours are not available yet, but other locations are open from 11 a.m. to about 10 p.m. daily, and some until 11 or 11:30 p.m. on weekends. Other locations serve hand-spun vanilla, chocolate, caramel, black and white, strawberry, peanut butter and coffee milkshakes.

Report Objectionable Content
Posted by Reader, a resident of another community,
on Jan 19, 2018 at 10:36 am


As for parking, I don't know why people are complaining.

Apart from the holiday shopping season in late November/December, it is not difficult to find parking at Stanford Shopping Center.

Moreover, this location is well served by public transit, both VTA buses and Caltrain.

Report Objectionable Content
Posted by Reader, a resident of another community,
on Jan 19, 2018 at 10:45 am

"I found it interesting that Palo Alto is mentioned in the same breath as Marin and the Marina district of SF."

Why is that? The press release primarily discusses the upcoming Palo Alto opening because it is actually happening. The company is eyeing sites in Marin and the Marina district, but no formal announcement has been made.

There's nothing unusual about a big corporate chain saying that they interested in opening in ____ location.

Report Objectionable Content
Posted by resident, a resident of Adobe-Meadow,
on Jan 20, 2018 at 11:08 am


Glad to see SS coming to town. I am a great fan of the Union Square Hospitality Group that has major restaurants in New York and now elsewhere. SS is part of their restaurant group. Danny Meyer, CEO has a great book out called "Setting the Table - The Transforming Power of Hospitality in Business". This book points to what works and what does not work.

Report Objectionable Content
Posted by Sooo many good burgers, a resident of Another Mountain View Neighborhood,
on Jan 22, 2018 at 8:58 am


So few really stellar fries and onion rings. The latter is especially true. With the burgers being pretty good across the board, I tend go to where the fries are best. Personally, I think you simply can't beat 5 Guys fries.

Report Objectionable Content
Posted by resident, a resident of Adobe-Meadow,
on Jan 22, 2018 at 6:46 pm


I will check out Wallburgers tomorrow. I have watched their show on A&E as they build the business.

Report Objectionable Content
Posted by Cheeseguy, a resident of Palo Verde,
on Jan 23, 2018 at 7:24 am


It further reinforces the recognition that one is in the culinary wasteland of Palo Alto when great excitement is shown for the opening of a burger chain.

Report Objectionable Content
Posted by @Cheeseguy, a resident of Another Mountain View Neighborhood,
on Jan 23, 2018 at 9:20 am


I completely disagree. It shows an ability to find joy in all areas of the food spectrum. I know there are those who feel arrogance equates with expertise. For whatever reason you see it a lot in the culinary arena, wine especially, but life's joys can be found in both the "Mundane" as well as the "Flashy" if you allow yourself to experience it. Give it a shot, there's nothing to lose really.
Peace.

Can the Memphis police behavior ever happen here?
By Diana Diamond | 40 comments | 2,355 views