Uploaded: Mar 24, 2018
Protégé, a highly-anticipated restaurant from two alums of The French Laundry, quietly opened its doors this week in Palo Alto.

For now, Protégé is open at 250 California Ave. only for dinner and with limited, first-come first-serve seating. The restaurant's hours are 5:30-9:30 p.m. Tuesday-Thursday and 5:30-10 p.m. on Friday and Saturday, per the Protégé website.

Co-owner Dennis Kelly said on Tuesday, March 27, that the restaurant is now taking a limited number of reservations online. 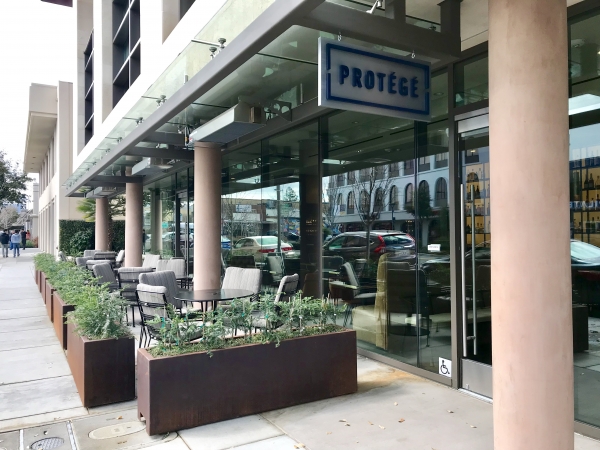 The exterior of Protégé Restaurant on California Avenue. Photo by Elena Kadvany.

Protégé has been a long time coming for Kelly and co-owner Anthony Secviar, a former sommelier and chef, respectively, from the three-Michelin-star The French Laundry in Yountville. They conceived of the restaurant several years ago and entered a protracted city-permitting process to open in Palo Alto more than a year and a half ago.

Kelly and Secviar have described Protégé as an "approachable" neighborhood restaurant that will serve a burger and crispy chicken sandwich in a casual lounge but also have a more formal, reservations-only dining room with a hybrid prix-fixe menu that starts at $55 per person. Diners can choose to have two, three or four courses. 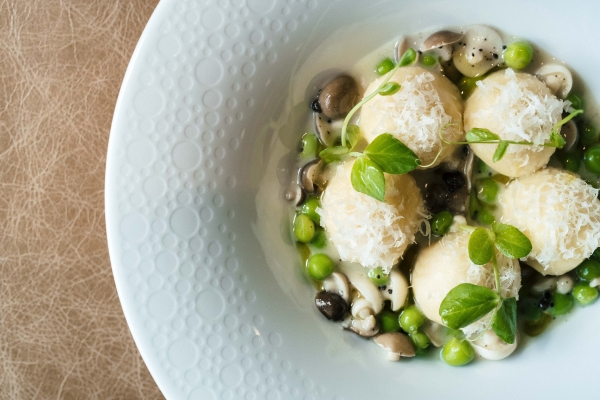 Ricotta dumplings with English peas, beech mushrooms and black truffle are on the menu at the newly opened Protégé in Palo Alto. Photo courtesy Protégé.

Photos posted by the restaurant on Yelp show dishes such as a little gem salad with avocado, radish and puffed quinoa; oysters on the half shell; sablefish with asparagus, dashi butter and crispy koshihkari rice; and a whole Cornish game hen served with saffron rice and sweet peppers, among others. 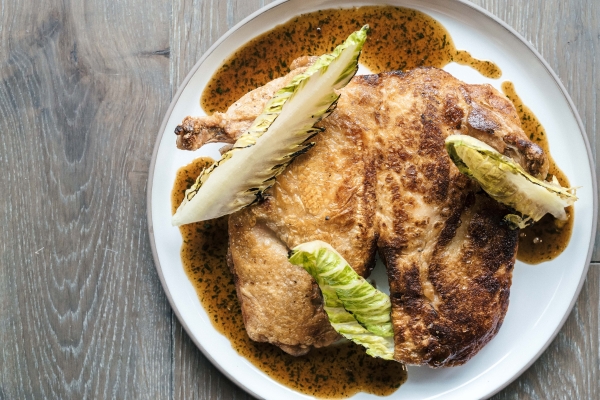 Protégé has a full bar and wine cellar with room for 2,200 bottles.

Secviar was sous chef at The French Laundry for six years and most recently worked as chef de cuisine at Addison, a San Diego fine-dining restaurant. Kelly, who is one of 236 people in the world to earn the title of "master sommelier," worked at The French Laundry as captain and head sommelier for more than a decade.

Eddie Lopez is overseeing pastry and desserts, including a custom-built trolley with rotating, daily pies and other desserts. (For a visual, check out a post from food writer Carolyn Jung here). Lopez previously worked at The French Laundry, acclaimed Chicago restaurant Grace and The Vintage Cave in Honolulu, Hawaii.

I'm so looking forward to this. A 10 minute walk from my house.

Report Objectionable Content
Posted by Stew Pid, a resident of Community Center,
on Mar 27, 2018 at 1:46 pm


Hope this isn't one of those micro-gastronomy places from which you come out hungry and head for McDonald's.


Neighbors, my son and I ate in the lounge area (the casual dining area by the bar) and the food was amazing! My son had the short rib dish, and I had the above-mentioned brick chicken. We were treated like kings by the staff, and the food was beautiful to look at and even better to taste. I do not know of any other restaurant in the area that has a selection of French wines like this place. If you are a fan of French wines, this place can be your Disneyland. I only had one glass, but it was delicious. For a new restaurant that is just starting, I would give this place an A+.

Report Objectionable Content
Posted by Nader, a resident of Another Mountain View Neighborhood,
on Apr 13, 2018 at 10:58 pm

Report Objectionable Content
Posted by Nader, a resident of Another Mountain View Neighborhood,
on Apr 13, 2018 at 10:58 pm

Report Objectionable Content
Posted by Nikki W., a resident of Portola Valley,
on Apr 23, 2018 at 2:10 pm
Nikki W. is a registered user.


I've had the pleasure of dining at The French Laundry in Yountville. I hope the menu is similar in style. I especially enjoyed the grilled Japanese wagyu beef and the amazing deserts.

This barbecue business was kicked out of Belmont. Now it's a Sunday fixture in Redwood City.
By The Peninsula Foodist | 2 comments | 4,736 views

Can the Memphis police behavior ever happen here?
By Diana Diamond | 29 comments | 1,637 views