For three years Nuseir Yassin (a.k.a NAS), an Arab Israeli and Harvard grad, has toured the nooks and crannies of the world producing a 60-second daily video (Nas Daily) of his travels. Fascinating and informative stuff. Places and people you’ve never seen. He embarked on doing 1000 editions, and is now in the final 100-day stretch.

Welcome to District Elections: A solution in search of a problem to solve

This is the first of a two-part post. This first part provides background on issues. The second part will be my recommendations for council

A. Trying out district elections:

For better or worse, we now have geographic elections for each of our five council members. This year, we will be electing council members in three districts: District 1: Belle Haven / East Side; District 2: The Willows; and District 4: Downtown Menlo Park. In two years, the other two seats District 3 (roughly North of Alma to Middlefield, and District 5 (far west side) will be filled.

This is a golden opportunity for much needed change and new spirit. Replace the fuddy-duddies with next year’s models.

The council selections are very important as Districts 1 and 2 host the on-ramps and off-ramps connected to Highway 101. The traffic that flows through those districts affects all of Menlo Park.

District elections will result in council members who eat their own cooking, so to speak; who live in the areas affected by council directions. It will be more difficult to get multiple council members with a particular bias. This ‘balkanization’ was a cited risk of district elections. Another observation is that the amount of money needed to campaign is much less than when running across the entire city. When considering the amount of donations for a candidate this year, excessive donations may be a tip-off to future campaigns for that person down stream.

My comments on the 2016 Council election, including my prior endorsement of Cecilia Taylor, and a summary of major issues, is here:

The chronic issues and complaints of past years remain: traffic, cost of housing. Red-light cameras and privacy, strengthening the Sales Tax base.

• Ambiguous and surprise foreign travel, and its image and message, and impact on conducting council meetings either by absence or poor phone connections. The question of who is paying is not necessarily a simple one. For example someone may pay their AMEX bill, but someone else is reimbursing that expense.

Recently Catherine Carlton has started appearing at specialized tech conferences in Europe and Tel Aviv that I also attend. This is part of my business development and tending to clients, and I pay for these jaunts myself. I suspect that she is being invited due to a ‘Menlo Park’ branding (and a better smile than mine). Cat is now a member of the same international circle of well-connected, interesting people who relish a few days talking with each other. I wouldn't be surprised if Cat travels to Davos this January. 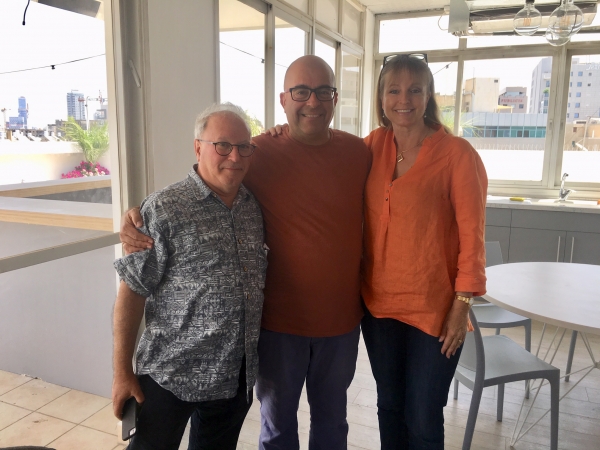 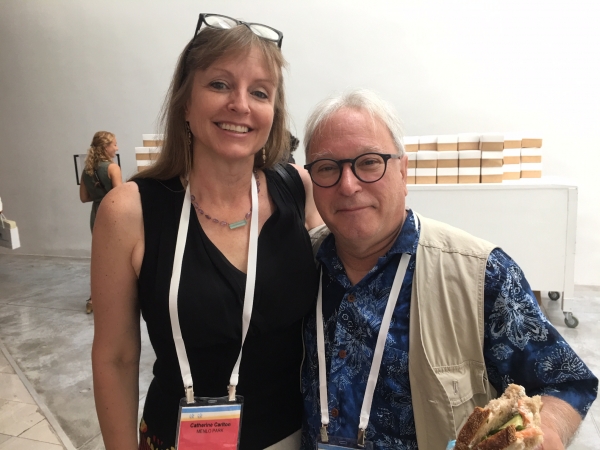 I'm the one with the sandwich.
Tel Aviv Cities Summit. September 2018

I realized this week that many ills are consequence of city governance.

Third terms are not an entitlement earned for enduring two terms.
As an initial filter of the candidates, which I’ll disclose in another post, I exclude those seeking a third term. Former council members who have had enjoyed third terms have told me that they ultimately hated it - and they felt trapped. In 2014, I said the same about Rich Cline’s run for a third term, and in an earlier blog post:

“Usually when one desires to punish council members you remove them from office. In Rich's case the punishment is to serve a third term. You asked for it, big guy.” (Here: )

I repeated the sentiment earlier this year while the council was considering several structural city charter modifications: “Third terms on council seems to be torment for the incumbents - where they lose interest and energy. There are enough residents around to partake in city governance - and a third term creates a barrier to entry for public participation." Here.

After that election Rich sent me a handwritten note thanking me for the best line of the election. Got to have a sense of humor.

The problem of third terms in Menlo Park is that they ossify opinion, biases, directions and poor decisions; it precludes new deliberative chemistries.

When was the last time you heard a council member saying that they made a mistake?

We only need to see how we incrementally hurt ourselves when approving projects, as explained in editorial by the Palo Alto Weekly a year ago:

“The sad reality is that Facebook's development plans, combined with the large office and hotel developments under construction in the same area by the Bohannon Development Company, will only put the region's housing market under greater pressure. Adding 10,000 jobs and 1,500 apartment units means that Facebook alone could have as many as 7,000 new (and highly paid) employees competing for places to live on the Peninsula or elsewhere, adding to the already horrendous commute situation.
…
Menlo Park city officials, including Mayor Kirsten Keith, who express delight at Facebook's proposal and explain this is just what the city had in mind when it approved its new general plan last year, do a disservice to their constituents and to the region.”

Our incumbents running for reelection, and other council members who voted with them, own dysfunctional planning. For the above reasons and more, it’s time for incumbents to yield their seats to new energy and insights. Thank you for your service.

We need new perspectives and personalities on the council.

And we also need new perspectives and personality in a City Manager. Alex McIntyre’s departure presents another Golden Opportunity. I’ve been in MP 24 years. I don’t believe the argument that the incumbents’ experience is necessary at this juncture for selecting a successor city manager. Not so.

There’s scuttlebutt on bringing back David Boesch whom I always liked. But from within, I’d like to see Public Works Director Justin Murphy as City Manager: Harvard Kennedy School trained, lives and sends his kids to school in Menlo Park. He has held several managerial positions including Planning. And I have also suggested in the past former Chief Bob Jonsen (much to his chagrin).

Deficiencies in the past 4 years:

It’s the role of the City Council to give direction to the City Manager, who in turn manages the various departments through assistant city managers. Sometimes the deficiencies are glaring, as when the outside financial auditors reported several basic errors in process.


D. Links to my past posts addressing some of the topics

Finally, here is a reference to my prior posts that address various topics involving council.

a) Regarding red light cams “Policing for Profit Scheme”

Bifurcate discussions and voting to occur on different weeks https://www.almanacnews.com/blogs/p/2017/11/27/can-council-meetings-be-more-efficient-andor-more-fair

Ray Mueller asks for sunshine policies, like staff meetings with outside interests, https://www.almanacnews.com/blogs/p/2017/04/11/councilmember-mueller-asks-for-more-sunshine

+  Like this comment
Posted by Timmy, a resident of Menlo Park: Suburban Park/Lorelei Manor/Flood Park Triangle,
on Oct 1, 2018 at 3:29 pm

As a homeowner I say to Facebook “Bring it on!" I don't live under the delusion that one of the most vibrant economic areas on the planet (Silocon Valley) is going to stand still for one minute. It's like buying a house between two airports and complaining about the planes. My home value has grown in an unbelievable way, and, as the biggest investment I will make in my lifetime, I want it to keep growing. I hear a lot of people moaning about the high prices but I haven't heard of one person cutting the sale of their home in half to sell it to a teacher or fire fighter. I feel for the non-professional workers who are priced out, but I moved across the country to a city best suited for my profession. There's no entitlement to live here, plenty of places in the country where someone with a blue collar salary can thrive. So yes, bring on those developments. I;ve got another 10 years before I cash out.


* Apologies for the typos above. An edit feature would be a normal thing to do.


Stu, this installment of Deep Menlo is very difficult to follow and is filled with broken links. In this article, you write, "The Almanac's words; not mine," when referencing a Palo Alto Weekly editorial. You won't be able to fact check Bill Johnson's statement that officials "express delight at Facebook's proposal," Keith's reaction at the time was critical of the traffic impacts. Web Link

Report Objectionable Content
+   3 people like this
Posted by KicksOn66, a resident of another community,
on Oct 3, 2018 at 12:49 am
KicksOn66 is a registered user.


The Oct. 9 MP council meeting may include a staff item recommending the extension of the camera program for more years. Staff needs to explain why the red light cam ticketing jumped in May 2018, to the highest since Jan. 2009, and in June, July and August 2018 it was higher yet. The ticketing seen in May - August: A. Was 66% higher than the ticketing seen in January - April 2018. B. Was 55% higher than the average ticketing seen in May - August of 2016 and May - August of 2017. C. If continued through December 2018 will produce 8107 tickets in 2018, 37% higher than in 2017. D. If continued in 2019 will produce 9351 tickets by the end of that year, 58% higher than in 2017. A possible explanation of why the ticketing went up is this March 15 email from MPPD Commander William Dixon to Traffic Sergeant Scott Mackdanz: "According to the current budget information our Redflex numbers are way down year to date. I'm trying to determine if this is due to one installation being lower than the rest or if the lower numbers are across the board. "Please have Deborah contact Redflex and get a fiscal year (16/17 vs 17/18) to date comparison of each installation. "Thanks "Commander William A. Dixon" The email above, and the ticketing figures, were obtained legally, via a public records request submitted by highwayrobbery [dot] net.

"It's too little too late" and other reasons why not
By Sherry Listgarten | 12 comments | 3,506 views