The opening comes two years after the international bakery chain took over the former longtime home of used bookstore BookBuyers. It's a large space, with ample seating and a long glass case of pastries and baked goods— croissants, danishes, tarts, bread and more — lining the left wall as you enter the bakery. Paris Baguette also serves sandwiches, salads, soups and breakfast dishes. 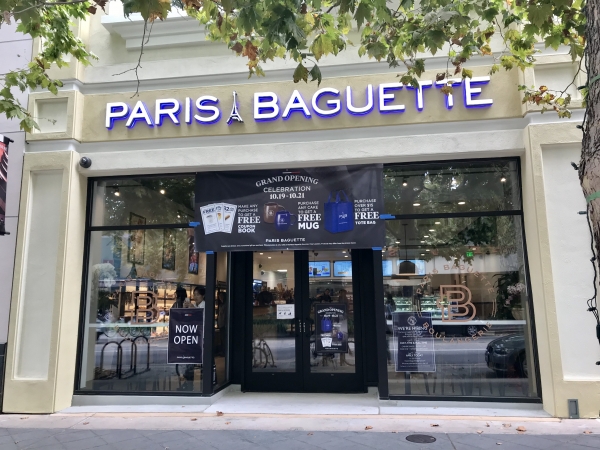 Paris Baguette, which was started in the late 1980s by a Korean pastry chef trained in France, has thousands of locations and franchises worldwide. There are local outposts nearby, including in Palo Alto and Santa Clara.

In 2017, Paris Baguette Chief Development Officer Larry Sidoti described the Mountain View location as a "showstopper" that would anchor further expansion in the South Bay.

While the Mountain View location is in a soft-opening phase, the bakery will open at 9 a.m. daily. These hours will last until Thursday, Oct. 18.

There will be a grand opening event on Oct. 19-21, with free gifts with specific purchases.

I wish 85 Degrees would come to MV/PA. Cheaper and better than Paris Baguette.

Report Objectionable Content
+   3 people like this
Posted by Bakery Nut, a resident of Menlo Park: Allied Arts/Stanford Park,
on Oct 2, 2018 at 6:58 pm


I just hoped to get a high quality bakery with reasonable prices in Mountain View. Instead we got a mediocre bakery with ok prices.

Report Objectionable Content
+   5 people like this
Posted by Positive Input, a resident of Mountain View,
on Oct 6, 2018 at 3:18 am


I didn't realize that Paris Baguette does lunch and sandwiches and makes everything on site. I tried a hotdog baked in a dough wrap dabbled with ketchup and mustard and it had a very nice flavor. Only cost $3.35 Don't know how they can even make money at that. I think they have great prices and so far like the pastries I've tried and the egg sandwich. Don't know what people are complaining about.

Report Objectionable Content
+   8 people like this
Posted by Positive Thanks, a resident of Mountain View,
on Oct 6, 2018 at 9:09 am


They are complaining because it is customary. The population that posts comments on these blog pages (usually under pseudonyms) self-selects, way out of proportionality to the average reader, to favor grumbling or minor complaints. Preferably about businesses the writer hasn't even tried.

I welcome more options. There now are six bakeries on Castro St., where for a long time there were two. If you don't like one of them, try others. Vote with your pocketbook.

Report Objectionable Content
+   6 people like this
Posted by SF Sourdough Is Real/Others Fake, a resident of Los Altos,
on Oct 6, 2018 at 3:03 pm


> Vote with your pocketbook.

Vote with your taste buds while taking texture into full consideration. It's very difficult to make high-quality regional breads at any one given location.

Which is why: (1) The bagels are crappy around here. They're just bread with a hole in the center. You have to go to NY/Brooklyn for that natural chewy texture and a true bagel get as hard as a rock after one day. (2) For a genuine Philly Cheese Steak, go to Philly. Anyone can simulate the meat/cheese filling but the bread texture always falls short due to the different water used in the Philadelphia-based dough. (3) Besides, you wouldn't buy 'authentically baked' San Francisco Sourdough in Alabama now would you? (4) The same can be said of the various French provincial breads being offered locally. Variances in regional water makes a major difference.

You want the real deal? Go buy an airline ticket.


I do not buy much in Paris Baguette, but I regularly buy the chocolate cake (in Stanford location). Almost no dough and a lot of chocolate creme, very tasty. I would say it is my favorite cake here in Bay Area.


I've found their stuff to be visually appealing but a let-down once I taste it. Not worth the calories or price just for the "Meh".

Report Objectionable Content
+   1 person likes this
Posted by pogo, a resident of Woodside: other,
on Oct 9, 2018 at 2:23 pm
pogo is a registered user.


Positive Thanks - SPOT ON.

Dating/Dating Profile: Say What You Are Looking For
By Chandrama Anderson | 0 comments | 1,958 views