Hitoshi Tagawa soft opened Ranzan, his first-ever restaurant, in late August and is continuing to serve limited menus on a reservations-only basis until a grand opening in January. 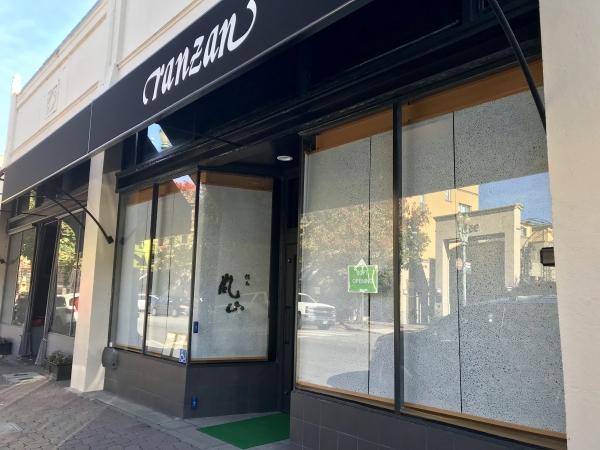 Ranzan serves kaiseki, elaborate meals with as many as 16 courses. Photo by Elena Kadvany.

Tagawa was born in Japan but raised on the East Coast. He returned to Japan as an adult for six years of culinary training near Kobe, he said in an interview.

He decided to open a kaiseki restaurant because it "incorporates every aspect of Japanese food" — sashimi, soup, fried fish, something grilled, something steamed, delicacies and dessert. The menus are driven by the seasons in Japan.

"Our concept is to show everybody Japanese culture through Japanese food," Tagawa said.

For dinner at Ranzan, there are three tiers of kaiseki, each named for a location in Japan. "Ohara" is a 13-course meal for $128; "Kibune," 15 courses for $158; and "Takao," 16 courses for $188. The courses include vegetables, soup, sashimi, rice and dishes that exemplify different cooking methods (simmered, grilled, steamed, fried, pickled). Photos posted on Yelp show dishes like steamed Japanese squash, monk liver in ponzu sauce, cured sea bream and duck breast simmered in dashi.

The two latter dinner menus include a rotating "luxury" dish, Tagawa said, which right now is shikaro, the sperm of a cod fish. He salts and then grills it.

"It's creamy, velvety with a lot of umami," he said.

For lunch, Ranzan offers three pared-down options. Tenose sushi ($48) allows customers to roll their own sushi from 12 different ingredients. Ichi jyu San sai comes with one soup, one main and two supplemental dishes. Shoukado is "an elegant way of saying bento box," with dishes that are simmered, grilled, steamed, fried and/or sashimi, the Ranzan website states.

The restaurant's name was inspired by the Japanese characters for Arashiyama, a popular destination near Kyoto were Tagawa's business partner first ate kaiseki as a young boy, Tagawa said. The partner, who did not want to be named, went on to open several kaiseki restaurants in Japan.

The Nut House is back -- with a self-taught chef and Palo Alto native in the kitchen
By Elena Kadvany | 19 comments | 7,514 views

Public statues: Up or down? But does the historical importance of the individuals represented matter?
By Diana Diamond | 42 comments | 4,334 views

Stay Together or End the Relationship? Independence or Interdependence?
By Chandrama Anderson | 0 comments | 2,137 views