The udon shop and izakaya, which will open to the public at Stanford Shopping Center next week, will serve three types of fresh udon noodles custom made on a specialty machine from Japan.

Beyond a traditional beef udon, the noodles will be served in non-traditional ways: one with a ramen-like chicken paitan broth and another a vegan broth made from shiitake stock, vegetable stock and different types of miso. Tsukemen, traditionally served with ramen noodles and a dipping broth, will instead come with the restaurant's udon, duck breast and a rich fish dipping broth. Down the line, Taro San will serve a pasta-like dish with udon and uni and a chili crab udon inspired by the Singaporean dish. 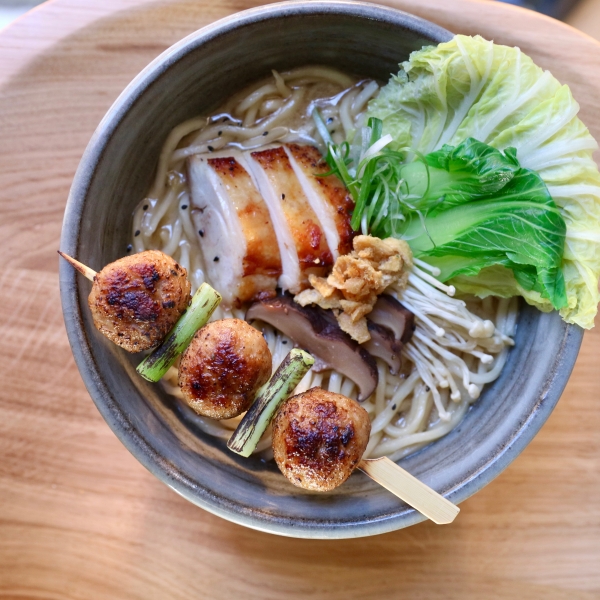 "Udon has a misconception," Ito said in an interview at the restaurant Wednesday. "People think of it as one type of noodle" that can only go with one type of broth.

With udon, he said, "there's no right or wrong."

Taro San Japanese Noodle Bar is a long time coming for Ito, a former sushi chef who runs Go Fish Poke Bar, a string of fast-casual poke restaurants on the Peninsula. He took over a long-vacant space (formerly occupied by Babbo's Restaurant, which closed in 2013) at Stanford Shopping Center last year and with his wife, designed Taro San from the ground up. He traveled to Japan and Singapore to train on the special noodle-making machine and crafted three noodles of varying thickness to serve at Taro San.

Taro San is holding limited soft openings this week and will open to the public on Saturday, Jan. 12. (To land a soft-opening invite before then, sign up for Taro San's email list.) 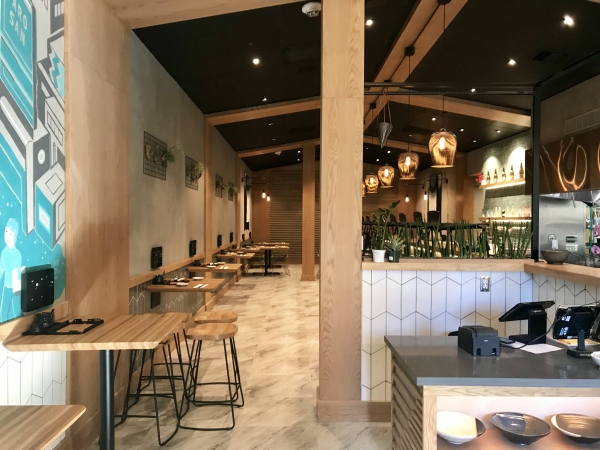 The 45-seat restaurant is open, with aesthetics inspired by Japan, Ito said. Immediately to the right as you enter Taro San are three large machines brought from Japan: the noodle-making machine, next to a refrigerator-like machine for storing the dough and a boiler for cooking the noodles. Once the restaurant is fully up and running, all three noodle sizes will be available, from a thin version akin to soba to the thickest, chewiest noodle. The thinnest noodles will only be served cold, as they would overcook in hot broths, Ito said. Taro San's udon is more delicate and flatter than is typical, Ito said.

The kitchen is open so diners can watch the udon-making process. Bar seating lines the kitchen, akin to a sushi bar.

On the left side of the restaurant's entrance is a whimsical, blue-toned mural by San Francisco artist Nigel Sussman. It depicts the streets of Tokyo and Osaka, with landmarks that have inspired Ito (including a large crab from Kani Doraku, a restaurant known for the giant, mechanical red crab attached above its doors). 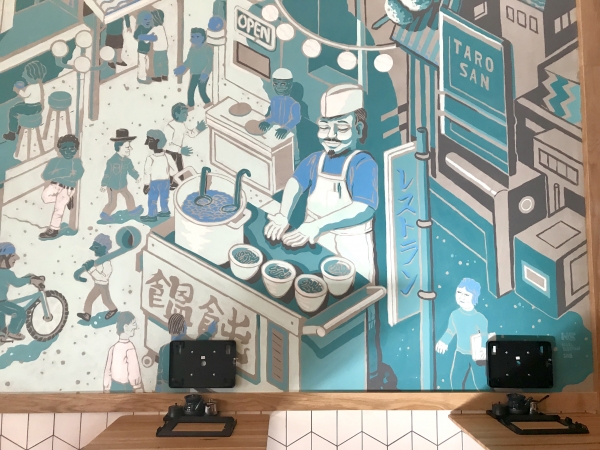 A mural of Japanese landmarks in the entryway to Taro San. Photo by Elena Kadvany.

The tables are equipped with iPads, inspired by the efficiency of Japanese vending machines. Wait staff will still provide service, but diners will place orders on the iPads to expedite the ordering process.

The menu includes several shareable appetizers that mix tradition and spin, like ebi fry, or fried whole shrimp, served with Ito's tartar sauce (made from mostly Japanese ingredients) and a play on poke made with fried and soft tofu as well as inari (fried tofu skin wrapped around sushi rice). 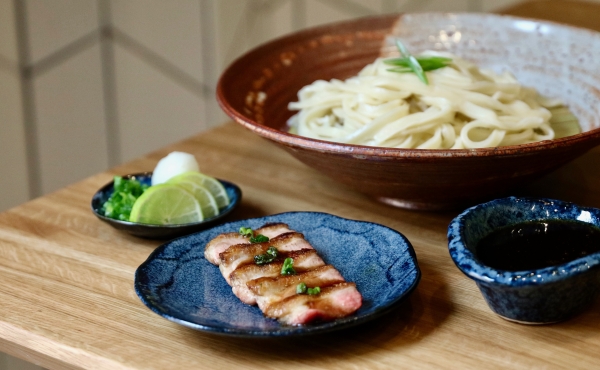 The udon will be served in custom ceramic bowls made by a Japanese couple in Milpitas. Ito and his wife brought other dishware in suitcases back from visits to Japan.

For dessert, there's a mochi donut created by Ito's wife. Taro San will serve beer and wine. The restaurant will also sell its fresh udon noodles to cook at home.

The menu will change seasonally. Ito hopes to ramp up to the full menu and hours within two weeks. The full menu will include more sashimi and some limited sushi, Ito said.

Lunch and dinner will eventually be different menus, with lunch geared toward meal sets that can be made quickly and serve a single person.

This will be Ito's first Taro San, but it won't be the last. The large noodle-making machine can handle the operations of multiple restaurants, Ito said. Future Taro San locations won't be exactly like the Palo Alto flagship, however; he envisions spinoffs "with udon being the foundation," like a smaller restaurant that only serves udon or a late-night noodle shop.

The restaurant is named for Ito's three children ("san" means three in Japanese): his two sons who each have "taro" in their middle names, after their father's middle name "Shintaro," and his 3-year-old daughter who loves noodles.

After the weekend of Jan. 12, Taro San's full hours will be Monday-Saturday, 11 a.m. to 9 p.m. and Sunday 11 a.m. to 8 p.m. The restaurant is located between Cocola Bakery and Brava, across from Sigona's Farmers Market.

This is a nice thing for the Stanford Shopping Center! There was a need for culinary variation.

Report Objectionable Content
Posted by ChrisC, a resident of College Terrace,
on Jan 3, 2019 at 6:05 pm
ChrisC is a registered user.

Report Objectionable Content
Posted by resident, a resident of Another Mountain View Neighborhood,
on Jan 4, 2019 at 12:47 pm

Report Objectionable Content
Posted by Just Back From Narita, a resident of College Terrace,
on Jan 5, 2019 at 3:12 pm


Good money to be made in Udon and Pho shops. Ingredients relatively inexpensive and the main broth is already pre-made and simmering on the stove. Simple assemblage completes the task.

Those who have been to Japan will scrutinize this new restaurant in terms of its authenticity and presentation.

Report Objectionable Content
Posted by Noodle Guy, a resident of Another Mountain View Neighborhood,
on Jan 5, 2019 at 4:17 pm


Since restaurant prices in Japan include service and taxes, the price here for a bowl of soup should *NOT* be more than $8. The typical local price is 1000 yen which works to be about $9.20 at current exchange rates.

Tokyo is one expensive place so I don't understand why the SF Bay Area restaurants have any justification in charging more than those in Tokyo.

My main interest in this restaurant is the availability of fresh noodles to take home and cook. I might buy some if the price is right.

Report Objectionable Content
Posted by R.Davis, a resident of Crescent Park,
on Jan 5, 2019 at 5:53 pm
R.Davis is a registered user.


QUOTE: Prices about right (for Palo Alto) as no one should have to pay more for a bowl of soup than say, $9.00-$10.00 at the most.
QUOTE: Since restaurant prices in Japan include service and taxes, the price here for a bowl of soup should *NOT* be more than $8. The typical local price is 1000 yen which works to be about $9.20 at current exchange rates.
QUOTE: Tokyo is one expensive place so I don't understand why the SF Bay Area restaurants have any justification in charging more than those in Tokyo.

That's because many Bay Area diners don't know any better & have money to burn towards foreign cuisine they feel is 'exotic'...which udon certainly is not.

It's laughable but hey, it's their money & insecure bragging rights.


Report Objectionable Content
Posted by resident, a resident of Another Mountain View Neighborhood,
on Jan 6, 2019 at 9:51 am


If you're looking for cheap udon, try Marugame in the Stonestown shopping center in San Francisco, which also uses freshly made noodles from their own noodle-making machine. Price there start at $4.50. However, their udon doesn't look anything like the photo in this article. Their cheap dishes are just noodles and broth with no meat and their fancier dishes have prices similar to this place, but still don't look as good as this photo.


Ur all too funny, "Too uncomfortable" (too loud too): showing your age
Anyone knows that the best margins are selling beer and pizza.
Someone else's budget(discretionary income) is not yours. Too relative to compare.


I love noodle, however, not looking forward to the long long line!!

Doing more with the natural spaces we have
By Sherry Listgarten | 6 comments | 2,609 views

Can the Memphis police behavior ever happen here?
By Diana Diamond | 0 comments | 93 views