No One Wants A Train Viaduct Overshadowing Their Backyard

Uploaded: Jan 21, 2019
So why bring up this subject? Because for years a small, well-organized neighborhood group of vocal Menlo Park residents has persistently and heatedly claimed a grade separation alternative that elevates Caltrain tracks without lowering streets requires a viaduct that would destroy the quality of their “home life” and the values of their property. Regrettably, they are NOT well-informed. No one has ever proposed a viaduct be built near any Menlo Park residential neighborhood either north of Glenwood or south of Ravenswood but this fact did not matter to the opponents of fully elevated grade separations (FEGS). Their drumbeats would not be silenced.

So what has happened? Although the city council strongly disliked two studied alternatives, in October 2017 it reluctantly selected the one most members viewed as the least undesirable. This design (Alternative C) builds grade separations at Ravenswood, Oak Grove and Glenwood and requires lowered streets AND elevated tracks. Three grade separations were viewed as essential despite much higher construction costs and much longer lane and street closures than the other alternative. (Note: a large majority of residents strongly favored Alternative C during earlier official public workshops.) Then in May 2018, the council abruptly changed its mind and switched to Alternative A, the design that builds only a Ravenswood underpass. What changed? The projected negative impacts of construction on our entire community had finally sunk in. At the same meeting, the council finally (but unenthusiastically) agreed to consider a study of the FEGS alternative and instructed city staff to work with the consultant AECOM to develop a funding proposal. EIGHT months later (December 2018) staff published a draft scope for the study with unexpected design constraints so stringent that an acceptable FEGS solution would not be possible. No one has explained how this happened. 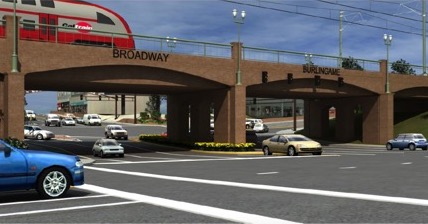 Fortunately, there are many good reasons for our entire community to be cautiously optimistic about the future planning of grade separations in Menlo Park.

1. This month the city council decided three grade separations are needed – that means Alternative C, at least for now.

2. All the new council members have expressed a genuine interest in understanding the FEGS alternative.

3. The new mayor has consistently demonstrated his strong commitment to rational decision-making and sound planning processes while on the city council.

4. The recently recruited Assistant Public Works Director for the Transportation Division should be highly motivated to ensure a Menlo Park FEGS study is well-designed and professionally conducted.

5. The FEGS study LIKELY will show this option is a far superior solution.

I will explain why in my next grade separation post.

This is the second in a series of posts about the on-going planning for future grade separations in Menlo Park. The first can be viewed at https://www.almanacnews.com/blogs/p/2018/12/20/who-will-you-blame-for-the-coming-menlo-park-disaster


Dana - Thanks for this thoughtful posting.


Dana, based on a conversation with one person, your headline, "No one wants a train viaduct overshadowing the backyard," is wrong. I spoke to a woman living right next to the tracks. She has no problem with the tracks being fully elevated; she did buy a house right next to the tracks after all. Her main issue is the horns, which will go away with grade separation. She also doesn't care for all the loss of life that happens (right next to her home) when a collision occurs. Also, your description of the previous council meeting is flawed. You say the council was unenthusiastic about consider a study of the FEGS. The council motion was for staff to come back with numbers for the tunnel and FEGS. Staff has never provided council with enough information to vote on those options.

Report Objectionable Content
+   2 people like this
Posted by Dana Hendrickson, a resident of Menlo Park: Central Menlo Park,
on Jan 23, 2019 at 12:00 pm


Options: I and other residents have been asking the City Council for an FEGS study since the summer of 2017, attended the handful of Council reviews on grade separations, and repeatedly presented reasons for a study at most public meetings. We also talked with every council member about the need to conduct this study so the council and all residents would have the facts they DESERVE and NEED. And for mostly political reasons the council was STRONGLY reluctant to do this. Unenthusiastic would be an understatement.

Yes, the council eventually yielded to pressure and in May 2018 agreed to REVIEW a study proposal, a step still not taken after EIGHT months. So, a FEGS study has NOT yet been approved despite the sense of urgency about grade separations the prior council constantly stressed for almost two years.

We can only hope the new city council and Mayor WILL approve a study and soon.


"No one wants a train viaduct overshadowing the backyard"

No one wants another 500 cars on the streets, either.

Separation is a great way to ease traffic, both congestion and delays, as well as train/gate noise.


Thanks you for the nice post, i benefit a lot. Web Link


We can only hope the new city council and Mayor WILL approve a study and soon. Web Link

Report Objectionable Content
+  Like this comment
Posted by dana hendrickson, a resident of Menlo Park: Central Menlo Park,
on Mar 17, 2019 at 12:03 pm
dana hendrickson is a registered user.


options: if the prior Council was so enthusiastic about proceeding with a FEGS study back in May 2018 , why did it allow 2018 to end without seeing a proposal???? The Council and City manager should have displayed a much greater sense of urgency. All the work needed for a proposal was 95% performed by a paid consultant NOT city staff so I do not accept the argument that city staffing problems caused this inexcusable delay.

Sutter and PAMF — protect your patients from coronavirus — not just your employees
By Diana Diamond | 42 comments | 3,752 views

'This is just the beginning': Boichik Bagels opening Peninsula outpost
By The Peninsula Foodist | 3 comments | 2,770 views