“Opponents of the viaduct alternative almost succeeded in getting this option eliminated by the city last year because of widespread but unsubstantiated fears that a viaduct would be ugly and trains running on elevated tracks would create unacceptable noise.” (Editorial, Palo Alto Weekly, February 1, 2019)

Sound familiar? For the past two years, one well-organized neighborhood group has repeatedly mischaracterized and demonized the ”viaduct” grade separation alternative at Menlo Park city council and rail subcommittee meetings. At first, the city council yielded to its pressure and would not study this option. Then last May, proponents of a study persuaded the council to at least consider a study proposal. Eight months later, there is still no proposal, and of course, no approved study.

First, some facts: the fully elevated grade separation (FEGS) alternative would NOT erect an “end-to-end” train viaduct that extends along Felton Gables and Linfield Oaks neighborhoods. Instead, a short fully elevated rail structure (viaduct) would be built only in the downtown commercial district. Like with Alternatives B and C, graduated tracks to the north and south of grade separations would be elevated on berms. But unlike these alternatives, a tall berm would NOT physically and visually divide Menlo Park between Glenwood and Ravenswood. Instead, the viaduct would have a series of tall and wide openings for pedestrian and bicyclist use. 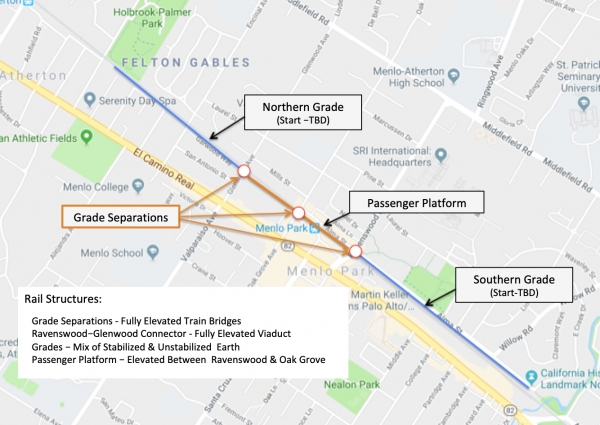 I am one of many residents who support a study of fully elevated grade separations at Ravenswood and Oak Grove, and Glenwood PLUS a fully elevated viaduct that connects them.

• The “up-and-coming” retail/housing/office district in the train station area is a valuable city resource that would be further enhanced by a beautiful civic plaza, a key proposal in the Menlo Park Specific Plan. Therefore, the selected grade separation solution should enhance rather than limit its potential.

• ALL Menlo Park residents deserve the opportunity to understand this alternative and express their well-informed concerns and preferences.

• Our city leaders are responsible for ensuring residents have this opportunity. They must never allow a small vocal minority of residents to undermine this principle. In this case, a neighborhood representing less than 1% of Menlo Park residents has exerted way too much influence on city council decisions affecting our downtown.

• Residents should trust that both our city council and the majority of residents would never support any grade separation alternative that would significantly harm any neighborhood.

No grade separation solution will satisfy everyone, but the city council must select the one preferred by a majority of well-informed residents rather than by an unrepresentative minority. The council members must also set aside their own personal biases. It’s time to conduct a well-designed study of the FEGS alternative. The sooner facts are known, the better for everyone.

(This is the fourth post in a continuing series about planning for future Menlo Park grade separations.)

I attended the last City Council meeting on grade separations to express concern about eliminating the turn/traffic on Alma Street.
During the meeting we heard a lot of talk and saw a few two dimensional photos illustrating alternatives.
What makes this so difficult to understand is that it is really hard to visualize all of this and the two dimensional maps don't help all that much.
With all the technology know how here in Silicon Valley, can't someone create a 3D model or video or other form of simulation so that we can all better picture the viaducts, berms (still not sure how berm is defined) and other structures?
I have some images in my mind and comparisons were made to structures in the industrial parts of Redwood City and San Carlos, but I still do not have a clear idea of what the grade separations will look like.
Help please!

I recommend that you view the presentation and videos shown at the June 7, 2017 Community Meeting.

Here is the link Web Link


I attended the last City Council meeting on grade separations to express concern about eliminating the turn/traffic on Alma Street. Web Link


Great article. Very well explained. Thanks for the share. https://www.psiphon.onl

Sutter and PAMF — protect your patients from coronavirus — not just your employees
By Diana Diamond | 42 comments | 3,753 views

'This is just the beginning': Boichik Bagels opening Peninsula outpost
By The Peninsula Foodist | 3 comments | 2,774 views