Longtime Palo Alto Italian restaurant Spalti has closed, and the owner is partnering with another local restauranteur to open a new concept: Smyrna, a Greek-Turkish restaurant.

Philliph Bulutogli opened Spalti at 417 S. California Ave. nearly three decades ago. Though the restaurant served Northern Italian food, Bulutogli is a Turkish-born Kurd. Bulutogli sold the restaurant in 2012 to Ayhan Akgul, who is also from Turkey. 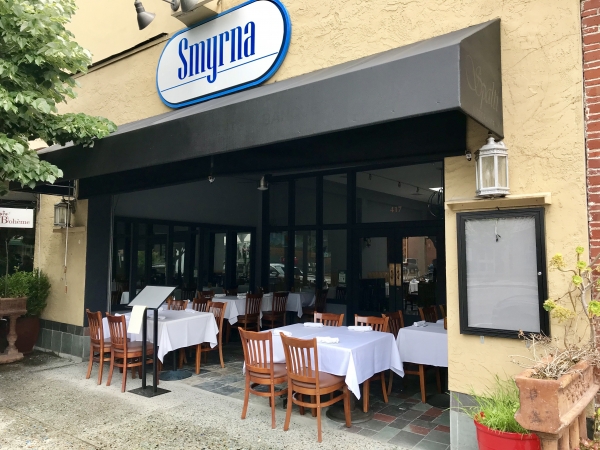 Now, Akgul has teamed up with another native of Turkey and local restaurant owner, Zubi Duygu of Urfa Bistro in Los Altos, to open Smyrna this month, Duygu said. Urfa, which opened in downtown Los Altos in 2015, serves a primarily Turkish menu.

The new restaurant is named for an ancient Greek city, once the site of the Greco-Turkish War and now known in Turkey by a different name, Izmir. Smyrna's tagline is "Two cultures, one journey," Duygu said.

I've dined at Spalti many times. Italian food always works for most folks. Who wants to eat Greek-Turkish food? Are they also going to serve retsina (wine with Aleppo pine resin in it) as well? Try it ONCE and let us know if you'll be going back for more.


I'll wait and see about the food, but you can keep the Retsina...like drinking kerosene.


I've eaten Turkish-Mediterranean food (e.g, shish kabobs, etc) at Urfa Bistro and loved it. With the owner of that restaurant now on board toy revive the menu and decor at Spalti/SMYRNA I am very optimistic that it will offer a great attraction, distinguishing itself from all of the Italian restaurants on California Ave.

Report Objectionable Content
+   7 people like this
Posted by Keri, a resident of Charleston Meadows,
on May 10, 2019 at 11:35 am
Keri is a registered user.


Nobody goes out for Italian food anymore. It has become rather blase. People want something more exotic.


I look forward to eating some excellent Greek-Turkish food at the new restaurant. I am also hopeful that they will find some way to continue making the very fine lamb chops that Spalti has always done.


I'm looking forward to some a great Turkish and Greek menu!

Report Objectionable Content
+   3 people like this
Posted by Culinary Diversity, a resident of Downtown North,
on May 10, 2019 at 6:48 pm


OK as long as they aren't serving goat.


Question to Culinary Diversity: Why they shouldn't be serving goat? Is something wrong with goat meat? If you are so culinary diverse, then be more open-minded. Things got better in the recent years, but when i came to US two decades ago, I learned that typical Americans knew and ate only two kinds of meat: beef and chicken. How limiting!


Will they offer silverware or do you have to eat with your hands like at that Moroccan restaurant in downtown PA around 30 years ago? Except for maybe sushi, eating an entire meal (except for perhaps a hamburger/fries or pizza etc.) exclusively with with one's hands is a sign of a backwards society. On the other hand, eating sushi with a fork is a sign of a backwards individual!


> Why they shouldn't be serving goat? Is something wrong with goat meat? Ethnocentricities aside, that would be like asking what's wrong with eating dog meat at a rural Chinese or Native American themed restaurant. To each his/her own. With America becoming more culturally & culinary 'diverse' nothing should surprise us anymore.

Report Objectionable Content
+   1 person likes this
Posted by JLN, a resident of Charleston Meadows,
on May 11, 2019 at 8:03 pm
JLN is a registered user.


"To each his/her own" Yes. But I would like to point out that the powers that be have recently *officially* agreed that it is proper grammar to use "they their" etc instead of the singular "he/she his/her." Awkward, but more pressing issues, whew, gasp!


"Lawman," please study further. You'll discover that there ARE no "powers-that-be" deciding ("officially") English usage questions in this country. Only powers-that-want-to-be.


>> With America becoming more culturally & culinary 'diverse' nothing should surprise us anymore. Yes. Wait until some recently transplanted Yanomamo from the Amazon rain forest decides to open up a culturally-inspired restaurant in PA. Roasted grubs for appetizers and refreshing beverages fermented with human saliva. Yumm!


Will they be serving grilled Turkey Kabobs? I've read that Turks do eat turkey but it's not called turkey in their country. Kind of like Russians probably have another name for White Russians (the cocktail).

"It's too little too late" and other reasons why not
By Sherry Listgarten | 13 comments | 4,115 views

Couples and Premarital: Parallel Living: What to Do
By Chandrama Anderson | 0 comments | 2,281 views