This will be the last weekend for diners to dig into deep-dish pizza at Pizz'a Chicago's original Palo Alto location before the longtime restaurant relocates less than 2 miles away.

A three-story mixed-use project has been proposed for the site of the 4115 El Camino Real restaurant, so owner Juan Lorenz is moving the pizzeria to 2305 El Camino Real. He plans to close the current location on Monday or Tuesday, June 24 or 25, and open the new one mid- or late-week.

Pizz'a Chicago has been serving deep-dish pizza since the 1990s. The first location opened in Santa Clara in 1991 and then Palo Alto several years later.

The new Palo Alto location, just off California Avenue, will serve the same menu but Lorenz plans to gradually add new items, including entrees like salmon and burgers and potentially breakfast on weekends.

"It's going to be a good change," Lorenz said of the new space. 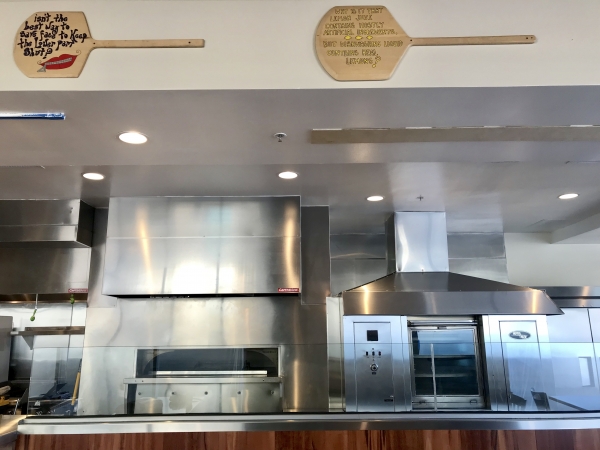 Wooden pizza peels hang above the kitchen at the new Pizz'a Chicago at 2305 El Camino Real in Palo Alto. Photo by Elena Kadvany.

Longtime customers will recognize some of the original Pizz'a Chicago decor, including large cans of olive oil and pizza peels with punchy quotes on them ("After eating, do amphibians need to wait an hour before getting out of the water?"). A "Windy City" mural by Greg Brown inside the existing restaurant will also be moved to the walls of the new location.

Given parking in the area can be difficult (there is a lot just behind the restaurant), Lorenz plans to allow customers to pick up orders and pay staff using a mobile credit card machine without coming inside.

Manuela is a registered user.


Good luck to Pizz'a Chicago as they move to their new location.


A lot of us very long time PA residents will remember this El Camino location has been a pizza place for a very long time. We frequented Shakey's Pizza Parlor there for all of our little league and soccer end of seasons parties, and very many kid's birthdays. The family had lots of great memories in that location...sorry to see it go

Doing more with the natural spaces we have
By Sherry Listgarten | 8 comments | 3,068 views

Can the Memphis police behavior ever happen here?
By Diana Diamond | 14 comments | 1,117 views