Uploaded: Jul 3, 2019
When issues with his partner led to the closure of their popular gluten-free bakery operation, Ducks and Dragons, it would have been easy for Mina Makram to throw in the towel.

Instead, he decided to restart the business under a new name -- meaning he had to reassign his lease, buy new ingredients and start anew the laborious permitting process to sell his baked goods at farmers markets and grocery stores.

In June, Makram launched a GoFundMe campaign to help defray the startup costs. So far, he's raised about $11,000 toward a $30,000 goal. He hopes to return to his regular farmers markets in mid-July and will be hosting pop-ups this month. He's also looking into open a brick-and-mortar bakery on the Peninsula. 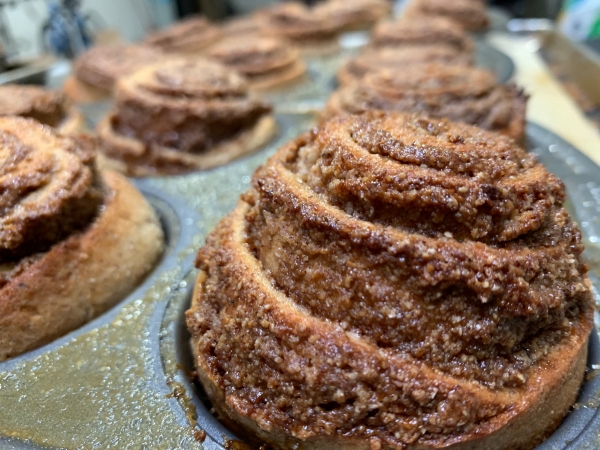 Gluten-free cinnamon rolls from Ducks and Dragons, which has been reborn as Misfits Bakehouse. Photo courtesy Mina Makram.

Makram started Ducks and Dragons with his then-partner and girlfriend, Kim Sullivan, in 2015. He was an engineer and weighed over 400 pounds. He started a low-carb diet to shed the weight and was sorely disappointed by the gluten-free bread options at the time.

"I felt like I was punishing myself" when he ate gluten-free bread, he said. "They all tasted horrible, like cardboard, dry."

Makram had never baked but set about developing a better gluten-free recipe at home, tinkering with almond and coconut flour, flax seeds, psyllium husks and xanthan gum. He eventually decided to leave his job and bake full time, selling his bread at farmers markets.

Ducks and Dragons drew a loyal following of gluten-free customers. About six months in, they moved into a wholesale production facility in San Carlos, where until recently customers could pick up gluten-free baked goods from baguettes and sandwich bread to bagels and cinnamon rolls. Almost all of their products are also grain-free, soy-free, corn-free and dairy-free. 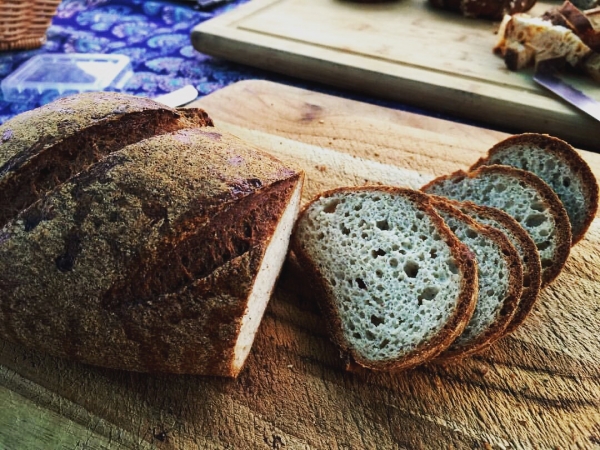 Ducks and Dragons is now Misfits Bakehouse, a reference to an early Apple commercial narrated by Steve Jobs ("Here's to the crazy ones, the misfits, the rebels, the troublemakers, the round pegs in the square holes… the ones who see things differently.").

Even if Makram doesn’t meet his GoFundMe goal, he can collect the money he raises. He's already used funds to file for permits and get the necessary equipment turned around for the new operation. He and his staff are back in the San Carlos facility experimenting with new items, including a cakes and a gluten-free croissant.

He's eager to give back to the many customers who donated to the GoFundMe and reached out to him after news of Ducks and Dragons' closure spread.

For those who can't wait, look for Misfits Bakehouse pop-ups on Sunday, July 7, at 10 a.m. at the San Carlos facility (940 Commercial St., Suite D) and on Sunday, July 14, at Wursthall in San Mateo (310 Baldwin Ave.). Customers can pre-order bread for pick-up at both events. Makram plans to serve sandwiches and some grab-and-go food at the July 7 pop-up. On July 14, Wrusthall's smash burger will be served on Makram's paleo brioche buns, plus cinnamon rolls for dessert and gluten-free cider on tap.


That's wonderful news. It is very difficult to cook for a family gluten-free. We look forward to trying your products soon. Good luck and hope you all can open a store soon. Our family has all lost weight being gluten-free

Report Objectionable Content
+   1 person likes this
Posted by scoldshap, a resident of Woodside: Kings Mountain/Skyline,
on Jul 6, 2019 at 10:02 am
scoldshap is a registered user.


We have been long-time customers of Ducks and Dragons. Outstanding baked goods and such good people. The best we have ever had. I am so glad he is continuing on. We support Misfits Bakehouse!!!

From Belmont to Belgium, Jane’s Beer Store has all the craft brews you need
By The Peninsula Foodist | 1 comment | 4,054 views