The popular Japanese ramen chain is opening its newest location this fall at Main St. Cupertino, a mixed-use development with restaurants, retail and housing. Ippudo will be located at 19540 Vallco Parkway, Suite 130.

Shigemi Kawahara opened the original Ippudo in Fukuoka, Japan in 1985, according to the company's website. A New York City outpost marked the company's first foray into the U.S. in 2008. 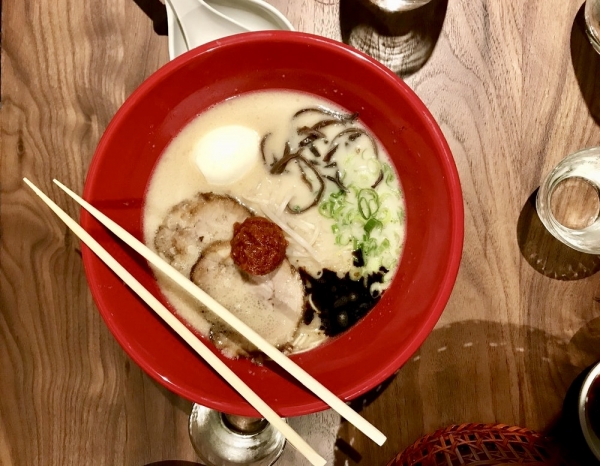 Ippudo is bringing its popular ramen to Cupertino in September. Photo by Elena Kadvany.

Ippudo opened its first West Coast restaurant in Berkeley in 2017 to much excitement and long lines. A San Francisco outpost followed the next year. Ippudo also opened an outpost of its quick-service ramen spin-off, Kuro-Obi, at Hillsdale Shopping Center in San Mateo last year.

Ippudo uses a "double maturation process" to make its pork broth, according to the company. The broth is cooked for 18 hours and then on lower heat for another full day. The restaurant also serves appetizers, salads, beer, wine and sake.

Japanese-born ramen chains have been flocking to the Bay Area in droves recently: Ramen Nagi in Palo Alto and Santa Clara, Taishoken in San Mateo and Mensho Tokyo in San Francisco, with more on the way. Afuri Ramen and Dumpling is opening locations in Cupertino this year and Mountain View in 2020.

Ippudo is currently hiring for the Cupertino location, which is set to open in September.


This sounds interesting! Does anyone have a favorite ramen spot? We don't eat much ramen, but it is such a growing trend (or fad). I'd like to try it -- but at a restaurant that many people agree is a good choice.

Report Objectionable Content
Posted by resident, a resident of Old Palo Alto,
on Jul 24, 2019 at 9:31 am


The only good ramen in Palo Alto that we have found is Ramen Nagi on Bryant Street.

Ramen isn't a fad; it has been popular in the USA for at least 20 years. If anything, ramen is declining now as udon and Asian fast foods become more popular.

Report Objectionable Content
Posted by Nayeli, a resident of Midtown,
on Jul 24, 2019 at 2:03 pm
Nayeli is a registered user.

Thanks for the recommendation. I like ramen even though I have never had any at a restaurant (other than one in Spain -- which tasted like something I would make at home).

I don't mean that it is a fad like a pet rock. I meant like a rapidly popular culinary treats like boba tea, frozen yogurt or frosé. I understand that ramen has been around for a long time. It has been a staple in college dorm rooms for decades. However, there seems to be a growth of ramen-centric specialty restaurants.

Report Objectionable Content
Posted by resident, a resident of Old Palo Alto,
on Jul 24, 2019 at 2:52 pm


What I meant is that the peak of ramen specialty restaurants was 10 to 20 years ago. Maybe not so much in Menlo Park and Palo Alto, but there have been many ramen restaurants in Mountain View, Sunnyvale, and Santa Clara for many years. If anything, the overall number of ramen restaurants in those cities has declined in recent years as other Asian fast foods like soup dumplings, hot pots, and udon become more popular.


Nayeli, "resident" has it exactly right. Ramen houses (the Japanese specialty casual restaurant genre employing fresh noodles, house-recipe broths, and fresh ingredients, and never to be remotely confused with the dorm-room instant-noodle packets -- a completely different sense of "ramen" from the subject of this blog's and resident's use of the word) have thrived in the Bay Area for many years. Famous "destination" ramen places have long been concentrated in San Mateo and Santa Clara. We have three and a half ramen houses in downtown Mountain View's Castro-Street neighborhood (none as famous as the high-profile San-Mateo or Santa-Clara examples); three of those have been there between 10 and 20 years (the other, the newest, only five or so years old, is a ramen house just at lunch, an izakaya at night).

When Melanie Wong maintained her personal Bay-Area ramen-house ranking list on Chowhound.com with 80-odd entries, many of her favorites were here on the Peninsula. That list was most active 10 or 12 years ago.

If the ramen-house genre seems novel to you, or "rapidly popular like boba tea or frozen yogurt," that probably means you are just starting to notice them, or that mentions of them are becoming more frequent in the media you happen to read.

For an entertaining introduction to Japanese ramen houses, see the famous 1985 film "Tampopo" from Japan. One of the classic food movies.

Report Objectionable Content
Posted by ramen eater, a resident of another community,
on Jul 25, 2019 at 6:58 am

"We don't eat much ramen, but it is such a growing trend (or fad). I'd like to try it -- but at a restaurant that many people agree is a good choice. "

So you like ramen but you have never tried it???
Maybe when you and your family came legally to the US , you had ramen but you forgot about it????