Mina Makram, owner of Misfits Bakehouse (formerly Ducks and Dragons in San Carlos), is taking over the 2706 Middlefield Road space. 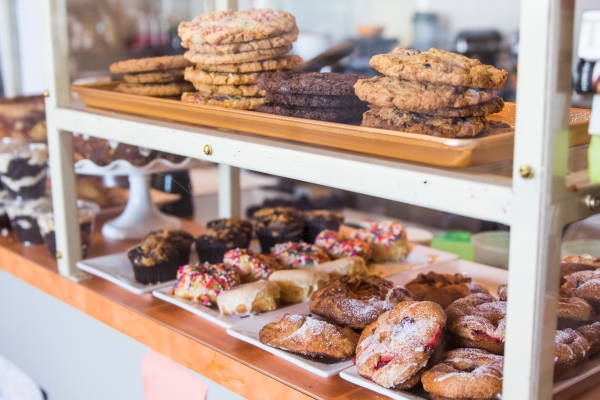 In an Instagram post announcing the bakery's closure, she said the business has been successful financially but that "it is time to go in a new direction and move on in a very positive manner."

"We wanted to bring healthy and dietary friendly but delicious, creative and fun baked goods and lunches to the local community and we feel that we have accomplished that mission," she wrote.

Gracie Jones Bake Shop will close for good on Friday, Aug. 16. Until then, the bakery will be open Monday through Friday from 10 a.m. to 3 p.m. and closed on Saturday. Jones will continue to sell her gluten-free flour mix at local restaurants and retail stores; follow the bake shop's Instagram for updates on that front. Asian Box is also now serving banh mi sandwiches made on Jones' gluten-free baguette.

Makram recently restarted Ducks and Dragons as a new business after a falling out with his partner. He launched a GoFundMe campaign to help pay for permits, new equipment and other startup costs, and has been hosting pop-ups while he gets his San Carlos production facility up and running again.

With the Palo Alto space, Makram will be realizing a longtime dream to open "a restaurant where it does not matter what your dietary requirements are," he said in a previous interview. "You can come in and enjoy an awesome meal."

Misfits Kitchen will serve Makram's popular bread and pastries as well as gluten-free, grain-free and paleo meals. Makram, an engineer by training, started baking at home after being frustrated with the quality of most gluten-free bread.

Makram plans to hold a soft opening in September and open fully in October.

We will miss you, Gracie!! What a unique opportunity for our gluten-free foodie child to enjoy a meal out and great baked goods! I will miss getting the baguettes!

Report Objectionable Content
+   14 people like this
Posted by Celiac's Sufferer, a resident of another community,
on Jul 27, 2019 at 2:11 pm


I cannot eat gluten products as I have been diagnosed with early stage Celiac's Disease.

Wet gas and diarrhea whenever I consume gluten wheat products.

I fully understand & empathize with your digestive & excretion-related discomfiture.
Being a Celiac's sufferer myself, gluten products wreak havoc with my innards & I am now forced to consume only non-gluten products.

This condition developed later in life for some reason or another.


We have loved Mina's baking in San Carlos, its great he is taking over.

Dehydrating for Backpacking and Camping
By Laura Stec | 2 comments | 1,581 views