Uploaded: Aug 16, 2019
Redwood City bar Timber & Salt wants you to put down your phone, listen to a vinyl record and have a drink.

For four hours on Monday evening (Aug. 19), Timber & Salt will transform into a listening bar, modeled after bars in Japan that play vinyl records and serve high-quality drinks.

"Listening bars are simply cocktail bars that play vinyl records (usually to a theme) and serve drinks and light snacks," owner Stewart Putney explained. "They are popular in Japan and gaining traction in California."

Knowing Timber & Salt bar manager and partner Brian Matulis' affinity for music and vinyl collection, an audiophile customer built him a turntable, Putney said. Encouraged by a few regulars, they put the turntable to use during a test run of the listening bar concept in July. The records of choice featured psychedelic music from San Francisco in 1960s through today. 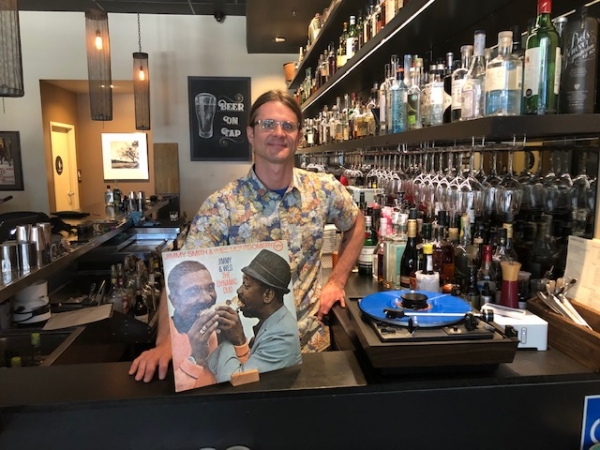 Timber & Salt bar manager and partner Brian Matulis with a turntable a customer made for him. Photo courtesy Stewart Putney.

At the Monday pop-up, dubbed "Near Mint Vinyl Record Bar," there will be cocktails, small bites and records spinning the jazz and blues music of Jimmy Smith, who popularized the electric Hammond organ. The bar will be serving its typical menu, plus "limited edition" or rare spirits and a few "surprises," Putney said. The full kitchen won't be open, so expect snacks like sandwiches, brownies and cookies.

Smartphone use is discouraged but won't be explicitly prohibited during the pop-up, Putney said.

"Many cocktails bars, listening or just 'craft,' discourage phones, tablets, PC's, etc. We don't 'ban' devices, but we do hope guests use the time to visit with friends, make a few new ones and enjoy the music," Putney said.

The pop-up will be this Monday, Aug. 19, from 5-9 p.m. at Timber & Salt, 881 Middlefield Road, Redwood City. Putney said he hopes to repeat the event every month or so, depending on response.

Nearby Redwood City wine bar Bottle Shop has also gotten into the vinyl game with "Wax Wednesdays," during which drinks are discounted -- and extra for customers who bring in records that the bar plays.


I have spent some time at Timber and Salt. Although, only on special occasions. However, I AM happy that they are a successful part of Redwood City's thriving Culinary and Bar scene. I'm sure Elena would agree that a town can't have too many restaurants. And places to hang out with friends !


When is the date of this event to take place?

Residents of multi-family housing should have access to EV charging
By Sherry Listgarten | 8 comments | 4,406 views