Dunkin' Donuts to fill a hole in Redwood City

The international donut and coffee chain is planning a location for 593 Woodside Road. A PR representative confirmed the location but did not have further information about the opening. Plans have for the space have been approved but a permit has not yet been issued, according to the City of Redwood City. 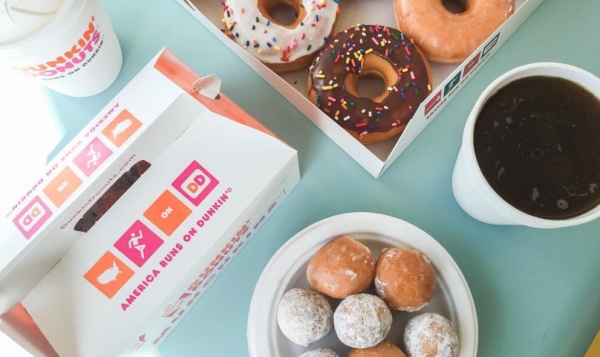 Dunkin' Donuts started in Massachusetts in 1948 and is a cult favorite on the East Coast, where its coffee, donut holes and crazy latte flavors are a way of life for many.

Dunkin' Donuts started franchising in California in 2013 and has rapidly expanded since then. (The company estimates that it will eventually have 1,000 locations throughout the state.) The Bay Area has Dunkin' Donuts in San Carlos, Half Moon Bay, South San Francisco and San Jose, among other cities.

The company has grown exponentially since its humble beginnings. There are more than 12,000 Dunkin' Donuts worldwide and the company plans to more than double its U.S. presence long term. The franchised chain has made attempts to evolve with the times, including by rolling out nationwide delivery and adding menu items like a Beyond Meat breakfast sandwich, egg white bowl and nitro cold brew coffee.

The company also debuted last year in Concord its first "next generation concept design" store, with digital kiosks, curbside delivery, coffee on tap and a new name: just Dunkin'. The San Carlos outpost is also a redesigned "next generation" store.

Stay tuned for more details for the Redwood City location.

Don Keedick is a registered user.


Finally, some civilized coffee around here

Report Objectionable Content
Posted by Eastie, a resident of Charleston Meadows,
on Sep 5, 2019 at 1:59 pm


Now we only need a Friendly's and Papa Gino's and it would be like I never left home.

Report Objectionable Content
Posted by Neighbor, a resident of Another Mountain View Neighborhood,
on Sep 5, 2019 at 4:29 pm


What we really need is more variety and additional locations around the Bay Area. I don't know what forces are preventing these establishments from settling in my hometown, but it would be nice to see an addition of a Sonic and Dutch Bros Coffee. Why advertise on TV when it's not even remotely nearby within driving distance. Bringing Dunkin Donuts here in town would be a start as well.

Report Objectionable Content
Posted by Resident, a resident of Another Palo Alto neighborhood,
on Sep 5, 2019 at 5:24 pm


Another mediocre chain specializing in a food that is not healthy, namely doughnuts.

What would be nice is something refreshingly different to what we already have. I would love to see Pret a Manger expand to the Bay Area. A healthy sandwich and more chain which is very different to any other quick meal offerings.

Report Objectionable Content
Posted by Kathryn , a resident of another community,
on Sep 5, 2019 at 5:39 pm


Unfortunately this location could not be worse! There is NO parking! The lot is only about 10 spots and the entrance is a well known bottle neck, the exit a dangerous outlet onto Woodside at Hudson and Woodside. Who thought this would be a good location?

Report Objectionable Content
Posted by Mike DiMartino, a resident of Triple El,
on Sep 5, 2019 at 8:56 pm

Report Objectionable Content
Posted by Mike, a resident of another community,
on Sep 6, 2019 at 12:35 am


Couldn't agree more that this seems like an a ideal location in an argument setting. The parking lot is full all day with no major attraction in that lot. There are maybe 10 spaces max to serve 6-7 businesses. Street parking is all red zone on Woodside and Center St is packed with residential. Luckily, RWC downtown is jam packed with nice choices: Red Giant, Philz, Starbucks Reserve, La Tartine, Joe and the Juice, and best of all, a new Coupa Cafe.

Report Objectionable Content
Posted by Eric, a resident of Old Mountain View,
on Sep 6, 2019 at 7:11 am


I would be happy to see one in Mountain View, maybe at the vacated Happi House site or the vacated McDonalds in Sunnyvale. Then again, if a McDonalds couldn't make it in this area, I don't know how Dunkin Donuts would fare


Menlo Park could use a good doughnut shop. I remember Winchell's doughnuts on Middlefield, back in the old days.

Report Objectionable Content
Posted by I like the word “the”, a resident of Woodside High School,
on Sep 6, 2019 at 12:11 pm


Guess the almost always empty San Carlos location was not close enough. And in SC the problem is not the parking situation, maybe the fact that they are out of the popular doughnuts early on, and won't make more for the afternoon crowd.

I rather go to Chuck's anyway.

Report Objectionable Content
Posted by Fr0hickey, a resident of Fairmeadow,
on Sep 6, 2019 at 12:28 pm
Fr0hickey is a registered user.


593 Woodside Road. Need to remember this location when it opens.
For people complaining that its not a healthy choice, that's what it is, a choice. What use is 'choice' if everything is healthy but not palatable?

Report Objectionable Content
Posted by Resident, a resident of Another Palo Alto neighborhood,
on Sep 6, 2019 at 12:41 pm


If every fast food restaurant provides junk food, it is not giving us choice. I choose healthy food, but it is hard to find. Panera is acceptable, but we need more variety too.

Even if we want healthy options, unless the restaurants open branches it is not giving choices to those who do not want things like doughnut chains.


That's 4 blocks away from Chuck's Donuts, a locally owned place that's been here forever. Not sure that's "filling a hole".

Report Objectionable Content
Posted by Generic Doughnuts, a resident of Another Mountain View Neighborhood,
on Sep 11, 2019 at 10:01 am


It's the Olive Garden of doughnut shops. Get excited!!!

Report Objectionable Content
Posted by CrescentParkAnon., a resident of Crescent Park,
on Sep 11, 2019 at 10:21 am


It seems like most of the the new stuff opening in the area is unhealthy food full of sugar in more extreme and unhealthy ways. Is this low to no prep, low service, low cost ingredient junk food, the only thing that can survive in this town anymore? Are they purposefully drumming up new life-long customers for Stanford Hospital?

Report Objectionable Content
Posted by CrescentParkAnon., a resident of Crescent Park,
on Sep 11, 2019 at 10:26 am


Eric
>> I would be happy to see one in Mountain View, maybe at the vacated Happi House site

What happened to Happi House anyway? That was pretty decent and simple food for fast food. They say it is closed for remodeling, but from time to time when I pass by the area I don't see any remodeling going on. I didn't stop there often, but it was nice to know it was there. Are they coming back ever or not?

Report Objectionable Content
Posted by Runnymouthe, a resident of another community,
on Sep 11, 2019 at 10:30 am


Chuck's Donuts (and Happy Donuts, on El Camino) has been declining in quality for years - it's nice to see a new option open up on the stretch. Maybe some friendly competition will up the ante?

And please. Noting "bad parking" along Woodside is as useful as mentioning "increasing congestion" in the bay area - there isn't a square inch of Redwood City, San Carlos, or Belmont with "good parking" unless it's attached to a strip mall -- I guess we could always use a few more of those!

Also, this paper's silly "Neighborhood" field algorithm locks me into Mountain View despite living in Woodside - why would you even have that option limit itself, unless people really want to specifically ignore opinions from certain areas? Scary.


> A healthy sandwich and more chain which is very different to any other quick meal offerings.

A healthy sandwich and S'more chain which is very different to any other quick meal offerings.


Report Objectionable Content
Posted by musical, a resident of Woodside: Woodside Hills,
on Sep 11, 2019 at 12:28 pm


off-topic @Runnymouthe, you must have accessed this blog via the mv-voice website. I normally use paloaltoonline, but tried almanacnews which you can see allows Woodside selections.


>> Another mediocre chain specializing in a food that is not healthy, namely doughnuts.

>> It seems like most of the new stuff opening in the area is unhealthy food full of sugar in more extreme and unhealthy ways.

Seriously folks...sugar is sugar & the body cannot tell the difference between the sugar in a banana or the refined sugar in a Snickers bar. It's all glucose.

The key of course is don't go overboard.

The key consideration should be 'empty calories' as this is what leads to nutritional deficiencies and obesity.

Report Objectionable Content
Posted by CrescentParkAnon., a resident of Crescent Park,
on Sep 11, 2019 at 4:38 pm

>> sugar is sugar & the body cannot tell the difference between the sugar in a banana or the refined sugar in a Snickers bar.

If that were true there would not be a need to differentiate between glycemic index and glycemic load. Sugar eaten with fiber affects the body differently from refined sugar in candy or cookies.

Not to mention that glucose and fructose are metabolized completely differently by the body.


>> If that were true there would not be a need to differentiate between glycemic index and glycemic load. Sugar eaten with fiber affects the body differently from refined sugar in candy or cookies.

^^^ Eating a 'power/nature' bar with fiber VS a Snickers amounts to the same thing except for the speed of the sugar release.

While a nature/power bar (with its slower sugar release) might work OK for an extended work-out or hike, something like a Snickers kicks in almost immediately.

Power bars/candy bars amount to the same thing. Both have large amounts of sugar and cannot be considered 'health foods'...regardless of any fiber factor.

>>Not to mention that glucose and fructose are metabolized completely differently by the body.

In the case of suspected diabetic dizziness, giving the individual a piece of hard candy OR an orange would have the same effect.

Report Objectionable Content
Posted by CrescentParkAnon., a resident of Crescent Park,
on Sep 12, 2019 at 12:08 pm


MC, your arguments are incomplete and disingenuous. Doctors of scientists should not need to be mealy-mouthed or propagandistic if they are dealing out facts.

>> ^^^ Eating a 'power/nature' bar with fiber VS a Snickers amounts to the same thing except for the speed of the sugar release.

You contradict yourself within the same sentence. Then, they are indeed not the same thing. Blood sugar spikes occur when your blood sugar rises and then falls sharply after you eat. In the short term, they can cause lethargy and hunger. ... Blood sugar spikes can also cause your blood vessels to harden and narrow, which can lead to a heart attack or stroke.

You need to pay me as much as you supposedly pay Stanford to educate you. Go back to school MD.

Also, I never mentioned Power Bars or referred to them as a health food. That is something you dishonestly attribute to me in your reply.

I also never said there was healthy and unhealthy sugars, I was talking foods, you are talking contradiction.

What's more the gist of your original comment was "The key of course is don't go overboard." and the comments from readers were that there are more dessert stores opening up feeding people more junk in the form of sugar -- i.e. having so many sugar dispensaries is GOING OVERBOARD.

This barbecue business was kicked out of Belmont. Now it's a Sunday fixture in Redwood City.
By The Peninsula Foodist | 2 comments | 4,349 views

Doing more with the natural spaces we have
By Sherry Listgarten | 8 comments | 3,129 views

Can the Memphis police behavior ever happen here?
By Diana Diamond | 20 comments | 1,303 views