A local franchise of Taste Buds Kitchen, "a kids kitchen by day and BYOB adult kitchen by night," will open this fall in Palo Alto.

Scott and Susie Andersen took over 2775 Middlefield Road after Starbucks closed in February after nearly two decades there.

Scott was born and raised in Palo Alto and met his now-wife in London. His background is in tech marketing and hers, education. They recently relocated to Palo Alto and wanted to work on a project together.

Taste Buds first started as holiday baking classes in New York City in 2007 and has since grown to a franchised company that offers a full range of cooking classes and events in kitchens across the country. The Palo Alto Taste Buds will be the company's 13th location. 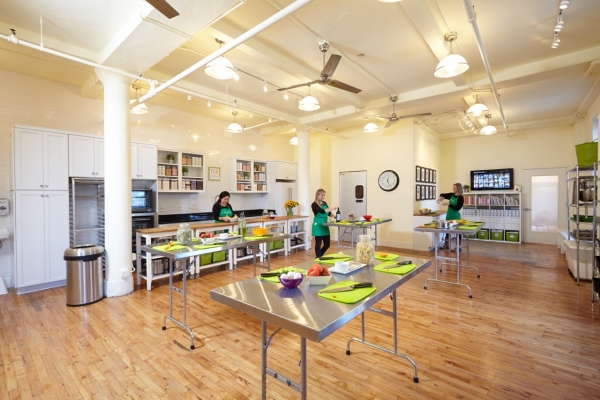 The goal, Scott Andersen said, is to get "people comfortable in the kitchen and understanding that cooking delicious, healthy food does not have to be that difficult. It can be fun and more importantly, it can be a family experience."

The 1,600-square-foot space is being designed to look like a home kitchen rather than a professional one so it feels accessible rather than intimidating, he said.

People of all ages will be able to take classes at the Palo Alto kitchen, from baking cupcakes and making fresh pasta to how to cook with beer and wine. As a franchisee, the Andersens have access to hundreds of Taste Buds recipes and courses but can also create their own based on local demand and desires.

Classes will be led by a professionally trained chef and Susie Andersen. They hope to hire more chefs with specialties in the future. Taste Buds can also go on the road, offering classes at schools, community centers or companies. There are classes for kids, families and adults.

The classes are all two or three hours and cost $40 to $89 per person, excluding drinks.

Adult classes are always bring-your-own-bottle (for a corkage fee). The Palo Alto location has a liquor license so there will also be alcohol for sale during adult classes. They plan to serve wine and beer from local, family owned operations.

They're hoping to open in October.

Report Objectionable Content
+   1 person likes this
Posted by Resident, a resident of Another Palo Alto neighborhood,
on Sep 9, 2019 at 3:51 pm


The next venue for birthday parties, bachelorette parties, and prizes for school fundraisers or gifts to teachers.

A Pragmatic Approach to A Trillion Trees
By Sherry Listgarten | 4 comments | 4,084 views

Singapore's oldest cafe was about to open in Palo Alto. Then, the coronavirus hit.
By Elena Kadvany | 2 comments | 3,670 views

Repairing a Disagreement with your Beloved & “Physical” vs. “Social” Distancing
By Chandrama Anderson | 2 comments | 2,754 views