Uploaded: Nov 13, 2019
The Post has seen three chefs come and go since opening in downtown Los Altos in April 2018.

The high turnover started to affect the consistency and quality of the food at the 395 Main St. restaurant, owner Vickie Breslin said in an interview. Knowing that something needed to change, she connected through a mutual friend with Charlie Ayers, who made a reputation as Google's first executive chef before running the now-closed Calafia Cafe in Palo Alto. He met with Breslin, came in to observe the restaurant and developed new dishes, ultimately changing 70 percent of The Post's menu.

"I don't want to say this but it's true: I felt like our food was a little tired," Breslin said. Now, "we have new items on the menu that go back to exactly what I set out to do, which is the locally sourced comfort food." 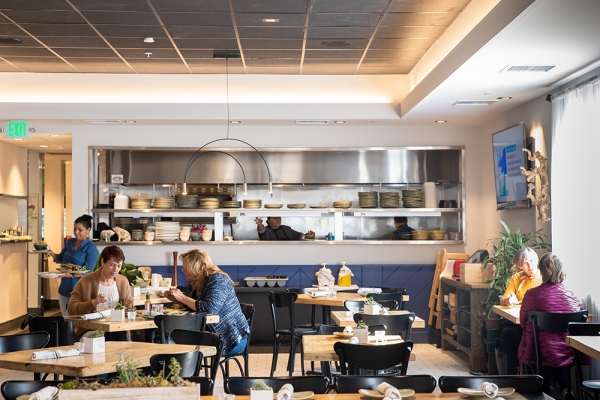 The Post has faced high kitchen turnover since opening in Los Altos in 2018. Photo by Magali Gauthier.

New lunch, dinner, dessert and happy hours menus debuted a few weeks ago. The Post has also resumed serving brunch on weekends, which had stopped due to lack of staffing, Breslin said. New wine and cocktail lists, a kids' menu and even items for canine patrons are also on the way. 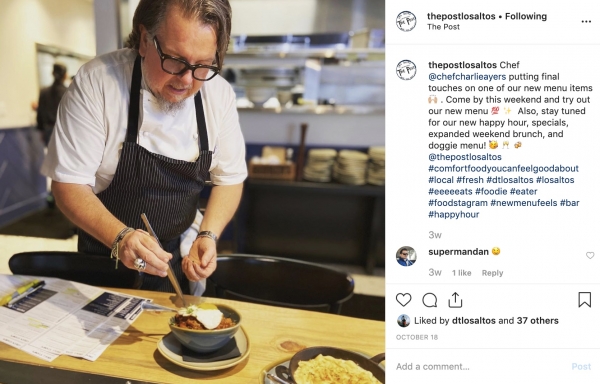 Ayers will be in The Post kitchen full time for the foreseeable future, helping to train other staff on the new menus.

"I really want to make sure that the menu and the execution is going to be consistent," Breslin said. "That's the problem we faced and I think a lot of restaurants in the Bay Area (face) because it is so hard to hire. You don't have enough staff."

Despite feeling the squeeze from the regional labor shortage, Breslin said she never worried she'd have to close her doors, "but I knew long term that something would need to change with our menu. Because restaurants fail all the time. I'm aware of that."

+   24 people like this
Posted by Los Altos customers known as difficult, a resident of Another Mountain View Neighborhood,
on Nov 13, 2019 at 10:33 am


I have 2 friends who are both food servers. I used to ask them why not try and get a job in one of the downtown Los altos restaurants, figuring the tips would be better, and they both said the same thing, independently I might add, that the customers are regularly much more rude and difficult in Los Altos than in PA, MV or Sunnyvale.

The complaints are surprisingly similar: Many treat you rudely, as if you're their personal servant. They both had stories of the "Ladies lunch groups" that seem to try to impress others the group by being demanding and nit-picky about every little thing, and even mildly mocking the servers with eye rolls and sarcastic sighs of disdain.
The tips were really no different in the end, so it came down to work environment.

I'd never thought much about this until now. When servers can pick/choose from any number of places who are clamoring for their work, they'll go where they get the most respect.
It's an issue many won't think about, but sometimes the problem lies within.

Report Objectionable Content
+   4 people like this
Posted by Los Altos reputation, a resident of Another Mountain View Neighborhood,
on Nov 14, 2019 at 2:59 pm


Interesting to see the comment above. It fits in with what I've heard.

I go regularly to downtown Los Altos, and chat with people working retail there. Ordinary folks, who've sometimes been around the area their whole life.

An observation surfaced when discussing an upscale restaurant that had opened there (a few years ago). "It'll have a hard time. Remember when ---- opened? It struggled and finally closed."

"But downtown Los Altos ought to be good for restaurants," I said. The neighborhood seems affluent.

Yes, came the reply -- but they don't want to spend their money. "Many of the longterm residents are affluent, but cheap. I work here, I see this all the time in their behavior."


This is great news! We always love going to the Post, Vickie and Manager Rob are both so friendly as are all of the staff. It's the perfect 'neighborhood great food great company' place to go.


We love The Post, and glad that Charlie is on board to make it even better. Sad that Los Altos has a difficult reputation.


Seems to me that LA is a very diverse community, can't all be “cheap". There are many restaurants that have been quite successful and long term, this almost sounds like employees with sour grapes?

Regardless, been to the Post quite a few times, food is always great, service excellent and it's anice place to hook up with friends for a night out.

Report Objectionable Content
+   4 people like this
Posted by Former LAH Resident, a resident of Los Altos Hills,
on Nov 15, 2019 at 9:35 am


Unlike downtown Palo Alto & Mountain View, Los Altos is not very ethnically diverse in terms of foot traffic & clientele. This is an obvious observation whether one is at the post office, various banks, hair dressers or restaurants.

It is a conservative community like Danville *ugh*...mostly white conservative folks with minimal room or compassion for the lesser endowed (i.e. homeless, working class etc.).

And the residents prefer to keep it that way.


I'm a food server who used to work at a now defunct, shortly popular eatery.
I left the job specifically so I would not have to suffer the rude abuse the customers would give me, or have to watch my co-workers go through it.

It's not all the customers, but every single shift, without question, you would have to suffer rude abuse by at least one customer or group.
This sort of thing comes with the job, but only rarely in other town, maybe once per week. It was every single shift in LA.
I'm glad people are talking about it. One day a regular stuck up for me and really laid into a snarky woman and her friends. It was a glorious day for sure, but given the fact that my skills are needed pretty much everywhere, I've chosen to serve happy nice people in SV and MV for a living and I've eliminated the stress that the LA customers would regularly bring me.


Went once, the menu was uninspired and the noise level was off the charts.

A fond farewell from the Peninsula Foodist
By paloaltoonline.com | 18 comments | 5,052 views