Uploaded: Dec 3, 2019
There's a new sign outside and new ownership in place, but otherwise things are largely the same at the former Palo Alto Pizza Co. at 2450 Park Blvd. in Palo Alto. 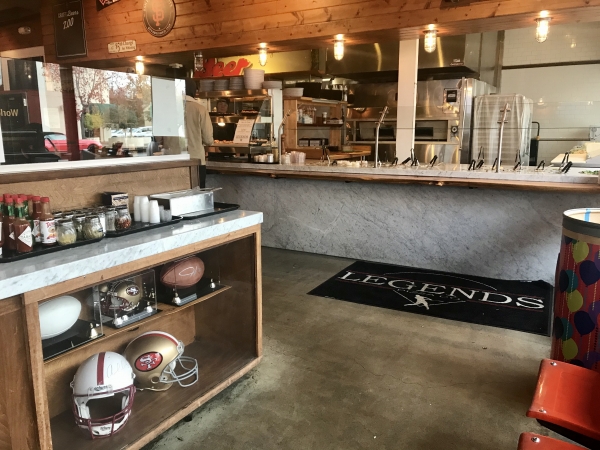 Inside what is now Legends Pizza Co. in Palo Alto. Photo by Elena Kadvany.

Twin brothers Chris and Scott Hong opened Palo Alto Pizza Co. in 2012. A friend from high school, Nick Minarik, owned Legends Pizza in San Jose, where Chris worked for a year before convincing his brother and Minarik to open Palo Alto Pizza Co., according to this Palo Alto Weekly article. Minarik became co-owner and gave the brothers a few Legends recipes. Legends makes its pizza dough fresh daily from sourdough, according to the restaurant website.

The newly opened Legends in Palo Alto serves more than 20 pizzas, or customers can create their own by choosing a crust (thick, thin or gluten free), sauce and toppings. A small pizza with no extra toppings costs $13.99; a medium, $19.99; and large, $24.99. Best-selling pizzas include "The Legend" with pepperoni, sweet red onions, green bell peppers, mushrooms and Italian sausage (which appears to have been named "The Cardinal" on the Palo Alto Pizza Co. menu) and the chicken bruschetta, thin crust pizza with a creamy garlic sauce, garlic chicken, marinated Roma tomatoes, basil and Parmesan cheese.

The Palo Alto pizzeria also offers a lunch special: a slice of pizza, small salad and soda or two slices and a soda for $9.99.


I checked their menu,and I don't see vegan options - not sure if crust is vegan, but there's no option for vegan cheese. I wish more pizza places would provide more choices for vegans.


They want to stay in business so yes, no vegan cheese.


Can't wait to try it. Not sure why an extra option would run them out of business in a city known for acceptance and diversity. Does the cheese stink that bad?

Report Objectionable Content
+   7 people like this
Posted by food nerd, a resident of Another Palo Alto neighborhood,
on Dec 3, 2019 at 6:11 pm


@Ryan, Vegan cheese is horrible. I say this as someone who WANTS to move to vegan cheese. I'd be happy with just vegetarian cheese (no rennet). The only halfway decent brand of vegan cheese is Kite Hill but only the cream cheese and soft brie-like cheese are sort of comparable. I can't see serving vegan cheese at a pizza place. Vegans: order something without cheese. It is possible to get decent cheeseless pizza.

Report Objectionable Content
+   4 people like this
Posted by resident, a resident of Downtown North,
on Dec 5, 2019 at 7:53 am


Why do Americans love cheese so much? The pizza we had in Italy has little or no cheese.

Report Objectionable Content
+   7 people like this
Posted by Cheese is dairy, a resident of Downtown North,
on Dec 5, 2019 at 7:20 pm


"vegan cheese" is an oxymoron. Cheese is a dairy product. Period. An artificial vegan concoction is not cheese. Just like almond milk is not milk. Do not expect pizzerias to have much in the way of "vegan" options. In fact how can a vegan even eat at a pizzeria since everything is "contaminated" with meat and dairy products.


resident, a resident of Downtown North, wrote: "Why do Americans love cheese so much? The pizza we had in Italy has little or no cheese." Some pizzas in Italy have lots of cheese, some have none. In some ways, the concept there is more free-form, not the tomato-sauce-plus-cheese-plus extras formula of American pizzas. (What Americans think of as a "classic" pizza is a completely American invention, along with large diameters, and wedge slices.) Also, until relatively recently pizza was rare in "Italy" outside of Naples -- a regional specialty, not a national one. To answer the question though, Italian-American food adapted to the more abundant meat and dairy products in the "New World" so that it is mostly unrecognizable to Italians, and much richer in calories. And agreeing with later comments above, yes cheese is a milk product. Seeking dairy-free cheese is like wanting low-calorie butter: the quest itself creates some contradiction and tension.

Report Objectionable Content
+   5 people like this
Posted by Nutritionist, a resident of Barron Park,
on Dec 6, 2019 at 2:38 pm


> Italian-American food adapted to the more abundant meat and dairy products in the "New World" so that it is mostly unrecognizable to Italians, and much richer in calories. And as a result, people who eat meat/cheese laden pizza on a regular basis (1-2 times per week+) consume far too many saturated fats, refined carbohydrates, gluten & sodium. Nothing wrong with enjoying a pizza from time to time but given the rampant examples of obesity in this country along with high blood pressure & diabetes stemming from gluttony & poor food choices (excessive fats, refined sugar/carbohydrates & sodium) ...well, in some ways chronic irresponsible diners have to take some responsibility for the health problems they may encounter later down the road. While it may be 'normal' to be 5-10 lbs. overweight at times, no sympathy here for grossly obese people. They made their bed based on an overall lack of self-control.


I've had Burnt Ends of brisket at the Smoking Pig and Sharks games, but never Leg Ends on pizza. (If you recognize my byline you may recall I made a similar dumb crack about the new restaurant downtown that serves either "bird" or "dog".....


Which reminds me of a West Indian family that had me over for pig's feet at Christmas....


The best thing about Palo Alto Pizza Co. was that they sold fresh pizza by the slice during the week at lunchtime for $4...I wonder if they will continue this option or just do the $9.99 "lunch special" with all the stuff I don't want, i.e. a sugary drink and a pass through an underwhelming salad bar?


Hello. My name is Nick Alongi (The other Nick) and I'm one of the owners in Legends Pizza Co. We do carry Vegan options. Our cheeseless Veggie on a Gluten Free crust gives you a vegan pizza, and it's very tasty! We also sell pizza by the slice, Just as Palo Alto Pizza did. We love to hold fundraisers and we also specialize in catering and cater to many Silicon Valley companies. Please come check us out!

"It's too little too late" and other reasons why not
By Sherry Listgarten | 13 comments | 4,133 views

Couples and Premarital: Parallel Living: What to Do
By Chandrama Anderson | 0 comments | 2,300 views