Gopinathan, who goes by "Sri," will not be leaving Campton Place, where he's earned Michelin stars for nine consecutive years, and plans to split his time between the two restaurants, he said in an interview. Ettan is slated for a January 2020 opening at 518 Bryant St.

Gopinathan met the owner of Ettan, Ayesha Thapar, while she was dining at the two-star Campton Place several years ago. She called afterwards, expressing an interest in partnering for her forthcoming Indian restaurant, Gopinathan said. Ettan (which means "breath" in Sanskrit) is the first restaurant for Thapar, an Atherton resident who has worked in a range of industries, from internet marketing and real-estate development to fashion, and spent about half her life in India.

Gopinathan, a native of Southern India, attended the Culinary Institute of America (CIA) in New York and trained in a Michelin-starred restaurant in England before coming to the U.S. He said he was drawn to the Palo Alto project as a means to educate U.S. diners about the depth and breadth of Indian cooking.

"I am trying to move the so-called boxed Indian food from one corner to the mainstream," he said. "I also feel that after a very long time of doing fine dining, which I still enjoy ... I also want to do fun dining — little more fun, more casual food." 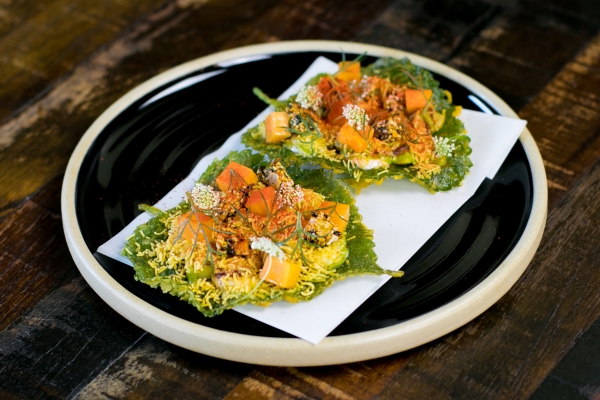 Gopinathan, who is in the midst of putting the finishing touches on the Ettan menu, described the food as casual "Cal-Indian," the cuisine he's drawn accolades for at Campton Place.

There will be dishes like crudo with fresh coriander seeds, jalapeño oil and a fermented chili sauce; Gulf shrimp topped with coconut sambal and curry butter, wrapped in a banana leaf and cooked over an open fire; a kebab made with tender jack, a vegetable version of jackfruit that tastes like chicken when cooked, he said; and kozhukattai, a South Indian dumpling Gopinathan will fill with marinated ricotta, shallots, pistachio, raisins and garam masala.

He's working on a pork belly dish that uses spices from Coorg, a high-altitude mountain region known for producing spices and coffee. He's envisioning covering the pork belly in a complex spice mixture and slow cooking it, then serving it with a soft bread and homemade pickles for a make-your-own wrap.

Much of the menu is inspired by the food Gopinathan ate growing up in Kerala in Southern India, though he doesn't want to box Ettan in as a Southern Indian restaurant. He also takes inspiration from traveling throughout India and more than a decade of living in California. 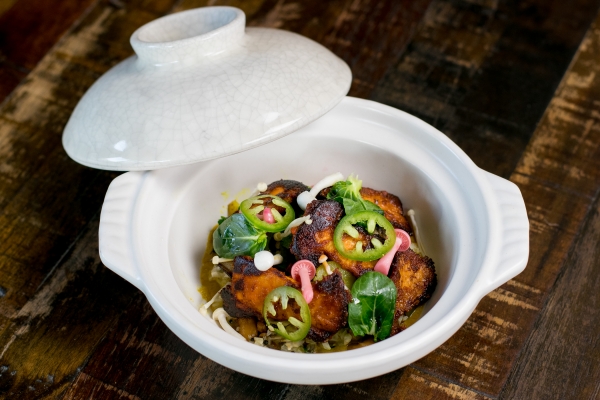 A winter "mushroom one-pot" korma with pickles and jalapeño at Ettan in Palo Alto. Photo by Isabel Baer.

While the focus is on Indian ingredients and dishes that are lesser known in the U.S., Ettan will have a secret menu with all the classic dishes expected at a local Indian restaurant like butter chicken and garlic naan, Gopinathan said.


Love it! Great addition to the PA food scene.

My wife and I have been enjoying Indian food since the late 1960's. We always have nice Saturday morning wake up snack at the "Indian Street Food" stand in the PA farmers' market behind the post office. A shot of their turmeric, ginger and lemon drink beats coffee LOL.


Recipe for Sucess for Indian Restaurant these days:
Investor: Famous I.T. Guy (or a Gal) Conditions: Must be famous and must have deep deep pockets
Chef: Michelin Star
Designer/Architect: Someone Famous
Food & Cocktail Presentation: Stunning, Taste: If your eyes are satisfied, It doesn't matter.

A good idea can make you super-rich fast If you play your cards right Or unless until you have really deep pockets and willing to take a risk. For Restaurant business it will make you or break you in no time. However and yes again, deep pockets play a huge role here.

The early 90s was an era when there were only "fine" Indian Restaurants existed. Same boring(to me)Instrumental music, dark red walls, curtains and the heavy smell of Indian spices(aka curry to non-indians). Mid 90s small take out/Dhabba Style Restaurants like Shalimar popped up. It took some time for the trend to follow but when it did, It was a big hit. I remember going to Gaylord in Gharedelli square in S.F. I had Chicken Vindaloo (super delicious)and it was $30.00. When the time changed, Restaurants like North India and Gaylord were gone and Places like Shalimar which were in a location full of homeless people were packed and they were selling Chicken dishes for $7. It was a big hit! People didn't care how the place looked, they wanted a $7 dish versus $30.00. Right around that time Mr. Bush became president and Corn Oil Which used to be $7 for a big 30-liter bucket became $30 overnight. Whatever the scenario was it was a big success for Dhaba style Restaurants which lasted for a very long time. There were very few high end/Wannabe high-end Restaurants still existed like Amber, Pasand, Gaylord, and Swagat to name a few. Other than Amber, All these high end (or wannabe) had one thing in common, I.T. Investors but not really any Michellin star chefs at that time. Food was not that bad but the presentation was just okay. At that time period, there was also another concept, All you can eat Lunch and Dinner Buffet. Cheap food but not good at all by any means. I.T. guys rushed into this concept and opened restaurants left and right. Someone said If you want to be the successful name your restaurant starting with letter S. There goes Swagat, Suraj, Sneha, Sitara, Sitar and so on. Restaurant owners were getting rich and side fall of that was they were getting targeted with lawsuits whether they were made up or not. Read about Lakireddy Bali Reddy, Man known as God for some and devil for others. He made his fortunes in the Restaurant industry and was convicted of some heinous crimes. I am not here to judge anyone but after I did my research on this matter at that time, it sounded like he was a target just because he became super-rich in no time. Whatever the case was he served his time and I hope Victim/s moved on with his or their life.
There was a big problem with that though, These Investors had money but zero cooking skills, So Chef/Cook was treated like a king and he was above everything! Economy Changed, most of these Restaurns got closed because Sale Volume became very less and they couldn't afford to do all you can eat buffets anymore. I remember, In early 2000 when CEOs of Companies which were shut in 2000 burst would come in a group of 4 and spend around $350.00 on Black Labels and Seafood but when everything went haywire same guys would ask for a discount on a $12 buffet. One guy also said to me that he goes to Sikh Temple to get a $1 meal on Sunday ($1 given as prayer offering). Believe it or not, At one time there was a group of 12 people came to have lunch buffet at my Restaurant, 11 of them left $1 tip each and 12th guy grabbed all the tip added another dollar and paid his bill. I did not say anything because definitely he needed the money more than I did.

Fast-forwarding to 2010 Dosa opened in Mission and it was a huge success. It took little time for the trend to change again but when it did, the economy being so strong, People (I.T. guys) went crazy and they were investing money in this (fine dining) concept again. At the same time, another concept was started, Indian Burritos. A group of Mortgage brokers started this concept. CEO of this concept was/is a great businessman with a vision to go big!
If you take a look now, Who has the most money? I.T. Guys. and since the trend is changed now, the bay area is getting flooded by these types of place restaurants. Rents have been so high, It just doesn't bother them, they don't even have a problem buying the building or spend a few million dollars on a Rented building. So, We have very high rent, very highly paid Executive Chef, Head Chef, and the average salary for the rest of the staff. Usually, numbers go like this: Food cost 30% Labor 30% Overheads and rent 12%
Now taking the scenario with these high-end restaurants, food cost is the only thing you can cut. You cant cut the labor cost of expensive Executive Chefs or rent. So here how it goes now, Food Cost 20% Labor 35% Overhead and Rent 17% You must be wondering how the food cost can be that low now? Well, that is because of the small food portions. I have been to most of these restaurants, From Ambience to Food presentation, everything looks great! I think it is about the overall experience. I also have been to very high-end restaurants in India, Where mostly foreigners or rich people eat (someone else paid my tab)Service was impeccable, Place looked pristine, no flaws I could find, decent portions but the food? Bland! It was super busy and If you had no reservation which is made months in advance, You had no luck.

Where do I see this going? In 2019 lots of Restaurants closed doors due to ridiculously high rents, labor cost and lack of costumers coming into the doors. Amber in Palo Alto is almost done with their lease and now the landlord is asking for $29000 in rent, Dosa closed in Mission District and many other types of cuisines did too. It makes me wonder, Doesn't the landlord think, Even if someone does pay the asking rent, how long the new tenant will survive for? To me if Anjan Mitra and Vijay bist decided to leave because they know they will not be able to make money with current rent, Who will? Who will take this big chance? These fancy Indian places at this moment are doing very well but the question is how long this trend will survive for. Being in the Restaurant Industry for over 20 years, All I wish them is well.

About me: I have been in the Restaurant Industry since I was 18. I do not own any kind of Restaurant in the S.F. Bay Area.

Report Objectionable Content
Posted by PAfoodie, a resident of Downtown North,
on Dec 29, 2019 at 7:16 pm


@G Singh: what wss the name of your restaurant when you owned/ran one? Why did you exit? High rents? High labor costs? Or something else?

How Much Time do You Spend Outdoors?
By Chandrama Anderson | 0 comments | 1,393 views