The owner of Una Mas and the landlord gave conflicting explanations for the closure. 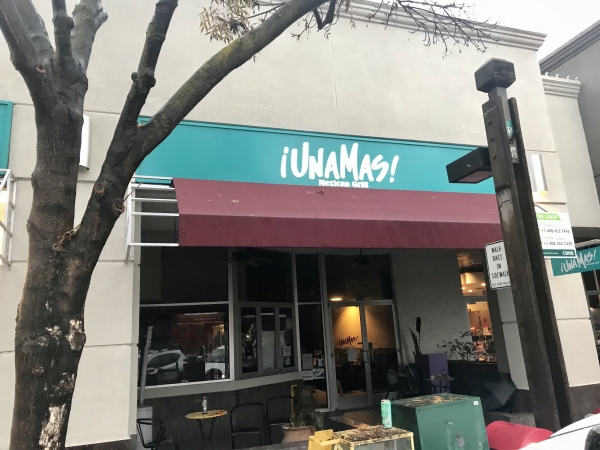 The downtown Menlo Park location of Una Mas Mexican Grill, between Walgreen's and Starbucks, has closed. Photo by Elena Kadvany.

Mike DiPietro, president of Golden Bay Investment Group, Inc., which owns Una Mas Mexican Grill, said that after months of negotiation on a lease renewal the Menlo Park franchisee, was unable to secure an affordable rent. The landlord, he said, wanted to increase the monthly rent to over $13,500, "an unsurmountable amount for any fast-casual restaurant."

Tricia Guidace, who owns the building, said that number is "vastly inaccurate" but wouldn't comment on why they were unable to reach agreement on a new lease.

"We were looking forward to continuing the relationship and it just didn't work out that way when it got down to it," she said.

Una Mas has operated there since 1994, Guidace said. She declined to disclose how much rent the franchisee was paying before the lease expired and DiPietro did not respond to that question via email.

Guidace also declined to state how much the space is being offered for now, though she said it's "considerably lower" than the amount DiPietro quoted.

DiPietro said Una Mas has offered employment to some, though not all, of the Menlo Park employees.

Locally, there are Una Mas locations nearby in Mountain View, Redwood City, Sunnyvale and Cupertino.

In related news, downtown Menlo Park businesses report a significant drop in the number of customers running straight for the bathroom due to some urgent 'business'?

Report Objectionable Content
Posted by Local Resident , a resident of Menlo Park,
on Dec 6, 2019 at 12:49 pm


Good luck renting it out with all the homeless people hanging out out front and the sent of urine wafting through the doors. Landlords should be demanding that the city clean up the downtown, not raising rents. There are several vacant storefronts, the sidewalks are dirty and peppered with belongings from the local homeless population. It's a sad state of affairs.


I'm sorry to see Una Mas go, as it was good place to go for inexpensive, fast Mexican food. I'm not sure who can afford the rents these days.

BTW, the Menlo Park Chamber of Commerce advocated for a downtown toilet for the homeless, but the merchants turned it down.