Uploaded: Dec 6, 2019
Su Hong Palo Alto is back, albeit under a new name and owner but with the same food beloved by generations of customers.

The longtime Chinese restaurant at 4256 El Camino Real closed in September. Owner David King, who had run Su Hong locations in Palo Alto and Menlo Park since 1977, retired in advance of a proposed development that would replace the El Camino Real building with a five-story, 51,300-square-foot boutique hotel. 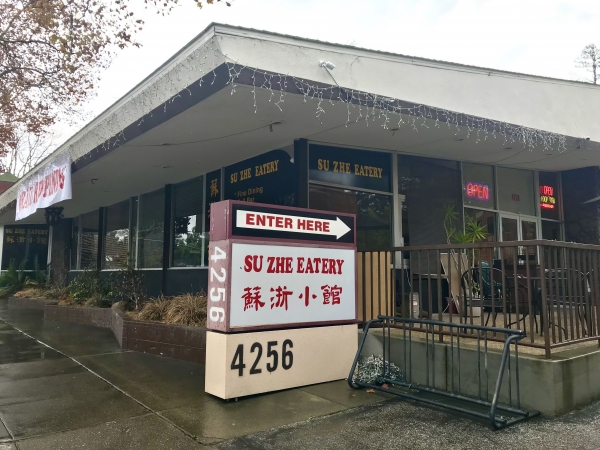 Hua Shi, who worked as a waiter at Su Hong Palo Alto three years ago, has since taken over the 3,300-square-foot restaurant. He reopened it last week as Su Zhe Eatery. A large "grand reopening" sign hangs outside the restaurant's windows.

Beyond new carpet and a fresh coat of paint on the walls in the dining room, "everything is the same," Shi said. The same chef is in the kitchen, though he plans to hire one or two more. The menu is largely the same but Shi said he's using new meat, seafood and produce suppliers to bring in more fresh products. He's going to Chinatown in San Francisco every other day to pick up fresh, not frozen, meat and seafood.

Shi, a native of Shanghai, also plans to add some regional specials to the menu.

Like Su Hong, Su Zhe Eatery will be open for lunch and dinner and offer takeout and catering.

A similar takeover happened at Su Hong To Go in Menlo Park in 2015, when owner Bee King sold to a new owner, who renamed the popular eatery Chef Kwan’s but preserved the chef and menu.

Shi and his manager said they're not worried about the proposed hotel project, which they think won't come to fruition for another year or two.

Samuel Gutierrez, the city planner assigned to the project, said the city has been working on the environment impact report and is set to publish it by the end of the year. He anticipates the project going to the Architectural Review Board for a third hearing in early 2020.

What happened to the plans for the 5 story hotel at that location? I'm confused.

Report Objectionable Content
Posted by Chicken, a resident of Charleston Gardens,
on Dec 6, 2019 at 1:58 pm


Kung Pao-- read the end of the story:

"Shi and his manager said they're not worried about the proposed hotel project, which they think won't come to fruition for another year or two.

Samuel Gutierrez, the city planner assigned to the project, said the city has been working on the environment impact report and is set to publish it by the end of the year. He anticipates the project going to the Architectural Review Board for a third hearing in early 2020."

Report Objectionable Content
Posted by Good news, a resident of Downtown North,
on Dec 6, 2019 at 2:24 pm


This is good news.


Do they have a website site yet? Not seeing it listed.
What are the hours/days of operation?
So thrilled. Miss Su Hong so much!
The Su Hong chef was fantastic and so glad she/he remains!

Report Objectionable Content
Posted by Memo to MRB, a resident of Mountain View,
on Dec 8, 2019 at 9:31 am


Many independent restaurants today don't have websites, or they only get around to hiring someone to put up a website for them after years in business. In fact if the restaurant is good, and word-of-mouth brings in ample trade, a website may not be a priority at all.

Online "presence" isn't necessarily a relevant or natural measure for this type of business. Some of the hokiest corporate chains have very attractive, well-funded websites.


> What happened to the plans for the 5 story hotel at that location? I'm confused.

>> "Shi and his manager said they're not worried about the proposed hotel project, which they think won't come to fruition for another year or two.

^^^ Since it take roughly 2 years for a new restaurant to either 'make it or break it' what's the point of this endeavor?

If the new restaurant proprietors do not actually own the building/property, they are screwed regardless of how good the food is or the supportive clientele.


Report Objectionable Content
Posted by You spelled the name wrong, a resident of Palo Alto Hills,
on Dec 8, 2019 at 11:24 pm


It's not Su Xhe. It's Su Zhe. Please be respectful of the intricate Chinese spellings! Thank you.

Report Objectionable Content
Posted by CrescentParkAnon., a resident of Crescent Park,
on Dec 9, 2019 at 11:38 am


>Please be respectful of the intricate Chinese spellings!

Maybe you should not infer disrespect where none is most likely intended.


It is clearly marked on the sign in the photo
Su Zhe Eatery Would you spell it Mc Dogald and think it was right?
It is the main reason why the article was written Su Hong is now Su Zhe Eatery


This is fantastic news! Su Hong is the only Chinese food I ate growing up in Palo Alto, and it's still my ultimate comfort food. I've been mourning their closing, but drove by today and my heard leapt when I saw the Re-Opening sign. It's a Palo Alto style holiday miracle - against all odds much beloved small business finds a way to hang on just a while longer. Thank you Hua Shi for carrying on a Palo Alto tradition!


I seen the menu and it conflicts with the signs spelling.

Su Xhe Eatery or is it Su Zhe Eatery or Suzhe Eatery on yelp
or does anyone care? Could be a translation problem but it also cause customer confusion

Report Objectionable Content
Posted by Jonathan Anonuevo, a resident of Stanford,
on Mar 3, 2020 at 3:56 pm


Are there any web designers/developers who would be willing to offer Su Zhe Eatery a pro-bono website? If you already offer a website-as-a-service, I'm sure you can quickly build a simple to navigate no-frills website as a community give-back project. Do it!

How we eat away at our open space, even in Palo Alto
By Sherry Listgarten | 5 comments | 7,401 views