Uploaded: Dec 13, 2019
People seem to be perpetually lined up outside Sweet Maple in San Francisco, waiting for the restaurant's popular brunch -- particularly, the thick, indulgent Millionaire’s Bacon the restaurant has become known for.

Come 2020, downtown Palo Alto will have its own location of Sweet Maple at 150 University Ave.

The space is currently occupied by Indian restaurant Amber Dhara. Sweet Maple owner Hoyul Steven Choi said the restaurant must leave by the end of December. The owner of Amber Dhara, Vijay Bist, did not immediately return a request for comment. According to a sign later posted in the restaurant's windows, Amer Dhra closd on Dec. 24, 2019.

Sweet Maple Palo Alto will have two things the San Francisco original doesn't: dinner and a full liquor license. During the day, Sweet Maple will serve its breakfast and lunch fare, which includes the typical omelettes, eggs Benedicts and pancakes but also deep-fried French toast and the applewood-smoked Millionaire's Bacon, which is cut thick and baked with brown sugar, cayenne, red and black pepper. 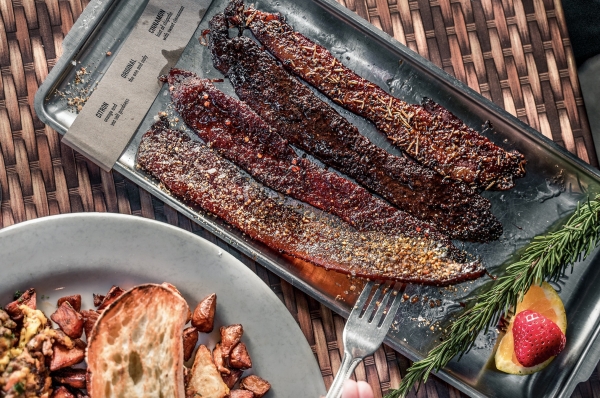 But dinner at the Palo Alto eatery will reflect more of Choi and his wife's roots. They both came to the Bay Area from South Korea. Choi described the dinner cuisine in Palo Alto as "New American with some modern Korean mixed in."

"For a lot of people down there you can consider it (an) introduction to Korean cuisine," Choi said. "But it's not going to be full-blown authentic Korean."

Choi immigrated from Busan to San Francisco in 1984. He's a scientist by training: He studied molecular and cell biology and physics at UC Berkeley and went on to conduct biotech cancer research and treatment, including at Stanford University. (He said he didn't leave campus too often to eat but recalled meals at Tamarine and Wolfgang Puck's long-ago-closed Spago in downtown Palo Alto.)

While working at Stanford, Choi and his wife took over Taylor Street Coffee Shop in San Francisco's Union Square. In 2006, they took over Fred's Coffee Shop in Sausalito. Four years later, they opened the first Sweet Maple in Lower Pacific Heights.

Choi said they've been searching for the right space on the Peninsula for awhile and jumped at the opportunity to be in downtown Palo Alto, which he described as the area where "the millionaires and billionaires work and live."

"This will be our biggest project so far," he said. "We are taking it very seriously."

He's aiming for an August 2020 opening. After Palo Alto, he plans to open another restaurant in the South Bay, possibly in Cupertino.

Report Objectionable Content
Posted by PAresident, a resident of Downtown North,
on Dec 29, 2019 at 8:39 pm


There's an interesting dynamic that happens when rents for retail space in the downtown Palo Alto area spiral out of control -- the owners of the restaurants have to jack up their menu prices sky high to make their rent payments. With sky high restaurant menu prices, clientele dwindles and that in turn makes them un-viable long-term causing them to shutdown.

I wonder why restaurateurs keep flocking to downtown Palo Alto when they know the high restaurant churn rate here which should tell them that ultimately spiraling rents and greedy landlords will force their hand to shutdown! Oh well.

This barbecue business was kicked out of Belmont. Now it's a Sunday fixture in Redwood City.
By The Peninsula Foodist | 2 comments | 4,353 views

Can the Memphis police behavior ever happen here?
By Diana Diamond | 20 comments | 1,306 views